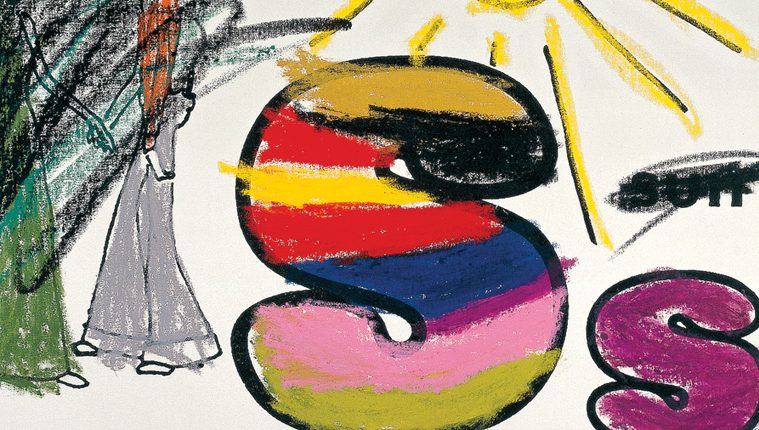 A Collision of Thoughts

Born and bred in New York City, remedy artist Glenn Ligon infuses the sumptuous surfaces of his paintings with the iconoclasm of a smart, young, super intelligent malcontent. Though he works across media with great agility — installation art, photography, appropriation, and painting — Ligon foundationally connects himself to painting.

“Painting is a touchstone for me,” Ligon says. “But I wouldn’t say I am a painter. I started as a painter, and I have returned to it over and over again.” Insomuch as painting for Ligon brings a heady brew of influences, it is an open mode of expression. “Even the painting I do is informed by other kinds of mediums.”

Beyond an open-ended and protean sense of painting, it is arguably the words that bring forth such heterogeneity in his work, now showing in America, a mid-career retrospective currently on view at the Modern Art Museum of Fort Worth, thru June 3. Reportage from newspapers, text from fiction, words from poets, passages from a stand-up comedy routine: all verbiage is potential material for Ligon’s strategy of quotation. Many of the texts Ligon quotes are historically and politically loaded. Yet like any good artist skilled in thwarting an interviewer’s will to categorize, Ligon distances himself from the political punch of some of his text-base works.

More like Warhol than Kosuth or Baldessari, the words on his paintings are a matter of subtle appropriation framed as arbitrary and ignited by specific contents. The black words on white surfaces of “Learning Disability and a Temper” and “A Loner, Shy, and Sad,” both from the Profile Series (1990–1991), seem upon first blush to be flat, dumb descriptions of young scofflaws simply pulled from the newspaper. Presumably taken from media coverage surrounding the infamous Central Park jogger case of 1989, they read “the 16-year-old youth has had a learning disability since birth” and “the 15-year-old, who is charged with raping and beating the victim with a pipe, was described as a particularly shy boy.” Ligon does not so much show sympathy for the criminals by quoting the newspapers or police reports, but, in high Warholian fashion, reflect back to us the valuable media currency, even spectacle, that is crime, poverty, ignorance, abandonment, and stereotype.

Painted in 1988, “I AM A MAN” is another textual quotation rendered in paint. With bold black sans-serif words atop an imperfect white background, Ligon’s painting-cum-sign pays homage to the sanitation workers carrying similar signs while on strike in Memphis in 1968, the same year that Martin Luther King Jr. was assassinated. Ligon neither saw the strike nor the strikers’ signs; rather he came upon an original copy of the sign framed in the office of a friend. It was, to Ligon, “an artifact” — something symbolic of a lost time. Ligon is very interested in the life of an image or words in press. Their value as historical objects comes into play in his strategy of quotation: “I am interested in how the past is present in the present. I am interested in the way a particular cultural moment resonates in the present or I am interested in bringing those moments into the present.” It thus follows that Ligon’s strategy of quotation bears within it an acute sense of time — the futurity or obsolescence of an image or textual passage.

While Ligon’s many paintings, signs, and installations are concerned with externally produced mass media — press that is simply out there — it is safe to say that the entire exhibition is about internal excavation. That is, it is a beautifully wrought disinterring of Ligon’s “self.” Yet, here is waged a sense of personal identity that engages all, or dare I say, that is universal. Ligon’s America is truly about who he is but also who we are, how we relate to him, and he relates to us. Though he is wont to distance himself from the 1990s discourse of identity politics, there is a lot of art in America that is concerned with “identity,” primarily black and gay identity. It is ultimately, nonetheless, language that is the source of making images for Ligon. In like thinking, we might take away from Ligon’s powerful and omnipresent use of language the idea that one’s identity, one’s self, is constructed by the many vectors of information, both language and images, that constitute the mass media.

A particularly powerful and unique instance of quotation, celebrity, stereotyping, and monochromatic painting uniting into one force is Ligon’s Richard Pryor paintings. They are monochromatic canvases in orange, black, and purple bearing passages from Pryor’s stand-up routines. Ligon appropriates the lurid and hilarious language of Pryor — discussions of phallus size, copulation, the use of the N-word — rendering it intentionally messily by way of a stencil onto flat surfaces. Forcefully present, those words when placed on a canvas give Ligon a periscope that becomes a mirroring surface for us to look back to the time in which they were spoken and then at ourselves now, to query questions of political correctness, outright bigotry, and circuitous racisms in 2012. When asked about the use of the N-word, Ligon, once again sounding like Warhol, rebuffed the pointed politics of the term, explaining that he is interested in the relationship between text and speech in the paintings. “Richard Pryor is a comedian who is performing a text rather than writing a text,” he said. True, but oh what language, brilliant and vulgar at once! And oh what history it made!

Ligon’s will to quote tells his viewers of the cutting insights that come from displacement and re-contextualization: speaking the words of another and removing something from its original context in order not simply to place it elsewhere but to do so with the effects of revealing its underbelly, warts and all. Similar to the appropriationist work of Sherrie Levine, “Notes on the Margin of the Black Book” (1991) is a set of photographs of African American men taken by photographer Robert Mapplethorpe and published as the Black Book in 1986. Ligon took his images directly from Mapplethorpe’s book, leaving the page numbers visible in the framed image on the wall. Along side Mapplethorpe’s photos of smiling black men, expressionless naked black men, and the dark-skinned phallus of an anonymous black man, Ligon hung framed opinions of Mapplethorpe’s book from a broad array of people, including Harvard professor Henry Louis Gates, people protesting Mapplethorpe’s work at the time, and barflies. In framing Mapplethorpe’s photos, Ligon extracts and makes preponderantly present the stereotyping of black men at work in Mapplethorpe’s Black Book. In capturing the opinions of everyday people he also distills the bully pulpit of the time, the NEA controversies of 1989–1991. The wellspring of the Christian Right, a debate unfolded on the floor of congress over what was then being called publicly funded pornography in Mapplethorpe’s exhibition, The Perfect Moment. The show was ultimately refused by the Corcoran Gallery of Art in Washington, DC., where it was slated to show, but not because of the stereotyping of black men. Rather, the Corcoran caved to special interests in government and the right, canceling Mapplethorpe’s show because of its perceived pornographic contents. Ligon’s “Notes on the Margin of the Black Book” is a record of this heated time, revealing the way in which certain denizens of the art world simply accepted Mapplethorpe’s photographs, so many stereotypes of black men as “athletic” and “well endowed,” while rejecting them, along with the religious right, as lewd and worthy of censorship.

Ligon’s work exudes and ignites language. Referencing the worlds in which we have lived and live today, the work is catalytic, a maker of debate and dialogue. It is not enough to say that the art in Ligon’s America thoughtful. Better, his work is a productive collision of thoughts.