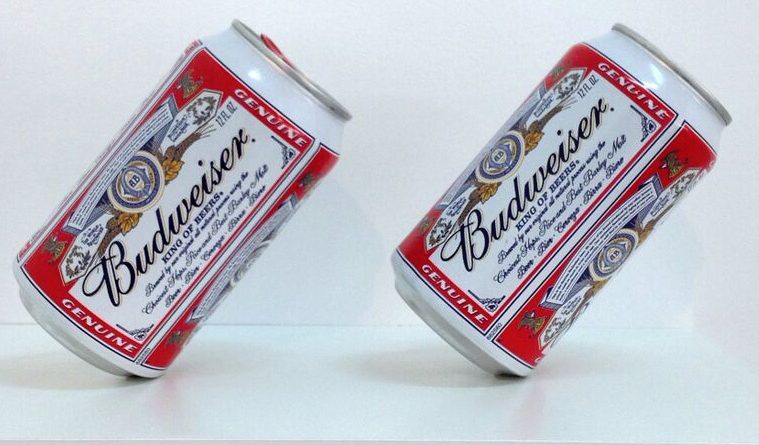 A Study in Identity

Alan & Michael Fleming, Two Balanced Cans of Beer, 2015, Aluminum Beer Cans with Plastic and Shelf 5 x 3 x 3 in Each, Edition of 1 of 5. Courtesy Cydonia and the Artists. 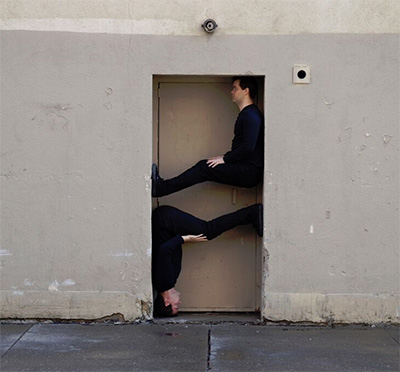 I recently finished reading Arthur Danto’s What is Art?  in which Danto elucidates the method behind developing his definition of art, so, in the interest of full disclosure, his idea of art as “embodied meaning” (something I’m naturally inclined to gravitate towards) was top of mind when I stopped by Dallas’ Cydonia Gallery to see the work of Brooklyn-based artists Alan & Michael Fleming in a solo show (their first in Dallas), entitled Gemini.

The two artists (identical twins) have built an art practice on the very nature of togetherness, how it is to be with, work with, interact with, and more, with another human. What tensions exist? How do two people, especially two people in a highly intimate relationship such as that in which twins coexist, either consciously or subconsciously, influence each other? And then, the crux of the Fleming’s challenge, how do we/they confront any of this, especially the physical aspect of a relationship, originally, thoughtfully and artistically?

The brother’s have been known, mostly, for their performances, in which they challenge their bodies in various states and stages of physical cooperation, using each other to climb a wall or tethering themselves together, as examples (I gather they engaged in one of those very performances June 27 here in Dallas at Klyde Warren Park which I unfortunately missed).

Films of a selection of the duo’s performances are on view at Cydonia in an attractive collage and although their various kinetic performances may seem an obvious illustration of other, more subconscious aspects of relationships, they’re effective in large part thanks to the sincerity the brothers effuse; the performances themselves may be a tad contrived and predictable, but the artist’s identical looks, denoting their relationship, adds a meaningful twist, imbuing the work with an emotive element which would be lacking were these movements performed by two performers at random. It’s a tad eerie watching the brothers climb, or balance one on the other, and the intersection of that eeriness with familial pathos is, for lack of a better word, hypnotic. 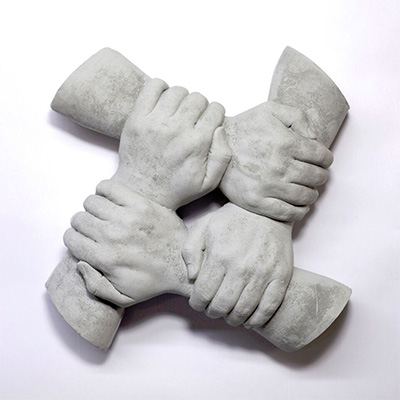 Despite the film’s inclusion, the show in Dallas, for all intents and purposes, marks a departure for the Fleming’s practice. Over the last few months the two have been experimenting with the creation of actual art objects and audiences encounter the results at Cydonia, as we see the duo delving into the question of how to translate largely subconscious notions of togetherness and identity into objects.

The two recently discovered they were identical twins (their parents were under the impression they were fraternal), something seemingly obvious upon meeting them but which can only truly be evidenced by DNA testing, so the notion of the identical is referenced often in their objects; twin beer cans, twin Doric columns (the largest pieces in the show by far) and a series of cement molded hands, in various stages of support (referencing the idea of a couple, but also their performance practice). The obvious response to these pieces is to look for differences, just as one might do upon meeting Alan and Michael, and the pieces succeed in the context of an exhibition that takes identity as its subject but are somewhat lacking individually, their impersonal fabrication (although granted, the cast hands and arms are actually those of the brothers) standing in stark contrast to the brother’s highly personal art practice.

Other works in the show tackle cooperation and the idea of two becoming one in a physical sense without losing individual differences and identity, in “Knot Drawings” and “Bonsai Training,” the two took turns drawing and sewing pieces of bonsais and knotted ropes respectively (each work is a series of multiple drawings, each slightly different), each using a different color. The meaning is fairly easy to grasp as the two grapple with the idea of being at the same time two and one, but the pieces, as with some of the other works in the show, disappointed; the bonsai and knot series are indeed quasi-personal, the artist’s hand is evident in contrast to the columns or the beer cans, but I found no interesting insight in the interpretation, obvious visual references to DNA in the “Knot Drawings” notwithstanding.

If I’m thinking, going back to Danto, about the Fleming’s work as embodied meaning, their body of work is certainly art, all of it. But theirs is a lived practice, in a way, since their work takes their lives as its subject and that kind of practice is something performance lends itself to well, a fact of which I’m sure the Flemings are aware, hence the conceit of the show; two artists who have spent years artistically illustrating their relationship through movement attempt, now, to translate those same subconscious effects of living life as a twin into objects.

I don’t doubt that successful art objects could be created from the Fleming’s point of departure, but the energy and emotion found in the duo’s performances is sorely missed in their objects which evidence themselves coolly in their refusal to engage the viewer, something which certainly has a place in art, but seems sorely out of place in the context of this show.

Gemini is undoubtedly a cohesive, well-curated exhibition, and, perhaps that’s how the Fleming’s would prefer to be judged, this is the age of the artist-curator after all, but, meaning and embodiment aside, there’s the subjective element of art at play as well, something which philosophers have yet to adequately account for. It seems a way forward may be that that subjectivity manifests itself in the need to create work that is compelling, to encourage and, in a certain sense, require,engagement, something which much of the Fleming’s work, performances aside, fails to do.