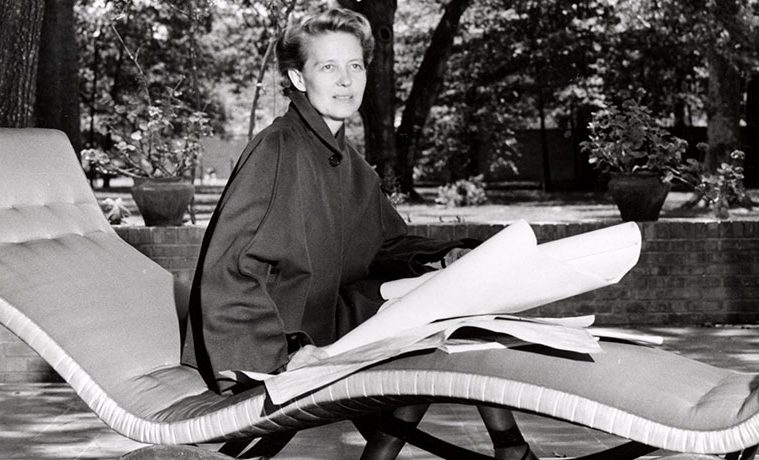 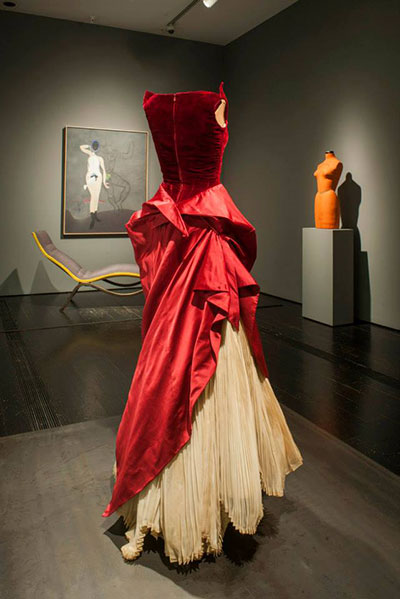 Installation view of A Thin Wall of Air: Charles James at the Menil Collection. Photograph by Paul Hester.

The Menil Collection’s modest exhibition,  A Thin Wall of Air: Charles James, is fascinating for the intimate glimpse it provides into the sensibilities of art patrons Dominique and John de Menil.  It features a selection of about a dozen dresses and coats out of the fifty or so owned by Dominique de Menil that were designed by James, considered to be the first (and perhaps only)American couturier.  John de Menil seems to have been the driving force behind the couple’s involvement with the designer.  In the late 1940s he urged his wife to start acquiring and wearing James’s designs, a preference that continued through the mid-1950s.  The culmination of their patronage was the commission in 1950, again at John’s insistence, for James to design, or as curator Susan Sutton, writes in the exhibition brochure, “to dress”, their new house, then under construction, designed by New York city architect Philip Johnson.  At the time, Johnson was a strict adherent of the “less is more” credo of his mentor, the enormously influential German-American architect Ludwig Mies van der Rohe, and was making a name for himself with minimally appointed interior spaces.  Of this appointment, Johnson wrote to Dominque de Menil (who seemed to be tasked with breaking the news) that “I admire his work as a dress designer enormously but you can imagine the disappointment of an architect when someone else finishes his work.” He continued diplomatically that “This disappointment, however, is lessened by my recognition of your incomparable good taste so I know the house will turn out to be beautiful.”

Charles James was best known for his extravagant ball gowns with evocative and surreal-sounding names like “butterfly,” “four-leaf clover,”, “swan,” “umbrella,” “lobster,” and “tree.”  They were sculptural and often supported by elaborate understructures, harkening back to the French 18th-century royal court and to the highly structured garments of the Victorian era that were then near the peak of their unfashionableness.  James, in fact, considered himself to be an artist working in the medium of fabric rather than a dressmaker, which is also partly why his studio eventually went bankrupt in later years.  According to Sutton, James “saw his garments as carapaces that surround the body and permit a metaphoric extension of it.”  The word “carapace” is apt.  James seems to have been designing dresses that could physically change the wearer’s body into a more perfect form.  The “wall of air” from the exhibition’s title is describes the resulting voids between the ideal proportions of the dress and the actual shape of the wearer’s body.  It wasn’t all platonic, however; there was also an undercurrent of subtle eroticism in his designs that was never far from the surface.  This aspect is what makes his dresses for Dominique de Menil so intriguing.  Today, more than 25 years after the Menil Collection was inaugurated and 17 years since she died, her biographical treatment is becoming increasing hagiographic.  The works of this exhibition that once caressed her body conjure her corporal existence in a compelling way. 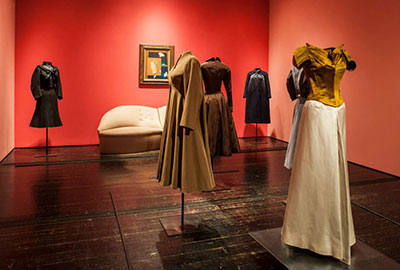 Installation view of A Thin Wall of Air: Charles James at the Menil Collection. Photograph by Paul Hester.

The dresses in the exhibition are surprisingly plain considering the flamboyant sensibility for which he is known and strongly suggest Dominique de Menil’s own personal preferences towards regal understatement.  A benefit for visitors to this exhibition is that their apparent simplicity actually serves to highlighttheir unusually expressive,structural detailing.The equally simple, but thoughtfully arranged galleries highlight the dresses with walls painted specific colors with personal meanings for the Menils and for the works in the exhibition that are paired with furniture from the house and artworks form the collection.

In the first gallery, most of the walls are painted “surrealism gray”, a color first formulated by Dominque de Menil for use at Menil-sponsored art exhibitions the University of St. Thomas and at Rice University beginning in the 1950s.  This gallery is anchored by the most dramatic dress of the show, a concert gown designed in 1949 nicknamed the “March of Dimes Dress” because James made eight of them to be worn on the runway during its annual gala that year in New York.  (It is not known if Dominique de Menil was actually one of the participants).  It has a scarlet velvet sleeveless bodice sitting on top of an irregularly gathered scarlet satin overskirt that contrasts with an evenly pleated, thinly woven white cotton petticoat below.  The wall directly behind the dress is pale aqua, a reference to walls of air.  The bodice shows James as a tease.  Instead of a plunging neckline, there suddenly appears an erect velvet ruffle coyly preventing a view of bosoms.  Similarly, the sideways flaring overskirt simultaneously emphasizes the erogenous zone while concealing its true form.  This dress rests on a raw steel base, one of several that were specially fabricated for the exhibition by George Sacaris.  This material was selected because James also used it for the legs of a chaise lounge that he designed for the Menil House that is also in the front gallery.  The Max Ernst painting, “Return of the Beautiful Gardener,” hung directly above the chaise shows a female figure with exposed, white painted lungs, suggesting the idea air as well as the physical aspect of breathing, an act that would have been accentuated by someone wearing the tightly fitted the scarlet bodice. 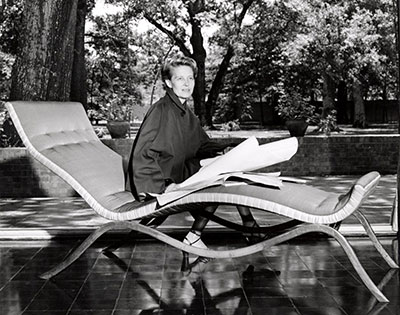 The left gallery is painted shades of pink and magenta that are similar to those of thebedroom hallway of the Menil House that James lined with colored felt and velvet.  Directly facing the visitor is an evening ensemble consisting of a tightly fitted gold-toned silk chemise over a cream colored, floor length skirt.  A single pleat runs down the front center of the skirt starting just below the waistline.  It juts out like a knife edge, suggesting overtones of vagina dentatas.  The rear wall is anchored by the sinuous two-part “lips” sofa that James designed, and which took three years to complete and cost about $6,000 (in 1952 dollars no less!).  Its curving form is said to have been derived from a 1934 Man Ray painting,  Observatory Time—The Lovers, that showed giant pair of lips floating in the sky.  Next to the sofa is a very prim black wool dress with a big satin bow around the neck that Dominque de Menil liked so much she wore it in 1984 to the opening at the Grand Palais in Paris of La Rime et la Raison, the first major showing of their collection in Europe.  This dress is also more complex then it at first appears.  Its upper half is made up of several staggered layers of fabric that slightly pull apart as the wearer moves almost like the gills of a fish or feathers on a bird’s wing.

The side walls of the right gallery are painted a shade of pale blue that was used on Dominique de Menil’s bedroom and the rear walls is dark green similar to the color of John de Menil’s study.  A saffron colored silk damask evening jacket almost glowing against the green wall immediately draws the eye.  A 1949 photo of it in action during the opening of a play at the River Oaks Theater with Philip Johnson in attendance shows the transformative power of the outfit.  Dominique de Menil stands erect, otherworldly in her perfect posture enhanced by the complex waves of damask spreading from her neckline.  On either side of this gallery are hung two whimsical paintings by Victor Brauner who Dominique de Menil said had a similar sensibility to color as James.

A much larger presentation of James’s work is currently on display at the newly inaugurated Anna Wintour Costume Center at the Metropolitan Museum of Art.  It is the “macro” to the Menil’s “micro,” and between the two of them it is satisfying to see the career of underappreciated artist getting some serious attention.

A Thin Wall of Air: Charles James
The Menil Collection
Through Sept. 7