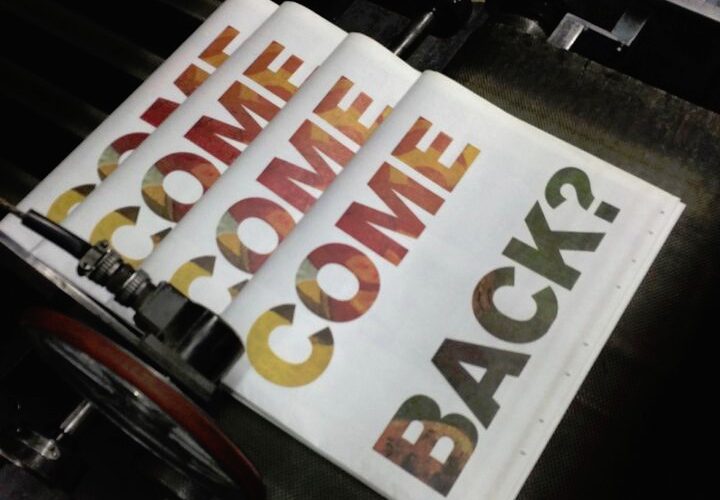 Aaron Krach: Will You Come Back? 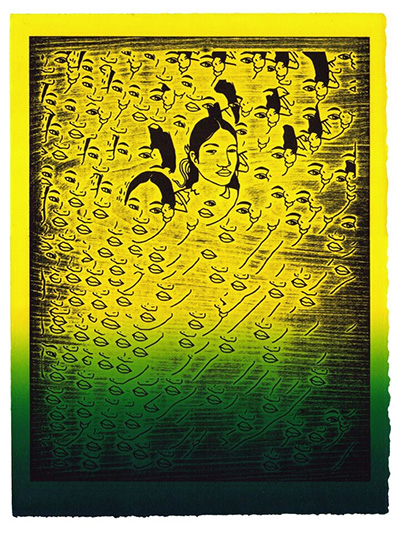 Aaron Krach, Why Are You Leaving? Where Are You Going? Will You Come Back? 2015 Woodcut on Paper.

So what happens when a masterpiece by Paul Gauguin, specifically NafeaFaaIpoipo?  (When Will You Marry?), painted in 1892, gets purchased for 300 million dollars by an anonymous collector in Qatar?  Aaron Krach seized on this situation with  a conceptual art installation at Dallas’ Reading Room, on view through July 11, that probes the various implications of this new cultural condition, expanding the field of possibilities about how to consider and respond to personal and public loss.

Krach, who lives and works in New York, began his process with a piece of mail art that he sent to the gallery. The piece itself was a postcard/screen print of What are you jealous of? a painting of Gauguin’s seized by the Bolsheviks from Sergei Shchuikinalong with the rest of his collection. This painting, deemed decadent, was put in storage for decades, cutting it off from an audience at home and from the west at large. In this case, the painting’s disappearance was due to politics and the tide of history ;now, with the new painting, the factors reflect a different set of economic and cultural causes. 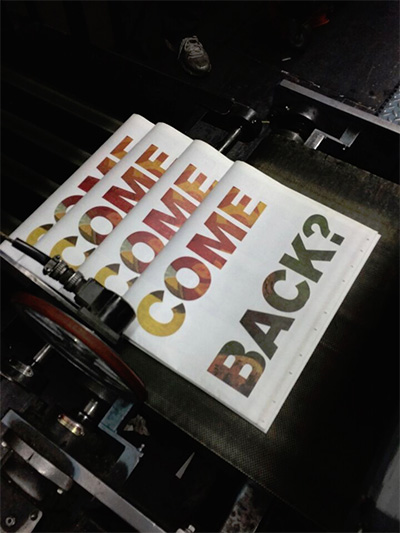 Aaron Krach, Why Are You Leaving? Where Are You Going? Will You Come Back? 2015. Ink on newsprint.

Krach uses the narrative of When Will You Marry? and the Tahitian women who are Gauguin’s subjects, to pose questions about loss, accessibility, and current trends surrounding the acquisition of Western cultural history, for sale to the highest bidder. Like this painting, there are countless contemporary examples in which important art has been on indefinite loan to a public museum, until the family decides to sell. The prices of art have soared to the point that wealthy patrons and museum endowments are no match for the new money pouring in from Asia and the Middle East. Krach suggests that we, as an audience, have a personal relationship with these works of art, now under siege and threat of severance. When Will You Marry? will be on view at the Beyeler Foundation in Switzerland, then the Reina Sophia in Madrid, and finally at the Philips Collection in Washington, D.C.,with the new owner taking possession in January of 2016.  Presumably from that point on, any engagement with the painting is speculative at best.

Krach’s extended title for the exhibition, boldly stenciled on the gallery wall in bright post-impressionist colors, reads as several questions that ask: “Why are you leaving? Where are you going? Will you come back?” These queries apply not only to the real painting but also, at the same time, to each viewer’s personal story, their lives, loves, family, and relationships. On another wall, several woodcuts in two tone colors, from a series of 15, refer to the painting by highlighting certain elements from the original. Some hold on to outlines of the two figures, others concentrate on silhouettes or the background. Again, the color scheme is in keeping with the radical departure Gauguin forged in his turn away from Impressionism. 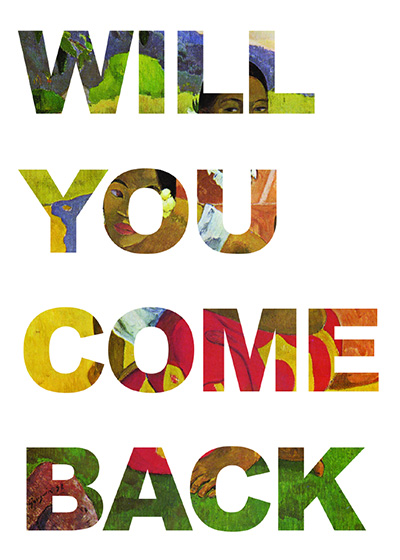 Aaron Krach, Why Are You Leaving? Where Are You Going? Will You Come Back? 2015 Woodcut on Paper.

In addition to the above, Krach had 1,000 eight-page newspapers fabricated; each unfolds to reveal details from the painting as well as representations of several books and publications that featured the painting on the cover, attesting to the painting’s importance and position as a well-known work by Gauguin, soon to be out of circulation. A timeline on the back-page starts in 1892, when the painting was created, and flows through art-historical events that conclude in 2016 with the words “Nafeafaaipoipo travels to a new and still unknown location.” This intense and emotional show might be read as a type of elegy, as well as a reminder about icons within the humanities that are worth preserving, or maybe simply as a warning to cherish people and things that are important to us while they are still around.

Aaron Krach
Will You Come Back?
The Reading Room
Through July 11