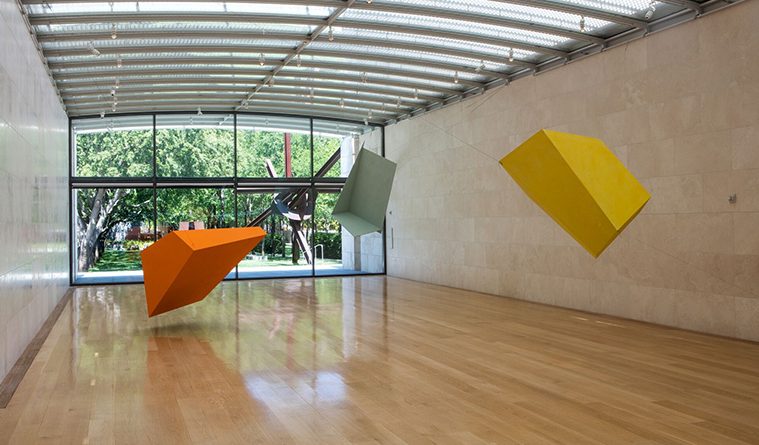 After All: Joel Shapiro at the Nasher 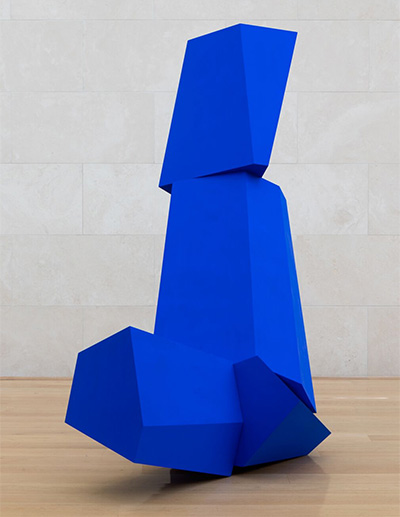 In celebration of the American sculptor Joel Shapiro, the Nasher Sculpture Center, which holds six examples of his work in their permanent collection, has unveiled a new piece specifically designed for the central gallery on the ground floor.  Definitely not a retrospective, this show unveils the latest stage in Shapiro’s aesthetic practice that spans five decades by exhibiting the commissioned installation along with five of permanent collection pieces and one borrowed from the collection of Nancy Nasher and David Haemisegger, the amazing 20 Elements, 2004-2005.  This multivalent sculpture of interconnected and multicolored geometric shapes may be familiar to patrons of NorthPark mall, it was chosen intentionally by the curators in order to greet visitors to the center and offer a direct context linking an example from earlier in Shapiro’s career to the new installation.  In addition, the exhibition includes several examples of his abstract ink drawings on paper, mostly from 2015, whose intimate and moody quality open the door to another dimension, that of Shapiro’s solitary private realm, in turn they augment and complicate how we view his sculptures.

Shapiro is mostly known for his works in bronze of linked cuboidal shapes, which read as abstract forms that play off of a likeness to the human figure.  Examples both large and moderate in scale can be found in the garden, as well as inside the space.  The curators have successfully arranged a constellation of pieces that indicate pivotal moments in Shapiro’s career so as to highlight various breakthroughs without resorting to narrative or chronology. Senior curator Jed Morse said the intention with the commission was to “investigate certain aspects of his practice in new and exciting ways” and to “move that body of work forward” in reference to installations Morse himself saw five years ago.  For those who have not kept up with Shapiro’s output, it may come as quite a surprise that his latest interest has been in raising objects off of the ground, first attaching pieces to gallery walls or the side of a building.  This naturally led to suspending forms from wires as if they hover on their own above the viewer.  For this exhibition Shapiro has created completely new forms in solid colors, most of which hang from wires attached throughout the gallery. 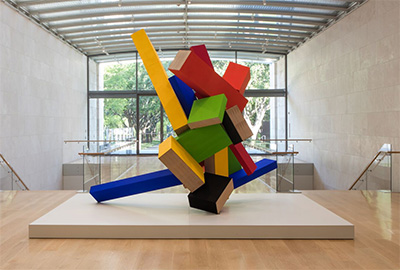 In preceding installations between 2010-11, Shapiro utilized suspended planks that varied in solid colors; they were almost experiments in the execution and mobilization of color in space.  As such, they were the precursor to the enriched embodiment present now at the Nasher.  Shapiro has stated that the “organization of form in space can be radical, and generate new experience” and that his intention is to “try and back away from how the floor dominates the organization of form.”  The description on the wall indicates that this site-specific installation includes five sculptures, and then proceeds to list the colors of each individual object (red, yellow, blue, orange, and green),and their construction in wood and casein.  What visitors experience are four unique objects that hover at alternate levels between the floor and ceiling, an orange shape just inches above ground is mesmerizing.  A bright blue polyhedron is the only one to sit on the floor, the largest and most complex of the figures; it balances on a single point that forms a kind of hinge for two outstretched sections.  This intricate form sets the visual tone for the balancing act performed by the others with wires that suspend them from all directions.

Some of the forms, specifically the blue one, are assembled with shapes similar to sculptures Shapiro has exhibited before.  As these are unique to this exhibition, the similarities are drawn from shapes that resembled homes, or dwellings, that refer to interaction with the social landscape.  In the past he has paired them with the better-known sculptures that resemble human forms, creating a visual dialog between the two, and suggestive of the lived relationship that occurs through social interaction.  By animating these symbolic forms, free of both the floor and the building, he says, “architecture is not organizing the piece” such that he’s aiming for the feeling of a “dream sequence.” Shapiro takes the installation into the realm of a metaphysical playground that bounces from dream states, hence the infinite possibilities of the unconscious, toward utopian spirituality as a reference to precedents observable in numerous examples within the 20th century avant-garde. This newest development in Shapiro’s long career seems as natural as it is compelling.  Decidedly not a minimalist, he continues to ponder objects and the space they occupy in quite modernist terms that land him somewhere between the historical avant-garde and the post war New York School.  He’s in good company.