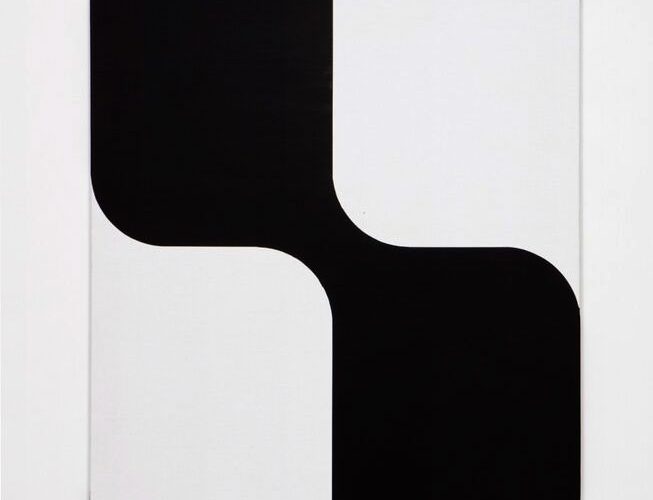 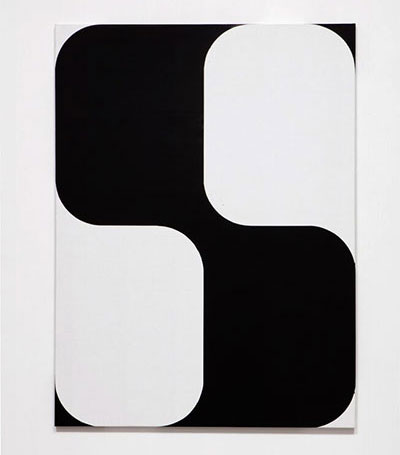 “There’s something about working serially that just lets you work through an idea better,” Francisco Moreno offers by way of explanation as we look at a newly completed series of “slates” on a late August afternoon.

Slates, which opens September 19 and will be on view at Erin Cluley Gallery through Oct. 17 will be the Texas-native and 2012 RISD graduate’s first solo show in Texas and for this, as it seems with much of Moreno’s practice, he has spared no effort.

There’s a lot riding on the show for Moreno, which includes a whopping 70 pieces (that’s 14 sets of five “slates” for those counting), a massive amount of work for any artist, especially one as young and untested as Moreno. But the “first solo show” designation is a bit of a misnomer; Moreno has been anything but lazy since graduation.

Earlier this year he was the lone Dallas-based visual artist asked to participate in the Dallas Symphony Orchestra’s inaugural SOLUNA: International Music & Arts Festival. His contribution came in the form of WCD (Washington Crossing the Delaware), a site-specific performance in which Moreno reinterpreted the iconic American painting with a particularly contemporary and personal slant; a Japanese car tricked out in American-muscle car style performed doughnuts in front of a massive, camouflaged canvas in a West Dallas warehouse, evoking associations with immigration, globalization and low versus high culture.

Over the past year Moreno has also been working on what he refers to as his “Debt Paintings.” Inspired by a comment his dad offered on the brilliance of TOM’s shoes “buy one-give one” approach to sales and marketing, Moreno is working through a series of 500 (big numbers are a trend in Moreno’s work it seems) very small paintings on wood slabs which he sells for $100 a piece, all proceeds going directly towards paying off his student debt. You do the math.

If you find the concept a little off-putting, you’re not alone, Moreno’s graduate school contemporaries advised against it, but the series, alongside the painting’s evolution into the much larger “slates” Moreno will be showing at Erin Cluley, should perhaps, in the light of the current economic reality, be considered more pragmatic than self-serving. 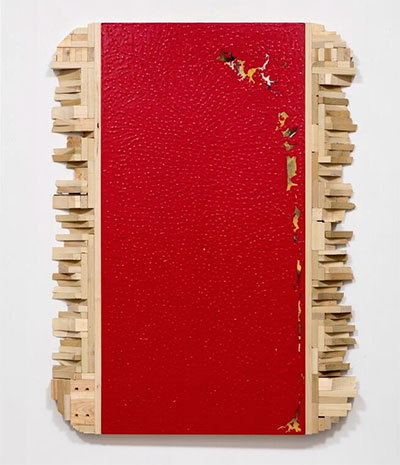 “I realized early on in high school, when I was playing in a rock band, that no-one gives a shit, but you can make them give a shit,” Moreno acknowledges.

That kind of just do it attitude is vital, especially for visual artists, in post-recession America; a country in which MFA-trained artists are increasing in number at the same time as their ability to profit on their work gradually declines.

Given the dreary art market for work by emerging artists, perhaps Moreno has acknowledged more than some of his contemporaries a reality most artists are forced to reckon with at some point in their career; desperate times call for desperate measures.

While many post-2008 art school graduates have resigned themselves to the reality that a full-time job doing something other than creating art is their fate (which is not to say they’ve given up their practice at all), Moreno is intent on at least making a go of it as an artist, going “all in” as he puts it, and Slates is shaping up to be a harbinger, or not, of success; a way of predicting the feasibility of making a living as an artist.

A few basic rules governed Moreno’s “slate” production, the works had to be created in sets of five. All of the pieces in the show are the same size, 48 X 36, with 5.5-inch radius curved corners. (On curved corners, “I think it happened when Apple patented the curved corner.”)

If one saw the work in a vacuum (if Moreno were not serving as a tour guide of sorts through his thinking), he would come across as a process-driven artist focused first and foremost on form and material.

And indeed art historical references abound in the series of paintings and “non-paintings” which compose Slates; from the formalism of Ellsworth Kelly in a series of hard-edge black and white minimal paintings to the more figurative work of Susan Rothenberg which Moreno cites as an influence for a series of paintings of unicorns.

He experiments with layering red and black paint in one series and even portraiture in a series featuring portraits of Kanye West.

Other pieces give away Moreno’s relative youth, a series he refers to as “Remnants” (which coincidentally is one of the most successful series), features works composed of various pieces of wood and tools he had laying around his studio (I didn’t ask but I’d venture a guess they were the last set of five Moreno created for the show.) 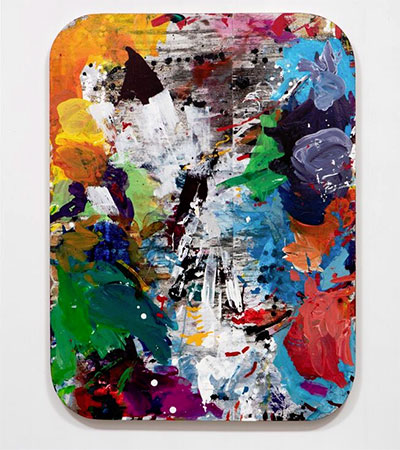 But while the “slates” are all process-based works in terms of creation, a better way to approach them may be to think of process less related to the formal elements of art production, and more in relation to it’s iterative and ideational components; what viewers will see when they walk into the no-doubt crowded walls of the Erin Cluley Gallery next week is an almost exhaustive look at an emerging artist’s evolution, curated by the artist himself; all of his influences, all of his experiments.

In Roger White’s The Contemporaries (a book in which Moreno makes a small appearance) White describes an artist’s studio as “a continuum in which the products of artistic work are completely present and alive.” The works, in other words, are more completely themselves in the studio, as opposed to their jarring removal from context to be placed instead on cold, white, context-less gallery walls.

“Making art is really about threading projects together over time,” Moreno proposes as at least a cursory explanation of his work, this was of course after he explained he could tell me how he created his work but as for why? He was still working that part out.

Slates should come across, in a way, like walking into Moreno’s studio; the ideas, people and tools which have influenced and inspired Moreno’s creation over the last several years all finding their place on the gallery walls, just as they would in the studio. The works he plans to show read like Moreno feeling his way through the painting and art-making process and it’s a rare, honest glimpse into the mind of a young artist; ideas which come from all over, almost none of which can be explained.