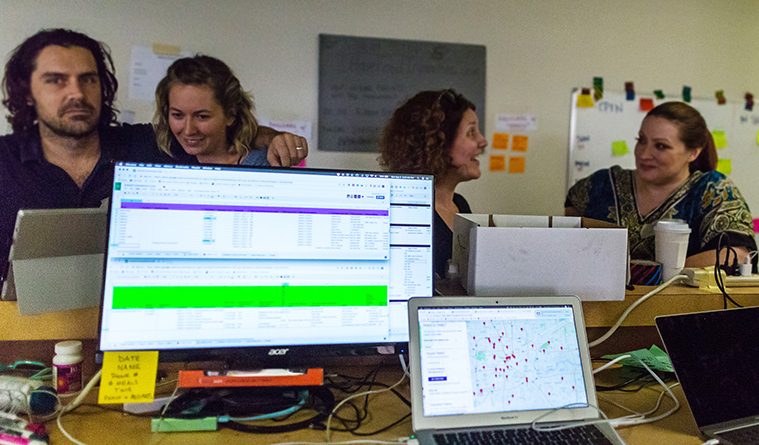 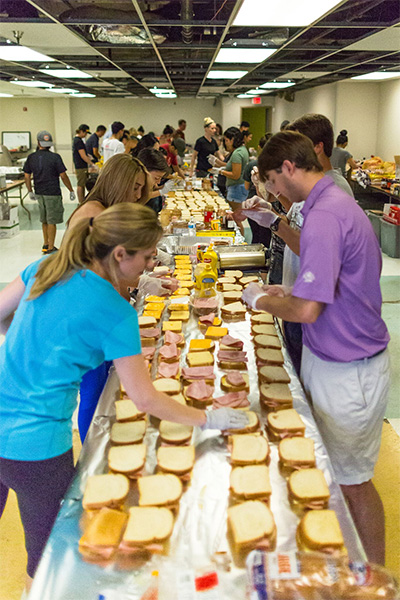 Volunteers making sandwiches at Midtown Kitchen Collective as part of the pop up organization I Have Food I Need Food. Photo by Emily Jaschke.

“Today, when I came to meet you, was the first day I didn’t have a pistol on me,” Paul Middendorf said recently, as he sat at Black Hole Coffee in Houston’s Montrose neighborhood—his first such outing since Hurricane Harvey brought catastrophic flooding to Southeast Texas. “It was really weird for me to get in my car and drive here knowing I didn’t have that.”

A fixture of the Houston art scene and executive director of Gallery Homeland, Middendorf is not the kind of guy you normally picture with a gun. He only started packing heat when he began getting pulled from boat rescues due to reports of looters with guns. “Everyone today was armed and it’s getting lawless,” Middendorf wrote at 4:23 p.m. Sept. 1 on his Facebook wall, which had for some days been one of the most adrenaline-pumping news feeds for Harvey watchers. “If you aren’t rescuing no more photo trips through these neighborhoods please.”

I grew up in Southeast Texas and had to canoe out of my house with my family when I was ten and Tropical Storm Claudette dumped a record-setting 43 inches of rain over Alvin in 24 hours. I’ve evacuated for some storms, hunkered down for others, been caught out and briefly stranded in a Clear Lake flash flood, and gone without power at home for several weeks while reporting on Hurricane Ike’s devastating impact on the Galveston art scene and its less serious toll on Houston’s, working alongside a Houston Chronicle team whose Ike coverage earned a Pulitzer nomination. But I have never seen anything like the story that unfolded during and after Harvey on my Facebook feed, which is disproportionately populated with what Middendorf calls “people we know—the people we see out and about” at gallery openings and performances. I’ve never seen “people we know” so swiftly, even starkly, transformed by a storm into heroic emergency first responders.

“The hurricane brought out the utter best in people as well as bringing out the utter worst in people,” Middendorf said. “You saw extreme spectrums on both ends. But the takeaway was extreme confidence for, not just our city, but our friends and our cohorts—that we could sustain if society collapsed, which is what we saw last week. Things were sustaining. People were getting food to people who needed it. Convoy supplies were being run. There were security operations that were happening. There were rescue operations that were happening.” 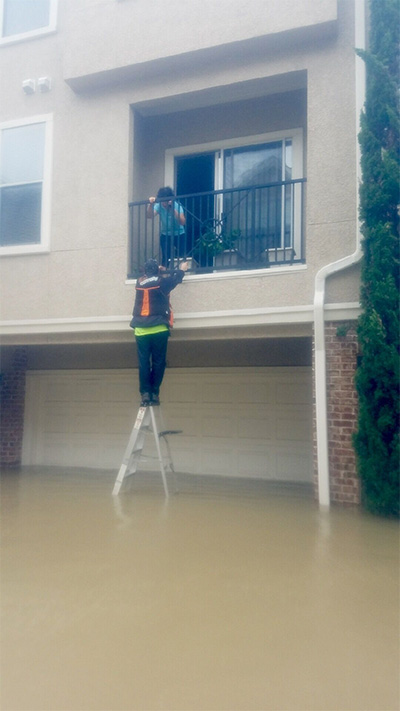 Paul Middendorf engaged in rescue of an elderly victim trapped in home due to rapidly rising water. Photo by Matthew Austin Williams.

Middendorf’s ad hoc role evolved from heading out to the Fifth Ward with artist Zac Moser on Moser’s canoe to running emergency dispatch on Zello, in between going out on boat rescues and armed convoys, and then again to coordinating efforts to get vaccines, antibiotics and other medical supplies to fellow volunteer first responders, all while still making supply runs to Port Arthur and elsewhere plus doing Irma-related Zello dispatch for Florida. (As was true for many spontaneous first responders, Harvey marked Middendorf’s introduction to the Zello app, and he quickly discovered that volunteers were dispatching from around the world.)

Asia Society Texas Center development director Jenni Rebecca Stephenson began helping connect boat rescuers with stranded flood victims after seeing Facebook photos Axelrad Beer Garden co-owner Adam Brackman had posted from his boat in the Meyerland area at the same time others were posting about friends in need. What started as a simple spreadsheet operation grew more sophisticated each day, culminating in a web portal where rescuers and people needing help could enter addresses and other critical details and assign ticket numbers for follow-up on Zello.

Food distribution efforts evolved similarly after arts advocate and volunteer Lauren Ferrante and others arrived with their first delivery to the George R. Brown Convention Center, only to discover “an incredible mass of food,” Ferrante said. “There was not a clear table in sight. They were having to put things in corners. It became clear that the restaurant community was doing this all over the city, and we all needed a better way to communicate.” Enter I Have Food I Need Food, a website launched by Jonathan Beitler, Amy Kavalewitz, Claudia Solis, and Matthew Wettergreen to connect commercial kitchens and caterers donating food with those in need.

On days when the flood currents were picking up, dispatchers wondered whether they should send boats into those areas. Stephenson repeatedly messaged a friend in the Houston Fire Department’s command center: “Are we supposed to be doing this?”

“They were so overwhelmed, he was like, ‘Yes. If you’ve got people who are competent in a boat and you can get them to the people that need help, yes; by all means, keep doing what you’re doing,’” Stephenson said. “I don’t know if it was an unofficial license, but it was certainly an acknowledgment that the need transcended the capabilities of the city officials to handle it.”

Middendorf said seeing people from the art community in unfamiliar roles as emergency responders reminded him of the 1998 sci-fi film Dark City, in which the residents of an artificial city awaken each day with new identities and no memories of their old ones.

“You would see people in these positions holding a rifle in front of a warehouse, or running convoy supply lines and barking orders, and you’re like, who the hell are you?” Middendorf said. “You’re a fundraiser; what are you doing? You’re a graphic designer. No one ever could have fathomed this amount of devastation, what was needed, or how they ended up in these roles.”