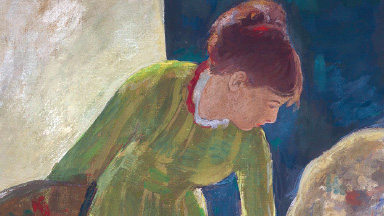 To mark its 50th anniversary, sick the Amon Carter Museum of American Art has acquired an important painting by Mary Cassatt, healing “Woman Standing, Holding a Fan,” created in 1878–79. The work is one of only two known canvases painted by the artist almost entirely in the medium of distemper and represents a key moment in her transformation into an impressionist.

“A great Cassatt painting has eluded us until now,” says Andrew Walker, director of the Fort Worth museum. “With her contemporaries John Singer Sargent and James McNeill Whistler, Cassatt was one of the most influential American artists living and working abroad in the 19th century; so naturally, we are thrilled to have one of her paintings in our collection. It is particularly rewarding that the work is unique in scale and breathtaking in its execution.”

Mary Cassatt (1844–1926) created the painting during a period of intense collaboration with French artist Edgar Degas (1834–1917) who invited her to exhibit with the impressionists at the group’s fourth exhibition in 1879. Cassatt was the only American in the group. In recognition of her contributions to the arts, France awarded her the Légion d’Honneur in 1904.

The Kimbell Art Museum is the sole American venue for “The Age of Impressionism: Great French Paintings from the Clark,” the first-ever international touring exhibition of the renowned collection of the Sterling and Francine Clark Art Institute in Williamstown, Massachusetts. The 73 paintings in the exhibition include 21 Renoirs and six Monets, along with works by Degas, Manet, Pissarro, Gauguin, Toulouse-Lautrec and Bonnard. Among them are some of the most familiar masterpieces of the Impressionist era. The show runs March 11–June 17, 2012 at the Fort Worth museum.

Barriers to attendance, identifying potential audiences, arts accessibility, and much more was discussed at The Arts Community Alliance (TACA) State of the Arts conversation held at the Nasher Sculpture Center on October 31. Zannie Giraud Voss, Chair and Professor, MA/MBA, Arts Management and Arts Entrepreneurship, Meadows School of the Arts and Cox School of Business at Southern Methodist University, moderated the discussion. Afterwards, the panel joined 140 attendees at the Crow Collection of Asian Art for lively, round-table discussions about what they heard, as well as to make suggestions for increasing attendance and participation in the performing arts in North Texas. Professor Voss said, “in Dallas right now, there’s a real sense of artistic vibrancy, and it’s because of all of the work that you create and that you cultivate here. It’s significant in that we have more performing arts organizations than ever before, which means there are more performances, more facilities, and more seats to fill. And that’s really exciting, except for the fact that all of this incredible growth is happening at a time of economic downturn, and shifts in audience attendance and participation, and so that creates somewhat of a friction level for us in figuring out how to face these challenges. We have people from other communities who are with us today so that we can also learn from them. Such as, what are the ideas we might adopt, steal, promote, and advance here in Dallas, given what we know of the peculiarities of our own environment.” Since its inception, TACA has distributed more than $19.3 million to emerging and established performing arts organizations with budgets as small as $44,000 to as large as $30 million.

Two landscape paintings by 18th Century French master Claude-Joseph Vernet have been reunited for the first time in more than 200 years at the dallas museum of Art. Commissioned in 1774 at the height of Vernet’s career by famous English collector Lord Lansdowne, the two large-scale paintings depict the complementary scenes of unruly rustic landscape and tranquil seaport. The duo, “A Mountain Landscape with an Approaching Storm” and “A Grand View of the Sea Shore,” hung together in the collector’s home, Lansdowne House, Berkeley Square, London, until his death, when the paintings were sold to separate private collections in 1806. On view through December 11, 2011, the Dallas presentation is the first opportunity, since the museum acquired “A Mountain Landscape” several decades ago, to bring the two paintings together to be viewed as Vernet originally intended.