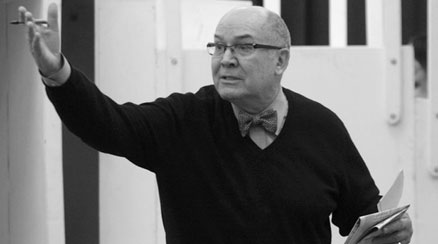 The Dallas Opera has announced that Broadway legend and Drama Desk and Tony Award-winning director, producer, playwright, and lyricist Jack O’Brien has been engaged to direct the company’s world premiere production of Great Scott, a new, full-length opera by acclaimed American composer Jake Heggie (Moby-Dick) and the Tony Award-winning playwright/librettist Terrence McNally (Master Class). The Dallas Opera commission is slated to open the Dallas Opera’s 2015-2016 Season Friday, October 30, 2015. O’Brien made his official debut with the Dallas Opera in 1968, when the company performed his lively adaptation of Jacques Offenbach’s Orpheus in the Underworld. His opera directorial debut occurred in 1972—here at the Dallas Opera—when he replaced stage director Ellis Rabb at the helm of Dido and Aeneas, featuring a cast of stars that included Tatiana Troyanos, Graciella Sciutti and Jon Vickers. He returned fifteen years later in 1987, with George Gershwin’s Porgy and Bess, the Dallas Opera’s first production of this twentieth-century masterpiece.

Dallas Theater Center announced today that The Andrew W. Mellon Foundation has awarded it a grant to support a three-year playwright residency.  Award-winning playwright and 2010 Meadows Prize recipient Will Power will be DTC’s new playwright in residence. As DTC’s playwright-in-residence, Power will be a full-time member of DTC’s artistic staff and will contribute greatly to DTC’s artistic policy.  His primary focus will be writing, but he will also spend a considerable amount of time teaching and developing new works.  In addition, Power will work with Kevin Moriarty, DTC artistic director, on a new strategic initiative to reach out to two under-represented neighborhoods in Dallas, one affluent and one made up of low income households, and help DTC to forge relationships that will welcome audiences from both neighborhoods into the theater. Power will be the first of several playwrights to fulfill multi-year residencies at DTC.  Beginning with Power, DTC will add a new playwright every one and a half years, creating a rotation that allows playwrights to work together and support each other’s work.

The nationally acclaimed Chihuly exhibition at The Dallas Arboretum has attracted hundreds of thousands of visitors from all over the world breaking records and contributing a significant economic impact to the city of Dallas since it opened May 5, according to a report issued by Arboretum management. In 2012, year-to-date attendance at the botanic garden grew by 42% with nearly 940,000 guests visiting the garden. Approximately 706,000 of those were during Chihuly (May 5 – December 31). Guests came from 71 countries around the world to visit the exhibition including China, New Zealand, Peru and Zimbabwe stated the report. The Arboretum currently has more than 35,000 members, which is an increase of over 9,000 since Chihuly opened on May 5.

The Dallas Design District welcomes a new gallery opening February 23 on Dragon Street, Laura Rathe Fine Art. Peering over a stunning panoramic view of the downtown Dallas skyline, LRFA is a unique and stellar 2-story gallery with 5,000 square feet featuring distinctive gallery spaces for the display of paintings, sculpture and mixed media. In addition to hosting artist exhibitions in conjunction with Dragon Streetʼs signature “DRAGON.open” art walks, LRFA will provide art consultation services to private and corporate collectors, as well as to designers and avid art enthusiasts. Laura Rathe, a graduate of Southern Methodist University, has been a professional fine art dealer for 15 years and currently owns and runs a contemporary gallery in Houston. The new gallery will be run by Janice Meyers, who has 27 years of experience in the Dallas art market and Courtney Feavel, who has 5 years experience in gallery and artist administration. The premiere exhibit is a group show highlighting abstract expressionist works by various artists, including Cecil Touchon, Tony Magar, Roi James, Meredith Pardue & Gary Beals.

The Bishop Arts District in Oak Cliff also has a new gallery space, Ginger Fox Gallery. West Texas native Ginger Fox is primarily a self-taught artist.  Fox’s journey into the arts began as a child when her neighbor dropped sculpting clay in front of her and asked if she wanted to play in the mud, and it continued with an endless array of projects and mediums. Fox transitioned into her fine art path full-time in 2006 with her first solo show at Wally Workman Fine Art in Austin.  Since then her work has been shown in established fine art galleries that include Perry Nicole Fine Art in Memphis, Portals Limited in Chicago, Seven-0-Seven in Santa Fe as well as the iconic Miller Gallery in Cincinnati which has been representing fine artists for over 50 years.  The gallery will also represent other local artists and styles.

The Meadows Museum announces that Stephen Lapthisophon is the recipient of the 2012 Moss/Chumley Artist Award.  The award is given annually to an outstanding North Texas artist who has exhibited professionally for at least ten years and has a proven track record as a community advocate for the visual arts.  Lapthisophon received the award on December 5, 2012 at an evening reception at the Meadows Museum. This year’s recipient of the Moss/Chumley Award is a multimedia artist whose work defies classification; as a whole, he addresses questions of language, history, and cultural memory. Many of his projects are site-specific installations that address the sensory world. His sensory preoccupation is in part due to his own experience with an optic nerve disorder in 1994, which left him legally blind. Recent solo exhibitions include “Quotation as Gesture” at the Modern Art Museum of Fort Worth in 2009, “Spelling Lesson” at Conduit Gallery in 2011 and “The Construction of a National Identity” at Hyde Park Art Center in Chicago. He is represented at Conduit Gallery in Dallas.

Governor Susana Martinez has recently announced the appointment of Taos painter David Hinske to a three year term to the New Mexico Arts Commission. Hinske is represented locally by Mary Tomas Gallery in the Dallas Design District. The Commission is the advisory board for New Mexico Arts, a division of the Department of Cultural Affairs. It’s mission is to stimulate opportunities for artists, arts organizations, and other groups for activities or projects to provide artistic or cultural services to the state, to maintain and encourage artistic excellence, and to promote awareness of and access to the arts for all of the people of New Mexico.

The Sammons Center for the Arts plans to present their Spring series of Cabaret performances as an adjunct to their successful Sammons Jazz program.  The concerts are New York-style cabaret with a singer accompanied by a pianist, and will feature standard cabaret repertoire including music from the Great American Songbook, Broadway tunes, torch songs and vocal standards.  Performances will be held in the intimate setting of Kurth Recital Hall at the Sammons Center for the Arts to a limited audience. Tickets are now on sale.

The Dallas Museum of Art has announced the appointment of Sabiha Al Khemir, the founding director of the Museum of Islamic Art in Doha, Qatar, as the Museum’s first Senior Advisor of Islamic Art. The appointment, effective immediately, is for a three-year term during which Dr. Al Khemir will support Anderson and senior staff in building partnerships with art institutions across the globe. Al Khemir, an internationally known authority on Islamic art from the 7th century through the present, will work with the DMA to enhance the presence of Islamic art within its exhibitions and collections and promote the exchange of Islamic works between the Museum and other participating institutions. A writer, artist, and expert in Islamic art whose work is concerned with bridging cultural divides and spurring international dialogue, Al Khemir joined the Museum of Islamic Art in Doha, Qatar, as its Chief Curator in 2003. She later served as its first director from 2006 to 2008.