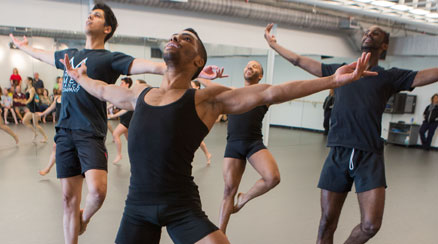 Josef Helfenstein, director of the Menil Collection, announced the appointment of Michael Van Valkenburgh Associates (MVVA) to enhance and expand the landscape design of the institution’s 30-acre campus in the heart of Houston. The appointment signals the beginning of implementation of the Menil’s master plan for its urban “neighborhood of art,” as the enclave of museum buildings, green spaces, and bungalows has been called.

The Museum of Fine Arts, Houston’s Chairman of the Board of Trustees, Cornelia Cullen Long, today announced the Board’s unanimous selection of Richard D. Kinder as her successor. The vote took place at the Annual Meeting of the Board.

Houston Grand Opera announced a gift from the Robert and Janice McNair Foundation in support of the organization’s commitment to develop a new series of holiday-themed operas. This gift will help Houston Grand Opera create new works based on beloved classics, with the first commission programmed for 2014 and continuing through 2017.

The Alley Theatre added Tony Award-Winning Best Play Vanya and Sonia and Masha and Spike to their 2013-2014 Season.

Lacy Johnson is the new Director of Academic Initiatives at University of Houston Cynthia Woods Mitchell Center for the Arts.

The Joanna has closed. Co-Founder Cody Ledvina will be opening a new gallery, The Brandon, in the Domy bookstore.

After raising $700,000 over seven years, `The Houston Metropolitan Dance Center on 2808 Caroline Street  opened for classes and rehearsal for the The Houston Met Dance Company, a prominent contemporary troupe known for performing works by such nationally recognized choreographers as Larry Keigwin, Peter Chu and Jane Weiner. The center features 11,000 square feet, four studios and ample parking. Keith Gendel of HarryGrendal Architects designed the space owned by Larry Margolis and Ian Rosenberg of Infill Planning and Development, while Balfour Beatty assisted in the construction.