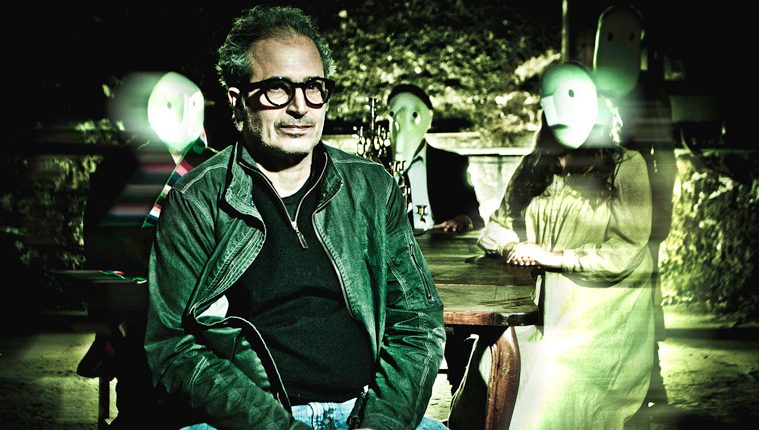 At Play with Dead White Zombies

The Dallas-based group of malcontent theatre, performance, visual, sound, and installation artists, collectively known as The Dead White Zombies, are taking experimental theatre to an all-new level. Thomas Riccio, an award-winning playwright, director, and scholar of indigenous and ritual created the group’s newest play (w)hole, a karmic love story, traversing lifetimes simultaneously — offering to the audience choices in how they want to experience or participate.

Divided up into different spaces or sets, requiring the audience to choose between them — the common space where you may encounter other actors open to engagement, a purgatory discovered in a maze inhabited by dancers (Danielle Georgiou and Amrita Ranchod), Catherine the Great speaking in young voice (played by Justin Locklear), a ritual space where healing takes place, and even an intuitive ready to do a live reading with you.

This world premier play takes on an Ayurveda world view presenting us with a more global way of thinking. Riccio is a prolific teacher, working with indigenous and modern cultures whose work provides healing and understanding through performance. The fact that Riccio has the ability to work with indengious tribes as well as modernized cultures — delicately balancing the needs of each community — provides insight into his abstract thought processes.

Conceptualist Mona Kasra, remarked, “The thing about Riccio is he has this nonlinear surreal mind; the beauty of working with him is he leaves you to experiment and do your own process.” The resulting collaboration produced this compelling video work in the back of the performance space in what is called “The Ritual Room.” Projected on a large wall the video works appear like beautiful living paintings working to deepen the emotion of not only the moment, but the space.

The performance collective is evolving and asking us as an audience to evolve with them, a journey that the performers also experience along the way. Ben Muir, DWZ member, stated, “Our investment in the whole collective is being present. The one thing I like about Tom specifically is that every time I come to rehearsal he walks me through this warehouse and shows me what’s happened since the last time I was here. I just feel part of it.”

On a beautiful Saturday afternoon, arts writer Rachel Van Horn made her way across the new Margaret Hunt Hill Bridge into West Dallas to spend an afternoon with Riccio to discuss his art practice, performance, and purpose.

A+C: (w)hole is a love story about star crossed lovers. Is this a story from your life or the iterations of your life?

THOMAS RICCIO: Maybe…I think it’s of everyone’s life. It’s personal because of the extremity of some of my travels and some of my experiences with spirit people informed it; healing ceremonies, crossing boundaries between one reality or another. It’s kind of — in a Western format — we don’t share in a unified way any one cosmology. We all have a spiritual sense whether you are secular or atheist or Christian or Buddhist, we all have that same sense. I’m addressing some of that in (w)hole.

A+C: Where did you draw inspiration for this play?

TR:  Essentially, time is a construct, and reality — as we perceive it — is a construct. We have constructed it in a very constricted way in the West; in this way, it limits our range. I think intuitively our culture is expanding beyond it to a higher conscientiousness and we’re more sensitized to these greater realities. This work is in response to that.

A+C: (w)hole doesn’t seem to follow any traditional stage direction. It makes for an interactive experience for the observer; essentially turning the traditional dormant viewer active.

TR:  That’s why I don’t like the stage, because with the stage in traditional theater, I find it is very confining. It constrains things and basically for me it’s a metaphor for how in the West we confine ideas into a link space. We make dormant the body — the audience; the dormant body watching the illuminated mind. For me, that’s a false premise; it’s old and it’s actually regressive. Whereas, it’s not only the content, it’s also the form and the gesture of its presentation. That’s why I like this type of presentation. The presentation is as much a part of the content and expression as is the content. The traditional text and actions — I see it in a much more global way.

A+C: Tell me more about that in terms of how this works.

TR:  This should be a place of “revelation;” that’s the indigenous ritual inspiration for this work. In that, ritual is an unveiling to a pure or more authentic reality. It’s a way of touching the flames that are eternal. In my opinion, that’s the origin of theater and performance. We have become so bound or layered in the artifice that we kind of lost contact with that. Our reality is becoming increasingly electronically virtualized, digitized, — that we’re losing our sense of humanity and that human essence is what we have. I am hoping with DWZ we explore and expand beyond that to invigorate — for this age — a new way of performing and understanding performance. In a way I am just trying to remind us that we are human, that we have all these peculiar habits and we can process in a way that is far more sophisticated than our cultural heritage has enabled us.

A+C: The audience plays a role throughout the play. How does this work?

TR:  A lot of times in our culture we acquiesce and formulate our lives in accordance to the rhythms and structures of technology. I like the randomness and I like the emotive of the actors. They actually set patterns of how they will move through the space during the performance, but if something else comes along that is of interest to them and they feel available at that moment they’re allowed to move as they will. In a sense, that’s what I want the audience to do. The audience is basically free to move at will. Some people may come in and be like, “where do I go?” Well, that’s your problem. You should ask yourself philosophically in life, where do I go and how will I do it?

In a way that’s an awakening. It’s like you need to go beyond — talk about change — you need to go beyond, “I go to a play, I go to a movie, and this is what I should do and how I should behave;” this is the convention. This is how I’m formatted into it — into life. I am a franchise like McDonalds; this is what I expect, what I should be fed. It’s like no, this is the space, these are the offerings, and they will change with what’s happening at that moment. No two performance nights will be the same. You will always alter, because the people will change. They will be right next to each other. You sit at the bench and someone next to you may be a performer.

A+C:  (w)hole works with memory and your art installation at Centraltrak, “Not So Indifferent,” was a study on memory. Is this important to your practice?

TR:  I mean, we are sitting here now, everything else is memory. The great portion of who we are is memory. I am not a sentimentalist and I don’t wallow in that. I try to off-set the sentiment with something harder and not to be drawn into it, because it is so easy and it’s kind of a cheap shot and then you’re missing the point.

In a sense, the idea is all the souls come to — in an Ayurveda world view — one place and decide what has happened in their previous lives and what they learned and what they need to learn before they’re reborn. In a sense this whole space, the whole space of the performance, are these souls coming in but the thing is they come in from different angles and they are working out what they need to do next. Some of them are working from one period and others are working from another. Then others are flashing into another period and another. Essentially that’s what we do, we flash. If someone says something, they may flash something that happened to you when you were seven and you were in one part of your life. Or maybe another flash is an idealization of how we picture ourselves; idealize ourselves which never really existed. It’s all construct, so you have all these things and it can happen in a period of like 30 seconds — something real and traumatizing and something real, very abstract, and idealizing. Time and space is basically collapse. It doesn’t matter. I know vaguely I was about this age but you know time and space; I mean I don’t even know what happened last week or what happened Monday or Tuesday. It’s all kind of like, was it at 11 o’clock in the morning or was it…or the whole pot of feelings I had last week. It’s like a pot, it’s not organized.

TR:  It’s complicated if you try to sort it out. I mean, I don’t try to sort it out, it just is. These elders in Alaska would say, “accept and don’t expect.” So you just accept it and that is just when something happens. It’s like I am going to accept that, that’s good, maybe there’s something there. Then you are open. In a way the world is always talking. We think only humans talk or only our conscience rational mind is what we should listen to and so we are kind of denying a whole vocabulary or dialogue with larger realities. This is the possibility (opens arms) and we are only listening to this small band and it’s like, why? So, if I go outside and the sun is out, the sun is talking to me. It’s like it made me feel good, but if I am only looking for certain things I won’t even see it.

A+C: I love that about your work. You aren’t just working with the visible space, but the imagined space in our minds.

TR:  Yeah, it’s astral plane or cosmic plane or whatever plane you want to call it. Or imagined space — maybe this is my total hallucination.

A+C: Well this could all be a hallucination, that’s what I think sometimes…I find your work is very important. You bring out the authenticity in the viewer, audience, or participator. I believe this can only be done when you are encountering it in another. Do you find that true?

TR:  Absolutely. That’s why I have to build it that way. It’s like scratch cooking, you know what I mean? You can’t do that cake mix from a box. It’s just not the same. You can fool yourself but it’s just not the same. We are going from a market economy to a market culture. That for me is really frightening. The fact that we are so mediated by marketing and our identity is increasingly controlled by what’s marketed to us, identifying what we need. So, we are kind of losing our sense of self. If the work I do can remind you, and to maybe step out of that, then fine.

A+C: If you could think of the best outcome of audiences coming to (w)hole, what would that be?

TR:  To invigorate. I think there are people like us that want something different. They want to explore beyond the norm and the confines. In the few shows we have done, we have actually begun to have a following. We don’t do a lot of advertising. This has mostly developed by word of mouth. It’s what I like to work for. For me, I put my heart and soul into it. Good work is its own reward. That’s it right there. I just want to share.