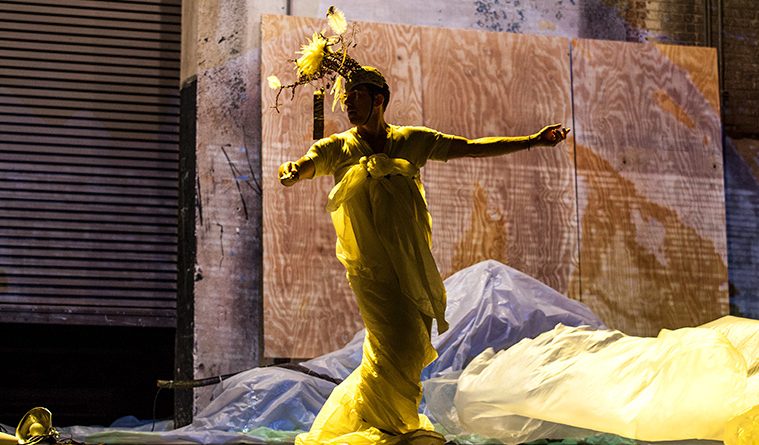 David Neumann in I Understand Everything Better, which will be performed as part of the Fusebox festival on April 13-15 at The Rollins Theater at The Long Center for the Performing Arts.
Photo by Baranova. 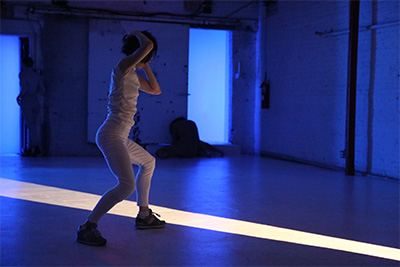 Beth Gill performs Catacomb, April 13-15 at the Off Center. Photo courtesy of the artist.

Fusebox, Austin’s contemporary, cross-disciplinary visual and performing arts festival, and all round benevolent force in the struggle to keep Austin weird, consolidated its offerings in 2016, going from a 10 or 12 day schedule to a five-day festival lineup. As a result, something other than the usual wildness happened. A temporary, yet intense, local and international artist and audience community formed.

Like Fusebox’s earlier decision to make all performances free to attend, the compressed schedule was something of an experiment. The change created a “density” to the festival, according to Fusebox’s executive and artistic director, Ron Berry. Narrowing the time-frame, but not the number of art installations and performances offered, encouraged more people outside of Austin to attend, because they could see more in a limited time period, and it also seemed to create a new energy for local audiences.

“It does burn a little more brightly, and you see more people at different things. It does create a lovely and temporary community,” explains Berry, who notes the 2016 Fest brought in more attendees from outside of Austin and Texas, including more artists and colleagues who work on performing art festivals around the world. So it was an easy decision to keep that compressed schedule for 2017. After a pre-festival Festival Eve benefit and ticketed bacchanal on April 11, the official Festival runs from Wednesday, April 11 to Sunday, April 16, with 103 events at 19 venues and locations around the city.

“We’re interested in what that density does. Does it create a different kind of temporary community?” ponders Berry. “Does it affect how you experience the different works of art? Are you able to make different connections?”

Community has always been a core value of Fusebox, so creating even a temporary audience and artist community within the larger Austin innovative-art-loving populace was certainly an added bonus last year. 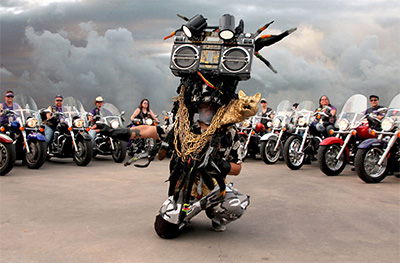 In fact, when programming for Fusebox every year, it’s to the local community the organizers look first. “We’re steeped in this community and what’s happening here artistically, culturally, politically, socially,” explains Berry. “That’s a grounding place for us but we’re also simultaneously engaged in a larger national and international conversation.”

The Fusebox Festival does not usually rely on an overarching common theme or explored issue in any given year, but Berry does find that a few thematic threads emerge from those local, national and international conversations.

Describing the programming process, Berry says they begin with a “handful of projects in Austin, in the country and around the world that particularly captured out attention and imagination.”

To those core projects, they then add other artists and performances, which continue those conversations and perhaps allow audiences to find connections. This year’s festival brings a project Fusebox co-commissioned with Ballroom Marfa. Pancho Villa From A Safe Distance, an experimental chamber opera about the life and death of Pancho Villa, also explores the mythology that has grown around the legend and his importance to Mexican, American and Mexican-American culture. The opera was composed by local legend Graham Reynolds, with a libretto by Mexico City-based theater collective Lagartijas Tiradas Al Sol; the Rude Mech’s Shawn Sides will direct.

“It was particularly exciting to be championing a project that was looking at our shared history along the border and creating something together from both sides,” says Berry. And from Pancho Villa one of the main thematic threads emerged for this 2017 Festival: borders.

“We really like that this was a featured project in our festival,” says Berry. “Around it we wanted to include a handful of other projects featuring artists from Mexico, other artists from Latin and South American and issues around the border.” 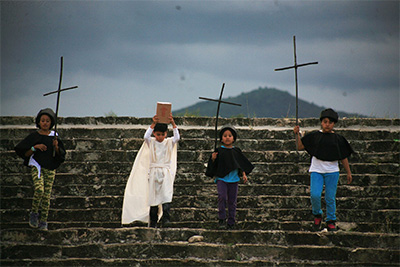 Another thematic thread in this year’s festival comes from an artistic trend and organizing principle that Berry has seen in art both locally and in his travels searching for new programming.

“There are several other projects in the festival that are mining and looking at ritual. A lot of artists have been returning to ritual as a tool, particularly in performance,” explains Berry and notes that they are returning to the concept of ritual as “a way to connect to community in a more powerful way.”

One performance piece in particular, the world premiere, BOOM! BOOM! WHAMMM! SWOOSH!, will act as a kind of bridge between the border-themed and ritual performances. Artist Irvin Morazan will orchestrate a sound composition with an all-Latina Harley Davidson motorcycle gang using their bikes as instruments. Originally from El Salvador, Morazan, who comes from a sculpture background, will design a ritual headdress reflecting both his Mayan culture and the technology- driven contemporary world.

“The project speaks to some of the issues that Pancho Villa speaks to in looking at immigration and racism. It’s a loud, powerful shout down of those things,” says Berry, adding that Morazan is known for creating “large public rituals.”

Another work that embraces elements of ritual is Jim Findley’s Vine of the Dead, 11 Ritual Gestures, which Berry describes as “a kind of a performance, kind of an instillation, kind of a seance.”

Dallas-based singer and performer Francine Thirteen, who Berry says “kind of coined the phrase ritual pop,” returns to Fusebox for a late-night show of choreography, theater, ritual, music, and projections. All three projects have “interesting expressions of ritual,” but each artist uses rituals in very different ways.

Of the remaining festival programming, Berry notes, “That’s another thread: here’s some other stuff you should just look at because they’re awesome.” In this category, he points out David Neumann’s multidisciplinary dance-based performance, I Understand Everything Better, which was scheduled for 2016 but because of a last minute venue issue was postponed. Berry knew they had to try again with such “a thrilling, spectacular piece that’s playful and funny but haunting and moving.”

He would also include the return to Fusebox of “one of the most exciting choreographers in New York,” the Bessie award-winning Beth Gill with her relatively new work, Catacomb, as another thread in the just awesome tapestry.

Through all 103 events and performances, Berry wants to maintain that sense of community, a community that might form quickly, only to dissolve five days later, but which might continue to resonate with the individual members long after the festival closes. To accomplish this artist/audience community they continue to experiment with new ideas and events. One highlight will be the Riding With. . . project, as five performers shuttle festival-goers around and record the conversations. Part performance, part “attempt to capture these spontaneous conversations in-between events as part of the festival,” Riding With. . . will also help to round out the Fusebox archives with more than just photos and videos.

As part of Fusebox’s ongoing thinkEast commitment to equitable development in East Austin, this year they’ll offer a prototype community cafe in the neighborhood, as they delve into “issues around food, food access and community health.”

And of course, it’s hard to develop community without a communal hangout, especially at a festival with 19 scattered venues and performance spaces, so this year, they’re branding a new Fusebox late night hub, Al Volta’s Midnight Bar. Al Volta’s will feature a different menu and performances every night, and they want it to become a gathering place, not just for fest-goers but for whole city. Though the pop-up bar will disappear after five nights, Berry hopes it will help to “dissolve those lines between audience and art.”

After 13 years in existence, Berry believes Fusebox retains its uniqueness among experimental performance art festivals around the country because of the community that grew it.

“One of the things I love about living in Austin is that it’s a friendly community. It’s very collaborative; it’s kind of laid-back and a little bit DIY, and all of those qualities are front and center with our festival.