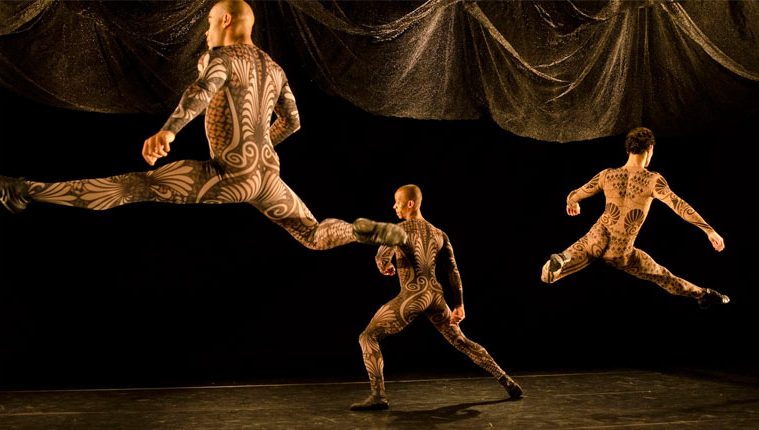 Grupo Corpo at Society for the Performing Arts

Pulsing rhythms, a seamless, fluid movement language, and mesmerizing choreography that spreads out horizontally across the stage evoking the sea and the mountains characterize Grupo Corpo (Group Body), Brazil’s leading contemporary dance troupe. The company arrives in Houston for the very first time for two performances, Thursday, March 14, and Friday, March 15, at 8 p.m. in the Wortham Center’s Cullen Theater, presented by Society for the Performing Arts.

Grupo Corpo was founded in 1975 in the city of Belo Horizonte. It’s very much a family affair in that Pederneiras family – brothers Paulo, Pedro, Rodrigo, Jose Luis and sister Miriam—came together to create the company’s identity. Today, the company is run by brothers Rodrigo, choreographer and former Grupo Corpo dancer, and Paulo, lighting and set designer.

The program includes Imã (which means magnet in Portuguese), set to a jazzy score by the Brazilian trio +2, and Sem Mim (Without Me), set to an original score composed by Carlos Nunez, a traditional Galician bagpipe player, and José Miguel Wisnik. The score is based on the 13th century Galician-Portuguese song cycle Sea of Vigo by Martin Codax.

Both pieces show off Grupo Corpo’s signature style that includes an extraordinary lightness in movement and an organic choreographic structure that builds gradually into eye-popping configuations.

Dance Source Houston: Since the company is new to Houston, what do we need to know about Grupo Corpo?

Rodrigo Pederneiras: Some things are very important, for example, Grupo Corpo is a company that works as a team. Our creative group is formed by Paulo Pederneiras, Freusa Zechmeister and myself. We have worked together for more than 30 years, which means a total confidence, artistic and personal, in each other’s work. Since the 1990s, we’ve been searching for a Brazilian identity, and I believe that this Brazilian way of live is deeply reflected in our work.

DSH: How would you describe Grupo Corpo’s movement style?

RP: We did a lot of research in popular and folkloric dances for many years. From that, we developed a unique language filled with Brazilian characteristics and movements.

DSH: The dancers looks so versatile. I see marvelous petite allegro work yet they are so free in their upper bodies. How do your dancers train?

RP: All the dancers have a strong and clean classic ballet technique before joining Grupo Corpo. Their daily training is a classical ballet class.

DSH: What kind of dancers do you look for?

RP: The ideal dancer a classic ballet technique foundation, a good ear for music, and has to be charismatic. The dancer’s movements have to seem as a constant wave, with out any interruptions.

DSH: How would we know just from watching that Grupo Corpo is from Brazil?

RP: To be honest, I don’t know if it would be crystal clear to someone who watches Grupo Corpo for the first time that the company is Brazilian. However, one definitely will say that it is a Latino American company for the sensuality and untied movements, very characteristic from this region.

DSH: Can you tell us a bit about contemporary dance in Brazil?

RP: There are various contemporary companies that are not official, but very much active. Different styles and the search for a new way can be seen today in Brazil. Grupo Corpo, as an older company, encourages and provides support for the new companies and new choreographers.

DSH: Are there other contemporary choreographers that have influenced your work?

RP: Argentinian Oscar Araiz is the only choreographer that really had a big influence on my work. He was my first and great master.

DSH: Let’s talk about the first piece Imã. How does the idea of magnets play out in the dance?

RP: It can be seen by the constant movement of attraction and repulsion during the dance, always referring to the principle of the magnets.

DSH: Carlos Nunez and José Miguel Wisnik’s score for Sem Mim has some rather interesiing origins.  How did you come across Martin Codax’s songbook?

RP: This songbook was presented to me by one of the composers, José Miguel Wisnik, who is a great partner. When I first heard the music, I suggested that we develop a work based on those seven songs and Sem Mim became our 4th partnership.

DSH: Can you talk about the creative dynamic you have developed with your brother, Paulo, who designs the sets and lights.

RP: We have worked together for more than 30 years, and now, the ideas flow easily between us. My choreographic work always starts with the music. Since 1992, soundtracks have been especially composed for Grupo Corpo. I always have the opportunity to work together with the composers and musicians. When the soundtrack is ready, I start to choreograph. When music and choreography are finished, Paulo gives the final touches, designing lights and sets.

Society for the Performing Arts presents Grupo Corpo on Thursday, March 14, and Friday, March 15, at 8 p.m. in the Wortham Center’s Cullen Theater.