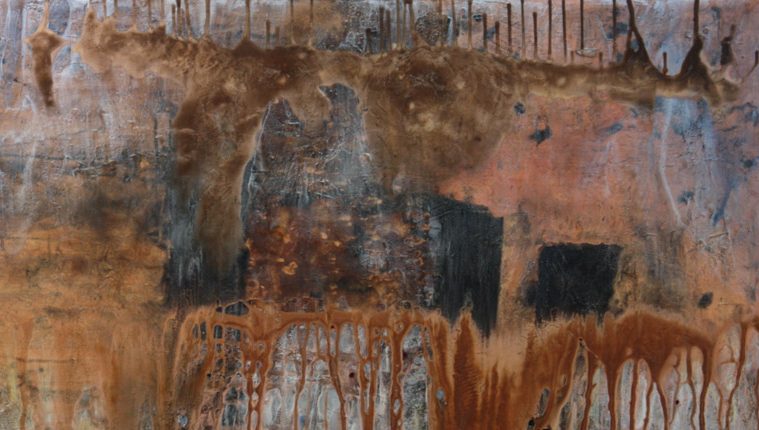 Enter GVG Contemporary in Santa Fe’s historic Canyon Road arts district, help where ornamental beams called vigas line the ceiling, order and the soft glow of light from a handmade paper lampshade from a lamp made from a tree sapling illuminates the soft, store gently undulating abstractions of Mary Tomás. Her paintings pair nicely with the contemporary designs of painter and furniture maker Ernst Gruler who designed the lamp, and contrasts equally well with Blair Vaughn-Gruler’s mixed media paintings, some of which exhibit a reductive use of line to convey an idea of representationalism.

Tomás, owner of Mary Tomás Studio Gallery in Dallas, joined Blair Vaughn-Gruler’s and Ernst Gruler’s repertoire of artists at GVG, their gallery, only recently after a chance meeting in Dallas. This led to an opportunity for all three artists to introduce their work to new communities and new markets. In August Gruler and Vaughn-Gruler opened Southwest Abstraction, featuring the work of Tomás. The Dallas gallerist has responded in kind, featuring Gruler and Vaughn-Gruler, along with artists David Hinske, Carolyn Caldwell, and Robin Herndon, in the exhibition Abstraction, Form and Function that opens in Dallas on September 8. Gruler’s and Vaughn-Gruler’s work will remain on view at Mary Tomás Studio Gallery for the remainder of the year and, likewise, Tomás’ work will remain on view in Santa Fe.

Ernst Gruler and Blair Vaughn-Gruler met with Michael Abatemarco at their gallery to discuss with A+C the nature of the collaboration.

A+C: How did this collaboration develop? Were you already familiar with Mary’s work when you invited her to show at GVG?

VAUGHN-GRULER: Ernst and I were making a delivery in January from our gallery to Fort Worth. While we were down there we wanted to check out the art district in Dallas and had Dragon Street recommended to us. While we were going gallery hopping on Dragon Street we stopped in Mary’s gallery. A little synergy happened and we hit it off. Mary had the idea and said she’d like to show our work and we liked her work as well. We only met her in person for half an hour but we’ve been corresponding a lot over the last six months. It will be fun to be with her a little bit and see what other brainstorming might arise.

A+C:  Do you show similar work in your respective galleries?

VAUGHN-GRULER: They’re both contemporary but they’re very different spaces. Her gallery is a big space with high ceilings. None of this viga stuff.

A+C:  Is this something new for GVG? This kind of collaboration between galleries from different states?

GRULER:  This is a first for us, bringing another gallery person into the space. It’s quite a different way for us to show our work but I think it will look good.

A+C: Mary’s work fits well here but I understand the two exhibitions, Southwest Abstraction and Abstraction, Form and Function are not concurrent.

VAUGHN-GRULER: We’ll just miss each other. This one runs through the end of August and ours opens on September 8 in Dallas. It’s a nice benefit that Dallas and Santa Fe have opposite high seasons.

A+C:  I see collaborations between galleries and other art venues happening more and more. I don’t know if the economy has played a part in that but do you see this kind of partnership happening again for GVG?

GRULER: I’m hoping so. We’ve generated a fair amount of interest in Mary’s work already. I’d like to see it become a continuing kind of thing.

A+C:  Blair, you’re including new pieces that incorporate wood shingles mounted on canvas and then painted but the aesthetic is very minimalist. Your older work has more representational imagery but is also minimalist. Has that always been your style as a painter?

VAUGHN-GRULER: No. I got my MFA in 2010. Going through that process, I had to redefine what I was doing and why I was doing it and my work has become more minimal during that time. Less abstract expressionist and more minimalist.

A+C:  Ernst, you’re showing your furniture designs as well as your paintings at Mary Tomás. Have you always worked in both mediums?

GRULER:  I’ve been painting for quite some time. Furniture making goes ahead of that. I’ve been designing and building contemporary furniture for over 20 years now. I have a master’s with a furniture design concentration and before that I got a BFA with a furniture design concentration. I got the degrees from Northern Michigan University and that’s where I met Blair. We got together on an art collaboration. It’s been over 20 years now and we’re still collaborating.

A+C:  What was the nature of your work together?

VAUGHN-GRULER: In those days he was building dimensional sculptures and I was painting them. Now he does his own painting.

A+C:  Did Blair influence you in that direction?

GRULER:  Oh, yeah. She still does.

VAUGHN-GRULER: Let’s just say that he has to walk through my studio to get to his studio.