Catching up with North Texas Theater: A Conversation with Lindsey Wilson 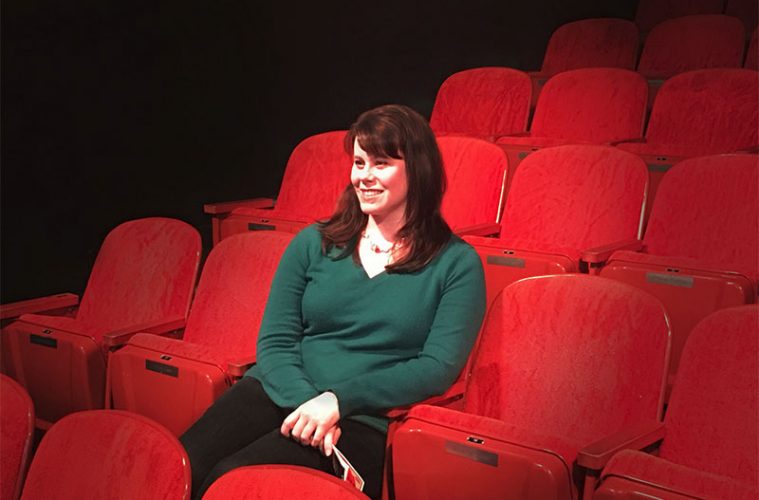 Lindsey Wilson is hands down one of the most prolific theater writers in Texas.  I have been lucky to share Wilson with CultureMap over the past nine years at ACTX. Since I am forever bothering her about what’s going on in the NTX theater scene, I thought it would be fun to make some of our chit chat public. Enjoy our conversation.

If you had to describe the NTX theater scene vibe in 100 words, what would you say? (And I will count those words!)

Versatility is at the core of the NTX theater scene. Whether you want challenging new works or familiar classics, there is guaranteed to be a theater producing what you’re seeking. The sheer volume of theaters here also means it’s possible to continually be in discovery mode. One of my favorite things to do is take someone as my plus-one to a theater they’d never been to before — I keep forgetting that just because I’ve frequented nearly all of them, not everyone has been so lucky! 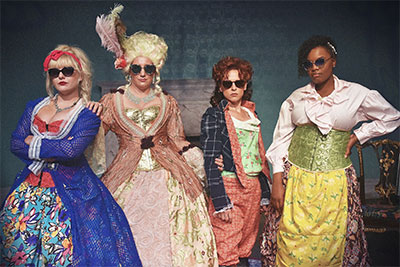 How many plays do you see in a year?

Bless you dear Lindsey! What has emerged as far as ideas, trends, playwrights, or downright annoying behavior this season so far?

Right now, it’s all about the new, which is invigorating. Instead of populating their seasons with only the good ol’ standbys, more theaters are taking a chance and trusting that their audiences will welcome a fresh voice. But that said, man there have been a lot of Mamma Mia!s and Sweeney Todds recently.

The Mamma Mias and Sweeney Todds are our tax for the more risky things. Who are the movers and shakers when it comes to producing new works?

Jeffrey Schmidt has kept his promise about making Theatre Three a space for new work, not only by dedicating the basement stage, Theatre Too, to developing local playwrights (Matt Lyle, Jessica Cavanagh), but also its mainstage. They’re bringing back a reworked version of last year’s Solstice (from various playwrights, including Jonathan Norton), along with the new works The Manufactured Myth of Eveline Flynn (by Ian Ferguson and Michael Federico) and Raptured (by Lyle and Matt Coleman).

But of course we can’t forget about Kitchen Dog Theater and its yearly New Works Festival, nor Imprint Theatreworks’ First Impressions Festival and On the Verge series, which presents plays and readings that have an immediacy to them (like Lyle’s newest, Too Many Crucibles, performed the night before the midterm elections). Dallas Theater Center should get a shout-out, too, for putting Norton’s Penny Candy on its mainstage, and Second Thought Theatre for producing a new play by DFW local Blake Hackler each year for the last three seasons. 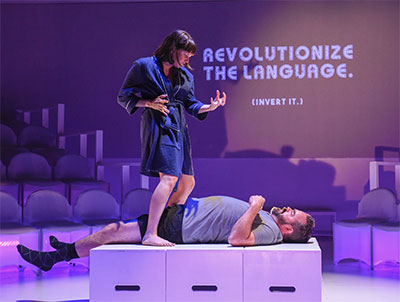 How is the city doing producing works by women? Anyone to call out for their attention to producing women playwrights?

Obviously Echo Theatre, which has been bridging the gender gap and exclusively producing plays by female playwrights since its founding in 1988. Imprint Theatreworks’s name comes up again here too, mainly because its 2018-19 season is based entirely around women’s voices (including Sarah Ruhl, Leah Nanako Winkler, and a musical about Lizzie Borden). There’s a newly formed company as well called Lily & Joan, which has yet to produce its first show but has promised to be inclusive of female and female-identifying artists, both on and offstage.

Name three standout shows you have seen this season and why.

It’s technically part of its last season, but Second Thought Theatre’s August/September production of Alice Birch’s Revolt. She said. Revolt again. was riveting. Four extraordinary women and one brave man cycle through scenes that are purposefully and delightfully uncomfortable, examining women’s bodies, professional expectations, familial obligations, and the language we use to discuss it all. Encircling the stark white stage with the audience meant you could watch the other patrons squirm or catch someone’s eye during a triumphant moment.

Another one that’s technically last season but has stuck with me is Kitchen Dog Theater’s Pompeii!!. The new musical that debuted in April was part vaudeville, part satire, and 100 percent silly enjoyment, with several earworm tunes (the DFW Critics Forum awarded the team — Cameron Cobb, Michael Federico, and Max Hartman — a special award for its score).

My third choice is (surprise!) another new work. Brenda Withers and Jason O’Connell’s new take on Cyrano debuted at Amphibian Stage Productions in Fort Worth near the beginning of the year, with one of the country’s most popular playwrights, Kate Hamill, guest starring as Roxane to John-Michael Marrs’ Cyrano. But each of the five cast members got to flex their quick-change muscles, switching between dozens of characters at lightning speed in a fun and flirty adaptation that still managed to tug at the heartstrings. 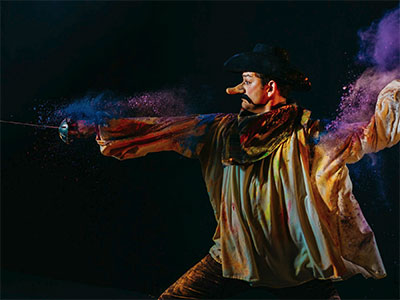 In terms of actors and directors, who are you watching?

I’m also intrigued by Ana Hagedorn, a new Brierley Resident Acting member at DTC. Before she joined there, she researched and wrote a well-received one-woman piece about Margo Jones called Let Me Talk My Dreams. I sadly missed that independent production, and I’m still kicking myself for it.

We can’t go to everything, although I know you try! NTX is a huge area. What is the farthest you will drive to see a play?

I do Fort Worth quite often, and have made it up to Denton to see a piece or two. Luckily, nearly everything is either in Dallas (and its surrounding suburbs) or Fort Worth, so it is certainly doable to cover the main cities.

There are some newbies on the block. How are they doing?

I think Imprint had a phenomenal first season, and I can’t wait for its second. We also had a newbie artistic director in Joanie Schultz, but she just recently left WaterTower Theatre after only two seasons, reportedly due to conflict with the board and subscribers. I was energized by her fresh selections and dedication to diverse storytelling, but I can certainly see how many would view her seasons as a huge departure from the Addison theater’s established programming.

What would you tell people wanting to start a theater troupe in NTX?

Find your niche, and figure out how you can tell the stories that you think aren’t being told yet. We have A LOT of theaters (it’s such a good thing!), but DFW is still like a small town. Everyone knows and works with everyone else, so it’s important to cement a good working relationship early on. But also: I’m not that crazy 😉 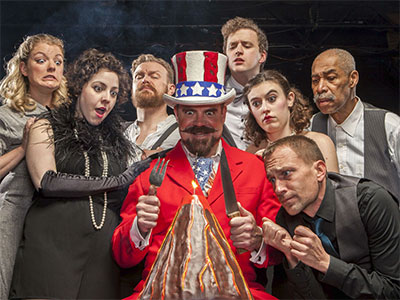 What has changed since #metoo?

People seem less afraid to speak up and call offenders out, and that’s resulted in a few people who formerly held positions of power being ousted. More theaters — but still not enough — are also finally starting to understand why intimacy directors are necessary, and actors are feeling more empowered to request or demand them. Overall, I’ve noticed a reassuring atmosphere of “we see you, we believe you” permeating the community, and it feels like everyone has each other’s backs.

The arts writer is an endangered species. Are there fewer folks writing about theater?

Far, far less, including, sometimes, myself. When the regular workload at CultureMap gets too heavy, reviewing has to then sadly go on the back burner. But many of the theaters still generously invite me to attend performances anyway, and I do all that I can to help give them press in other ways (recapping their fundraising parties, announcing new seasons, etc.).

How would you describe Dallas audiences? In Houston, it seems there are standing ovations after every show. It could be a standing ovation or people wanting to get to their cars.

Dallas is definitely a standing city; I am often the only person sitting during curtain call, unless I’m hurrying to get to my car. I think there’s still a romantic aura for most audiences that surrounds going to the theater — either that or people just want to feel like they got their money’s worth, and a standing ovation re-enforces that feeling.

What are some challenges NTX theaters are facing right now?

It’s the same old tune: not enough funding, scrambling for affordable performance and rehearsal space (if they don’t already have their own building), and trying to keep and attract new subscribers. There is definitely the desire to produce new works, especially from diverse voices that have been quieted in the past, but it’s walking that thin line between brave, unknown programming and familiar, traditional crowd-pleasers. We’re also still dealing with a continued talent drain to New York and other cities, but a lot of the larger theaters see prestige in bringing actors in from out of town. An old (but still relevant) joke is if you want to be cast at theater X, Y, or Z, you have to move to New York first.

I worry about that in Houston. Keeping artists in Texas is an ongoing problem. But let’s talk about something happier. What are you most looking forward to and why?

Sarah DeLappe’s The Wolves at Dallas Theater Center, but that could be because its last two sports-themed shows (Colossal in 2015 and The Elaborate Entrance of Chad Deity in 2012) were so immersive and enthralling. Also Incognito by Nick Payne at Second Thought Theatre, for three reasons: I’m a fan of Payne’s twisty storytelling style, STT artistic director Alex Organ is directing again after a hiatus, and Drew Wall is always compelling onstage.

What do you do when you are not watching theater?