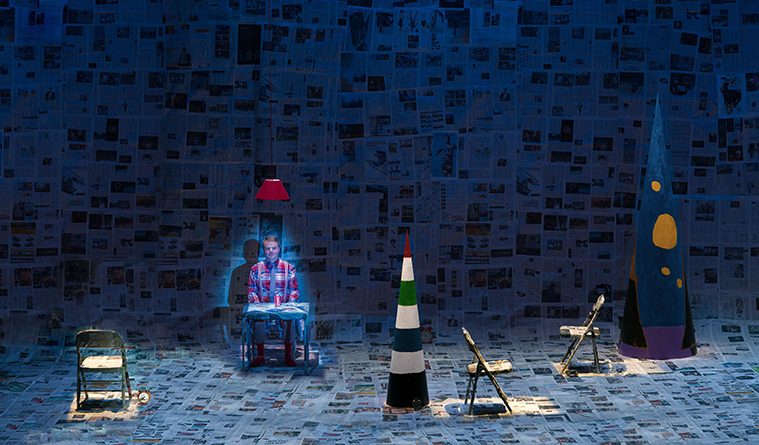 Christopher Knowles: In a Word at the Contemporary Arts Museum Houston 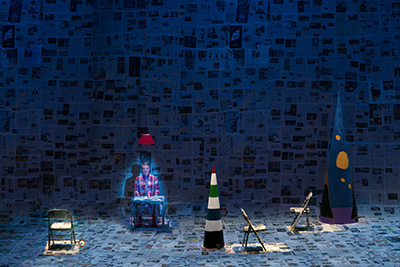 While I was viewing this exhibition, a man approached me with an unsolicited opinion.   He was older, in his late 40s or early 50s, white or white-passing, and upset about the exhibition. The core of his concern seemed to be The Sundance Kid is Beautiful, an installation in which the floors and walls of a space, as well as an assortment of objects, are covered in newspaper. An empty green window frame hangs from the ceiling, alarm clocks litter the floor, and cones with childlike drawings and patterns are carefully placed among them. The man’s argument was that he wouldn’t have been impressed even if this had been done by a child—an odd twist on a common complaint about contemporary art. He then went on to ponder aloud why this artist should be so well known.

On view at the Contemporary Art Museum Houston through March 25, Christopher Knowles: In a Word is a survey of the artist’s work from the 1970s to recent years. The exhibition consists of videos, poetry, typing, paintings, and the aforementioned installation. Throughout the show, tombstones provide constant reminders that Knowles falls on the Autism spectrum. Autism, for those unfamiliar, is characterized by challenges with social skills, communication, and repetitive behavior and is often associated with unique strengths and differences. The artist’s view of the world follows logic, but it’s a logic many of us are unfamiliar with, and he shares what he sees through his work.

In the ephemera on view, visitors can read letters and postcards written by the artist to his family. They are rife with articles and prepositions yet short and to the point. These letters correlate closely with Knowles’s poetry, in which he writes single words or blocks of a phrase that repeat with slight alterations until the meaning unravels. The way Knowles rips the text apart allows the audience to see it as phrase and sound alone; without implied meaning, we are able to hone in on the shape of the letters and the intonation of the phrases as we repeat them externally or internally.

A major focus of Knowles’s work is communication—a lasting interest that he’s had since taking lessons on communication skills at a young age, connecting to his interests in motion, time, and measurement. They may seem disconnected at times, but Knowles appears to view them collectively, picking out the details he needs for a given work and neatly returning it to its allotted place when he’s finished.

Time in particular is a recurring theme throughout his body of work; he often includes clocks, watches, and timepieces. Meticulous in his awareness of time, Knowles uses his poetry to detail radio stations and pop culture lists that capture moments in time by the day, week, or year. At a glance, they may seem like nothing, but Knowles offers up empirical evidence of what life is like in a given moment. This meticulous nature can also be seen in his typewriter drawings. They show extreme attention and care as the artist reprocesses objects and spaces through a keyboard and a selection of inks.

The measurement of time plays a crucial role in life, but there are times in the exhibition where Knowles looks to be a passive observer of the world. Even still, he somehow simultaneously manages to fulfill his role as an active participant, stepping out of the world to rearrange some mundane, everyday item and bringing it back in to show it to us from a new perspective.

Although covering a room in newspaper may seem like something a child might do, the installation is merely an element of a larger performance in which the artist allows the audience to directly engage with his practice. Knowles communicates his logic through his poetic reconfigurations. He offers his audience an opportunity to examine what he sees in a very raw form, and it is not one to be squandered.