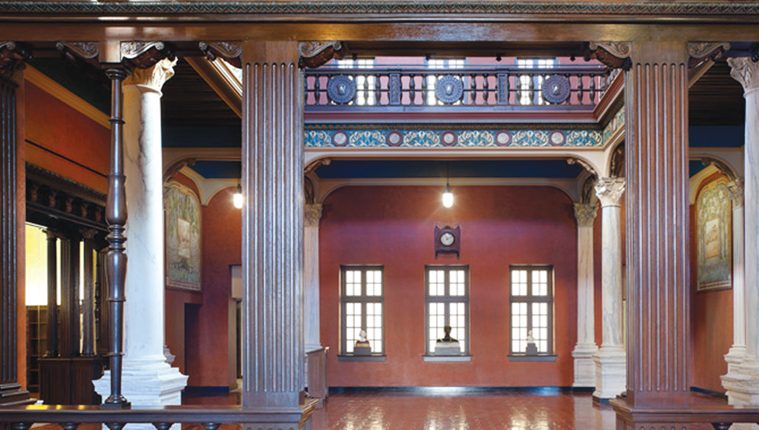 Tudor Gallery inside of the Julia Ideson Library. Photo: Gensler.

On December 5th, 2011 the City of Houston was given a beautiful jewel. After two years, 32 million dollars and a painstaking restoration by Gensler’s Barry Moore, the Julia Ideson Library, one of Houston’s earliest and most prominent libraries, was reopened to the public.

The library, home to the Houston Metropolitan Research Center (HMRC), features a new environmentally controlled archival wing for its rare books and objects, and a fully restored interior space. The coffered ceilings, painted wood, historic lighting fixtures, polished brass, and terra-cotta tiling has been returned to its stunning original state. Like many public libraries the country-over, it endows the reader with a sense of sophistication that fits an elevated pursuit of knowledge. It is without a doubt one of the grandest of Houston’s public spaces.  Houston could benefit from a bit more public grandeur.

The Julia Ideson Library was first opened to the public on October 17, 1926, as part of a major civic plan for Downtown Houston; a plan that would have included a City Hall (City Hall eventually arrived, but decades later, and in an Art Deco style). The architects Cram and Ferguson, with William Ward Watkin (also architects of many original buildings at what was then The Rice Institute), were awarded the job.

The original plan for the library shows that a second perpendicular wing, pointing south and parallel to Smith Street, was intended for the library, but there were financial troubles, and the wing was never constructed. The library, as it opened in 1926, was whole, but never fully complete; and its presence on the block confirms this recently fulfilled potential. The library sat on roughly half of the city block and relegated the South side to trash collection, mechanical spaces, and empty wind-swept dereliction. Nobody used that space as it was virtually an enlarged alley. Not so any longer.

The new 21,500 square-foot wing, the wing that was originally drawn by Cram, Ferguson and Watkin, now expertly reintroduced by Barry Moore, revitalizes that entire city block and possibly the entire small four-block city-hall area. Instead of a wind-swept ally, the Ideson Library offers citizens of this fair city a lovely outdoor reading space protected but still integrated into the urban outdoors.

This new arm of the building not only reinvigorates the exterior urban space, but liberates the interior public space to accommodate new and varied uses. The majority of the books (including 4.5 million photographic images of historic events and everyday life in Houston, 150,000 sets of architectural drawings, 7,000 volumes of rare children’s books, 15,000 volumes of rare books and pamphlets, and numerous rare books, such as a fifteenth-century illuminated Book of Hours from Flanders, a 1520 edition of The Odyssey, and 1615 edition of Don Quixote) are now stored in the advanced climate-controlled environment of the recent addition. This means that the 1926 historical space of the library has been repurposed as an event space, reading rooms, a gallery, and, quite simply, elegant public space. There are places to sit, study, work and read, as well as now several large rooms for private events, parties, galas and other celebrations.

Consequently, these historic rooms at many times feel somewhat empty. During normal business hours, there’s simply not much going on. Additionally, there’s a kind of expectant or longing quality to the rooms, as if they are memorials to a glorious past or anticipating some kind of future activity. Right now, they are literally waiting rooms that wait. And despite its free admission and open policy to the public, one isn’t really convinced that this is a public library, at least not in the same sense as the main branch lending library across the street designed by Morris Architects, that at any given time is crowded with urban citizens using the various computers and materials. Nor is it like the many other public libraries across the country (places where I grew up in the hours after school had closed and I needed a supervised place to study before my parents came home).

The Julia Ideson Library is a public space with the feel of a grand civic function that has lost something of its relevance in today’s downtown Houston. It stands between two worlds; the height of Houston’s public library usage and its currently much-curtailed civic utility.

One can’t help but notice that the renovation comes at a particularly sensitive time in the history of Houston’s Public Library service, where the operating budget for the library system has been reduced across the board by 70% over the last two years and the very existence of the public library is hanging by a thread. One might surmise that the event spaces and reception rooms in the newly renovated Julia Ideson Library are an attempt to offset some costs from dwindling public support, but it’s perhaps best that one doesn’t pry too much into such affairs. It is, after-all, a very generously donated public space to the city and we should be thankful at least for that.

–Ned Dodington
Ned Dodington is the Director of Caroline Collective, a founding board member of C2 Creative, Chief Editor of AnimalArchitecture.org and a designer at PDR.