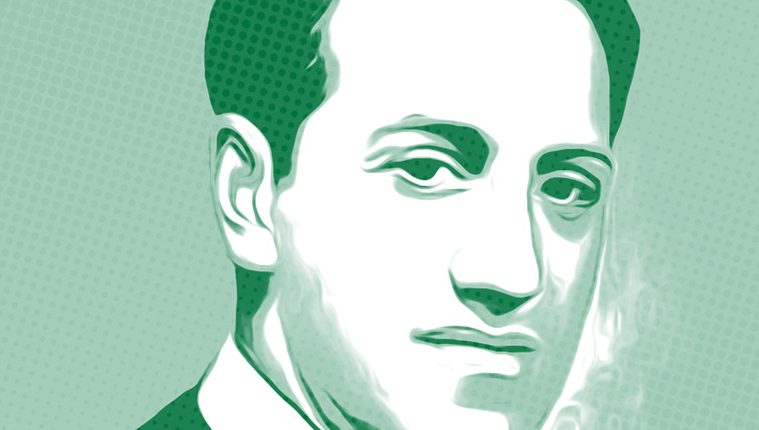 With all the media hype lately about the undead, what with vampires, werewolves, zombies, and resurrected ghouls getting their own TV series and movie franchises, it was just a matter of time until a dead musician played a concert.

That time is now. In a Valentine’s night concert, the Dallas Wind Symphony pays tribute to George Gershwin by having him play his “Rhapsody in Blue.” In a feat of technical wizardry that is equivalent to putting a man on the moon, the American composer, who died in 1937, will again perform before a live audience. The night’s program will also feature other Gershwin classics; a still-very-alive Jeff Hellmer will play the “Concerto in F” and jazz vocalist Guy Forsyth will croon some Gershwin hallmarks.

The Gershwin guest appearance is the brainstorm of Zenph Sound Innovations out of Raleigh, NC and piano company, Yamaha. The behind-the-scene story of recreating a virtual Gershwin performance is painstakingly brilliant.

It starts with a recording that Gershwin himself made in 1924. Back then, the microphone and electronics were still in the future. The Paul Whiteman Band, for which the piece was written, and the composer at the piano, all squeezed around a gramophone horn which cut grooves on to a wax disk that carried the vibrations. The sound quality was, obviously, less than ideal. There was also no way to edit. The record was laid down in just the one take, errors and all. Further, the maximum time was nine minutes, and that still meant dividing the piece into two 4½ minute sides. That presented a problem, since they were recording a 15-minute version of “Rhapsody.” Cuts had to be made.

The 1924 recording was the starting point for the engineers at music technology company, Zenph. With advanced computer software, they carefully analyzed every note. First, they had to drop out the Whiteman band and all of the considerable background noise. Then the real work started.

Each note has a number of parameters. There is how hard the key is hit, how the sustaining pedal was worked, and how fast the pianist goes to the next note. There are an unlimited number of ways a pianist can touch the keys to play the note, each sounding ever so slightly different. Zenph claims that they can recreate one thousand levels of dynamics and touch for each of the 88 keys. Then it was mapped for the approximately 10,000 notes in Rhapsody in Blue. The mind boggles.

Gigi Norwood, Director of Education and Concert Operations for the Dallas Wind Symphony, said that, “We worked with the Library of Congress copy of the recording. Our arranger, Dean Bouris, went through it note by note to make sure that it matched the set of parts we have for the wind ensemble. These are copies of the original Whiteman parts. The Zenph went to work.”

Kim Campbell, founder and executive director of DWS, said Gershwin did the cuts himself. “It seems to hold together. Somehow, you don’t really miss the cuts. But, be warned. It sounds very different, more like mid-20s jazz than the classical, but jazz- tinged, performances of today,” he said. “It is really fast, and a little raucous.”

You can bet that Gershwin took the piece a little faster so as to fit as much music as possible on the record.  “Even though this was faster than George might take it if he were alive, we are stuck with the tempo of the recording. There is an introduction that we can play like we want, but once George starts we are on for the ride,” said Campbell.

Virtual George will be “playing” on the Yamaha Disklavier Pro, a nine foot concert grand that is “…packed with a full set of sophisticated electronics: fiber optics, sensors, solenoids, and computers,” brags a press release. “The solenoid is an electrically-driven magnet, one positioned at the back of each key. It’s job is to replicate, in inverse, what your finger would have done in pressing the front of the key.”

The piano will play itself. Campbell says there are no plans for a Gershwin look-alike or a medium to summon a vision.

The other pianist on the program, Jeff Hellmer, who holds the post of Distinguished Teaching Professor, Butler School of Music, at the University of Texas at Austin, doesn’t mind sharing the stage with George Gershwin. “I’m excited to be involved with this opportunity to present the world premiere of this “re-performance” of “Rhapsody in Blue.” It’s a chance for all of us to cross the years and play music with Gershwin himself — or at least the ghost of Gershwin,” he said.

So, the North Texas audience can sit back on February 14 and enjoy some of today’s most-advanced music technology married to a timeless performance of an American masterpiece, just days after the 88th anniversary of the original concert. Information at www.dws.org.