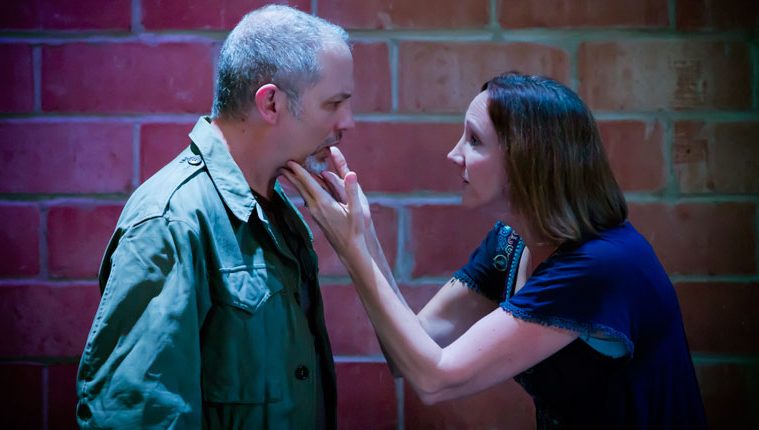 Deep in the Marrow

Stark Naked Theatre co-artistic directors Kim Tobin and Philip Lehl tackle the roles of Macbeth and Lady Macbeth in their first production of Shakespeare’s tale of ambition run amok. Tobin and Lehl sat down with A + C editor Nancy Wozny to discuss the iconic Scottish play.

A + C: Usually seasons end with a little fluff, a parlor drama, or a shiny classic comedy. Star Naked had other plans.

Philip Lehl: Our choice of Macbeth in this slot is less about some sort of seasonal strategy, and more to do with: “hey, we’ve got a slot, and we really want to do a Shakespeare play, let’s put it here!”

A + C: How long has Macbeth been stewing?

Kim Tobin: I have wanted to do Macbeth probably since I was first interested in Shakespeare, which is about 1984. Lady Macbeth always fascinated me. My interest grew as I became older and worked in corporate America, and had my own exposure to ambition, greed and power.

PL: I played Macbeth first when I was twelve and I’ve wanted a second shot at it since then.

KT: I did. I have always had a vision of Lady Macbeth that I wanted to get to play with and bring to life so I chose the play. With Philip as Macbeth how can I go wrong?

A + C: Isn’t this play supposed to be bad luck?

PL: Well, there’s this curse thing: I actually observe the rules around it.  I didn’t when I was a young actor, and then one day I broke the rules, and something really bad happened to me almost immediately. It was probably coincidence, but I don’t tempt fate anymore.

A + C: How did seeing Punchdrunk’s  Sleep No More  influence you?

KT:  Seeing that show inspired some of what had already been percolating for me. There was imagery in Macbeth that I always felt was not on the page and seeing another company set that free, opening me up to bigger ideas and hopefully imbuing Lady Macbeth with a more complicated character. It confirmed for me the most powerful part of the story is that which ultimately determines how you experience anything. What you take away is the pictures you have imprinted in your mind.

KT: It is a great challenge – but that’s what makes it exciting!  Taking on something that truly asks me to stretch my skills to new limits is what makes me a better artist— and ultimately, a better person.

PL: At this point in my career, it’s important to me to take on roles that are truly difficult, and by that I mean roles that scare me, because I don’t know how to do them. Macbeth is one of those.

A + C: I appreciated the edge Horse Head Theatre chief Kevin Holden gave to Dinner With Friends earlier this season. How do you see his directorial skills as a match?

PL: Kevin is one of the most amazing collaborators I’ve ever worked with. He and our design team are truly special that way: Trying to do a massive classic play with an autocrat in charge is death, also we were looking for people who could contribute and accept the contributions of others.

A + C: What were you interested in as you gathered the cast?

PL: We were looking for  actors with a technical facility with language, and an ability to embrace our acting aesthetic. If Shakespeare isn’t spoken in a way an audience can understand and relate to, there’s not much point in doing the plays.

A + C: Fate vs. free will, love vs. control, corruption, betrayal, and the consequences of ambition run amok…that could be yesterday’s news.

PL: All that is yesterday’s news and tomorrow’s news. Shakespeare gives us are these experiences – the experiences of Mr. and Mrs. Macbeth, for instance – that let us see the faults and foibles that exist in all of us, somewhere deep in our psyches.  And he invites us to go through the horror of that in the relatively safe environment of the theater, instead of the real world. All dramatists aim to do something like this, of course, but Shakespeare, for me, gets deeper into the marrow than anybody else.

A + C: How would you describe your interpretation without giving away too many secrets?

KT: Our production will be set in the place where the political, corporate world intersects with the military; where Blackwater rubs shoulders with Karl Rove, Bill Gates and Condoleezza Rice. Not that the play is set in the modern world – it’s not – it’s set in an imaginary world, where these bloodthirsty, power-hungry people can make sense to a modern audience. Guns may live outside the walls; but inside are only knives, and the knives are very, very sharp.