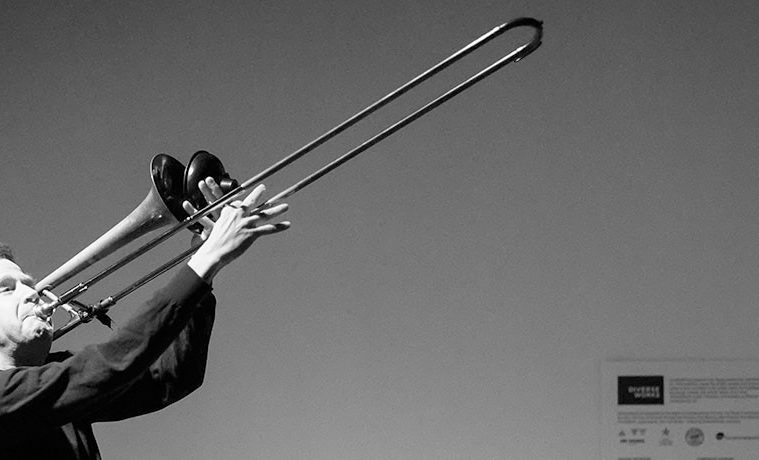 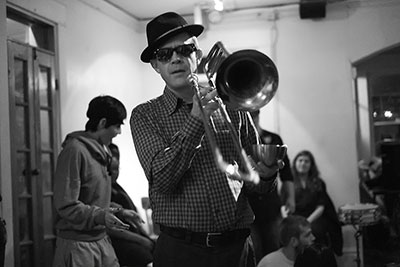 Before there was such a thing as Nameless Sound, Dave Dove had the idea of starting a creative music workshop for children in Houston. In 1997, he approached Alice Valdez at MECA (Multicultural Education and Counseling Through the Arts) with the idea. Years later, he still keeps that same workshop at MECA. That space, he says, “is the foundation of my practice as a performer and an educator. I started thinking about music education and how conservative it is. I wish I had been encouraged to be more creative. It’s not about replacing traditional music education, but about filling a missing piece.”

Improvisation is an important part of music education, but it’s worth noting that it’s also a big part of Music Therapy. Research shows improvisation can be part of successful therapeutic interventions for people with autism, Alzheimer’s, and a variety of medical challenges. For a lot of people, improvisation is an empowering and healing force.

Nameless Sound began as an umbrella organization under composer and innovator Pauline Oliveros’ Deep Listening Institute. Oliveros has been an important mentor and collaborator throughout Dove’s career. Deep Listening Houston gave its first official concert in 2001. 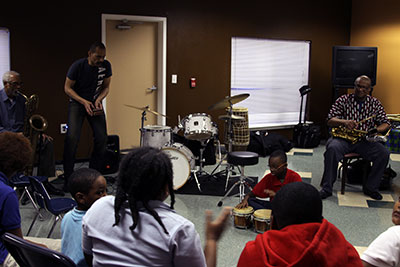 The organization expanded, bringing workshops to public schools, homeless shelters, special needs programs, and refugee communities. In 2006 they broke off from the parent organization and officially became Nameless Sound. They currently facilitate 16 workshops weekly and employ three part- time teachers. Dove says, “A couple of years after I started I got more of an understanding of how valuable this work can be for reasons other than musicality. The intimacy of the class. People really bring themselves to it. It’s a space for vulnerability and learning.”

Talking with Dave I felt two different understandings of the term “space surface.” The first is a physical and aural awareness of performance venues and locale. Creative music performers seem attuned not only to each other but also to the environment they occupy. Every place has a different spatial and sonic footprint.

Another understanding  of space is that beyond the merely physical, it’s a way of treating others, an approach to education. Creativity is not a personal quality someone possesses or doesn’t possess: It’s an opportunity for learning that’s deliberately created. A creative music workshop creates a space in which spontaneous and exploratory learning can take place without judgment. It’s a relationship between people based on empathy, equality, and empowerment. “You take the hard goal out,” Dove says. “Work with what you’ve got. In that context young people can be creative. It can be one person, ten people, or twenty people. That’s my practice. Whoever comes, I work with them.” 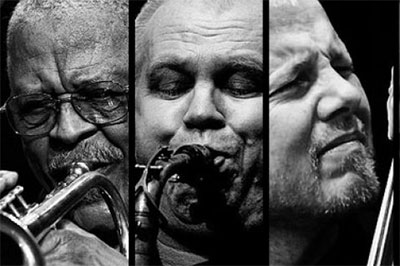 The other half of Nameless Sound is the concert series. Every year they bring some of the best performers in creative music to Houston. Over the last few years, some of the most moving and powerful performances I’ve attended have all been Nameless Sound shows. The two halves of the organization have always overlapped. When performers come to town they lead their own workshops. Spring shows include the Bobby Bradford Quartet at MECA on March 25, Michael Pisaro at the James Turrell’s Twilight Epiphany Skyspace on April 22, and Charles Curtis at the Rothko Chapel on April 24, in partnership with the Rothko Chapel.

Each year Nameless Sound presents its Resounding Vision Award to “musicians whose efforts transcend aesthetics and resonate beyond the performance venue.” Last year, Roscoe Mitchell received the award and the concerts put on in celebration were an ecstatic and joyful experience. 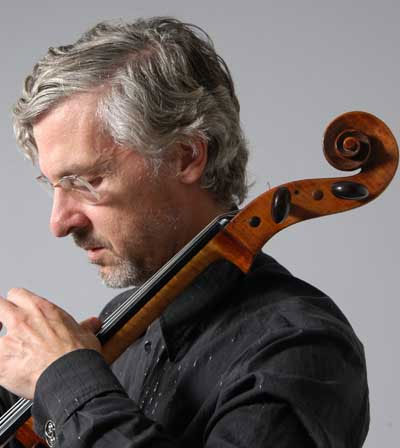 I’ve been attending the workshop at MECA and it’s an ear-opening experience. We play quite a bit, but again and again we return to listening. Listening isn’t just hearing; it’s a practice of awareness. Oliveros calls it deep listening. She writes in her 1999 essay Quantum Listening: From Practice to Theory, “Deep listening is listening in every possible way to everything possible to hear no matter what you are doing. Deep listening represents a heightened state of awareness and connects to all that there is.”

Last month at DiverseWorks, Nameless Sound performed a marathon concert of  Oliveros scores as part of SonicWorks. There are no notes in Oliveros’s scores: rather, the scores contain sets of instructions, suggestions, and meditations that guide rather than dictate performance. I don’t think it’s possible for any of the pieces to be played exactly the same way twice. There’s a wonderful moment where we’re all listening to the performer, and we’re listening to them listening, and we realize that we’re also really listening to each other listen, and maybe that’s what deep listening is about.

Trying to understand what we call creative music is less a project of knowing for me as it is a never-ending series of encounters and illuminations. I don’t know if there’s a map, but there’s more than enough territory. So maybe that’s why the sound is nameless.

No matter who you are as a musician, listener, or human being, there’s always an opportunity to more deeply explore music, sound, and creativity. Nameless Sound has always been and will continue to be an important organization that enables us to do so.