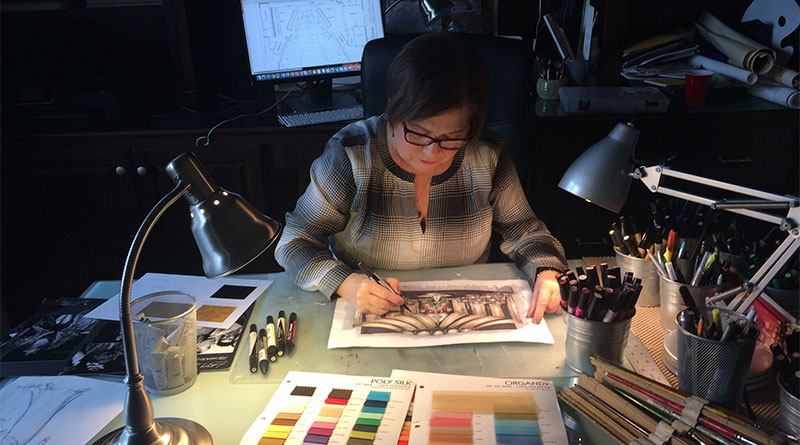 In a Texas State University production of A Midsummer Night’s Dream, the only thing visible to the audience until the play began was a ghost light on the stage. (A ghost light is a light left burning on stage at night for both sentimental and safety reasons.) One audience member grumbled, “Really? They call this a set? There isn’t anything here. I can’t believe they didn’t do a nice set for this play!” Then, as the show began, the ghost light flickered, and Puck magically made the scenery and actors appear. The woman then breathed, “Wow! That was great!”

Michelle Ney, an Austin-area costume and set designer who often works at the ZACH and serves as Head of Design & Technology at Texas State University was in the audience that evening. As the designer responsible for the set, this woman’s reaction made Ney’s day. She said, “The director (Charles Ney, who doubles as her husband) and I were exploring the idea of a dream, the notion of magic, the magic of theater, and who moves the play forward…We decided that Puck was the one who, through his screw ups, kept creating the conflicts that moved the play forward. I had also been playing with the idea of the crew closing down the theater post performance, and putting out the ghost light, then sitting on the side of the stage and falling asleep. Chuck then threw in the idea of how Puck might just be some young guy who gets into the theater from the street and wanders onto the stage, the light flickers, and he realizes that through the snap of a finger, magic can begin to happen.” Imaginative magic indeed!

Ney moved around Louisiana, Texas, and Colorado as a child. She began exploring drama in junior high school. Entering Southern Methodist University as an art major, she quickly found her creative home in theater design, allowing her to combine her artistic talent with theater production. Ney’s husband’s family were long-time hill country residents, so the couple moved to Austin in 1982. They briefly moved away again, but quickly realized that, “Austin is my home. Since I moved so much growing up, this is the one place where I feel I have roots and I love the people here!” Ney said.

Her formal education includes a design double-whammy: an MFA featuring both costume and set design from University of Texas. She didn’t get all her knowledge from schooling though. During a break from undergraduate studies at SMU, she traveled Europe, returning to Dallas to work as part of Manhattan Clearing House, a theater company in Dallas’ Deep Ellum neighborhood. The building where the theater was had been an old dance hall that had ended its days in a shootout. Some of the company did an exorcism of the space (really!) and then renovated it. This is where Ney met her husband. He started the company and directed their productions. They still happily collaborate on projects.

Manhattan Clearing House’s first show was an adaptation of Bertolt Brecht’s St. Joan of the Stockyards, which they re-titled Joan in Meatland. “We all worked collectively on the adaptation and had visual artists and musicians who were a part of this collaboration. It took a long time to get it up, as working collectively is not the most efficient way to work,” Ney says. “But there are moments from that show that will be forever seared into my memory…[such as] when the owner of the stockyard was trying to escape his guilty conscience and life-size marionettes dropped from the ceiling as he tried to escape, where finally he was surrounded by hanging carcasses. One of the great things about working with non-theater trained artists was that we looked at things in a very non-traditional way.”

“I believe that a well-written play has an inherent rhythm embedded in it, and when I’m designing a set, part of my exploration of the script involves finding that rhythm, determining the kind of movement and spatial interactions of the actors,” says Ney. “Shapes, the way things move in space, and the flow of the story are very important in how I arrive at sculpting the space. I also think a lot about the tension line of the script,  and how I can translate that into visual terms.”

Ney’s adventuresome background and her design philosophy shine through in sets like Philip Grecian’s fun family A Christmas Story at the ZACH that included a stylized giant snow globe as the central backdrop, and Arthur Miller’s A View From the Bridge at Texas State University, where the suspension wires that surrounded and upheld the set gave this tragedy of a common man a taut intensity. The set for Nina Raine’s family dramedy Tribes at the ZACH featured strong vertical lines too. Juxtaposed with a few acutely places curves and projections, this set allowed the play to visually sound out the beat of the central theme of how we hear what we hear.

Working with student assistants also feeds Ney’s creativity. “Going through their process of discovery and the joy they have when the light bulb goes off keeps me fresh and focused on why I do what I do,” she says. Having a mentor as enthusiastic and creative as Ney must be nirvana to her design students. But she says having students also sparks creative thought for her too. Talking over her designs with them will often lead to an “Aha!” moment if there is a particular part of the design she isn’t certain works.

While she loves working with other designers, being able to trick out two of the designs for one show has its advantages. One show she did at Illinois Shakespeare Festival, The Merry Wives of Windsor, allowed her to approach the whole play as a crazy patchwork quilt of fun characters. “I took a Tudor framework, but filled it with a wide variety of colors to reflect the mish-mash qualities of the world, then took the same approach with the costumes,” says Ney. “Because of the busyness of this approach, being totally aware of what was behind and in front of each area allowed me to manipulate value and intensity and create focus where it needed to be.”

Lady Day at the Emerson Bar and Grill, running April 5-30 at the ZACH in Austin, is her current project. Ney, a huge Billie Holiday fan, describes her process.

“The idea behind Lady Day was that this was one of her last performances before she died. While we get a look into the tragedy of her addiction in the piece, we chose to make this production a celebration of her music and her amazing spirit. Rather than treating the theater space like a dive bar, we wanted to have the audience enter into a celebratory space where we are all joining to relish this wonderful artist’s work. To do that, we decided to treat the space in an immersive manner. Audience members will be sitting onstage, there are chandeliers throughout the house, and the audience can walk onstage before the show and during intermission to the bar that is part of the set for adult beverages.”

Ney sums up her approach. “We tell the same stories over and over, but each time find something new that resonances with us, that makes us see a story in a new light. Working with different artists in different places keeps me open to that.”