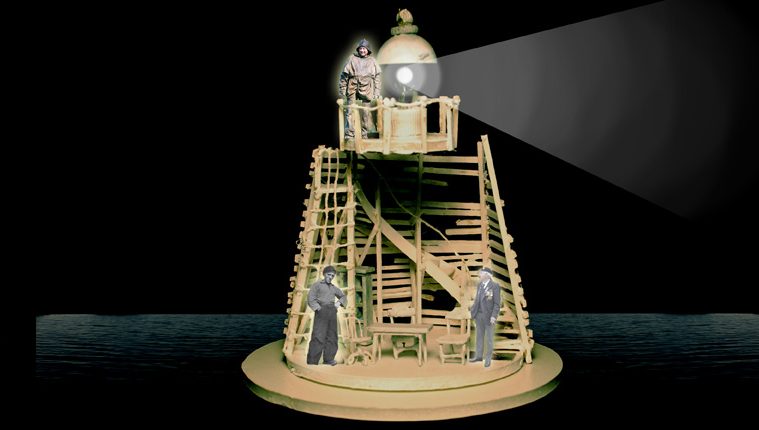 You would think that the worlds of opera and theater would be entwined; they have so much in common. They both present staged productions that use actors, order singers, sets, costumes, directors, lighting, and even orchestras and conductors. They both tell dramatized stories by peeling back the fourth wall and allowing the audience voyeuristically to peek in on the lives and situations they portray. The fact is: they are almost completely separate. Theater and opera occupy two worlds, a universe apart, that are as different as those inhabited by hockey and basketball. There is some overlap of audiences, but practically none of the professionals nor the distinctive cultures involved.

This is why the current effort between the Dallas Opera and Dallas Theater Center, to co-produce Peter Maxwell Davies’ chamber opera “The Lighthouse,” is so fascinating and eagerly anticipated.

When Keith Cerny, a mild-mannered visionary if ever there was one, took over as the General Director and CEO of the Dallas Opera in 2010, he was determined to reach out to the entire arts community. He wanted to create a synergy that would enliven the atmosphere and unleash something new. He started by walking across the street.

The new Winspear Opera House is just a few short yards from the state-of-the-art Wyly Theater. Here, he found a kindred spirit in the frenetic energy of Kevin Moriarty, who has made a splash in the arts community since becoming Dallas Theater Center’s artistic director in 2007. Cerny suggested a collaboration and the idea for the upcoming co-production was put in motion.

“The opera house is just across the street,” said Moriarty, “but is might as well of been miles away until Keith knocked on the door.” Both organizations may reside in adjacent facilities of the AT&T Performing Arts Center, but those facilities and the image they project couldn’t be more different.

The Margot and Bill Winspear Opera House is a modern take on a grande dame, all elegance and posh, as befits the world of opera. It has a 2,200-seat performance space that was engineered specifically for opera and ballet, complete with all the trappings befitting the great opera houses of the world. There is a 318-rod LED chandelier that rises into the ceiling, plush seating, a Wagner-sized orchestra pit, and a horseshoe of balconies complete with elegant box seats.

The Dee and Charles Wyly Theater, on the other hand, is a contemporary take on the  l’enfant terrible, strikingly unorthodox, innovative, and slightly avant-garde. It is a 575-seat box that can transform itself into a proscenium, thrust, arena, traverse, studio, and flat floor configuration. No chandeliers here, instead the design elements are modernist poured concrete with fluorescent lime green accents. There is an orchestra pit but, frankly, it is designed with Broadway show-sized groups, not classical orchestras in mind.

There was no doubt that “The Lighthouse” would be produced at the Wyly instead of the Winspear. After all, it is a chamber opera and written on a smaller scale. There are only three characters and the piece uses a small orchestra, whose players will be drawn from the Dallas Opera Orchestra. It would be underwhelming at the Winspear but is a perfect vehicle for the light-on-its-feet Wyly.

Artist rendering for set design for “The Lighthouse.”

However, opera in the Wyly presents challenges.

“At first, I didn’t worry about the orchestra since the score only calls for 13 players,” said Moriarty. “What I didn’t count on was that there is so much percussion to squeeze into our pit, including two pianos — one of which has to be out of tune — and a celesta. As of now, we think that we have a plan to make it all fit, but we have a Plan B in case it doesn’t.”

Moriarty will stage “The Lighthouse” and brought in Broadway set designer Beowulf Boritt, his frequent artistic collaborator, to create the sets. This will be the first opera for either of them. Both have distinguished careers in the theater world, but now face the divide that separates opera from Broadway and regional theater.

“I always wanted to work in opera,” said Boritt. “My original exposure to the theater was through opera. My mother sang in the Memphis Opera Chorus while I was growing up. I went to all the dress rehearsals and I have a vivid memory from then that changed my life. It was a production of Verdi’s ‘Macbeth’ and I saw two stagehands pushing around massive boulders. It looked like magic to me and I was hooked.”

While he went into the world of theater, cracking into the opera world wasn’t so easy for Boritt, who has been honored with an OBIE Award for Sustained Excellence in Set Design, and received a 2011 Tony Award nomination for Best Set Design of a Musical for his work on “The Scottsboro Boys.”

Artist rendering for set design for “The Lighthouse.”

“Every time I showed my portfolio to opera houses, they said my lack of experience in their world caused them to hesitate. Personally, I didn’t get it. After all, a set is a set.”

Maybe so, but the one Boritt designed for this opera is a stunner. He sets a claustrophobic lighthouse, literally, in the sea. “Reading though the opera, it felt like the surrounding water is a big part of the drama; it is why these guys are so isolated. I want it to feel like they are trapped in this little jail cell on this rock, miles from nowhere, with no land in sight,” said Boritt.

This is not without some risk. “Water is heavy, for one thing. It really weighs down the stage, even though it is really only a few inches deep. Also, water has this nasty habit of hunting for the tiniest hole to escape. However, what we have is deep enough to look as deep as the ocean to the audience. It allows us to get the effect we want of the light of the lighthouse flickering off the surface,” Boritt explained.

A set may be a set to Boritt, but Moriarty sees a great difference in directing for the theater as opposed to opera.

“In a play, the director takes the text and decides the pacing and the tone of voice the actor will use. For example, a threatening line in Shakespeare can be shouted in anger or hissed quietly through a clenched jaw. It can be said quickly or every word drawn out. In opera, the composer makes all these decisions by the way the lines are set to music. Also, the action between the lines is similarly set. There are three measures here and ten measures there, for the actor to react or move or whatever. It is a challenge to think about, “What is the subtext of these measures of music when they aren’t singing?” It is a very different experience for me, but I am loving it.”

Fortunately, to help Moriarty in his new endeavor, TDO found a conductor with lots of experience, not only in grand opera, but in chamber opera as well. Nicole Paiement has been the Artistic Director of Ensemble Parallèle since its foundation in 1994 — a professional ensemble, dedicated to contemporary chamber opera and interdisciplinary productions. She has been in the pit for such disparate projects as the hard-to-imagine West Coast premiere of John Rea’s re-orchestration of Alban Berg’s “Wozzeck” to the San Francisco premiere of Philip Glass’ opera, “Orphée.”

She praises both Moriarty and Boritt for their easy collaboration. Her main concern is the acoustics. Musicals at the Wyly, as well as every production of a Broadway show anywhere, are generally amplified. Here, the singers will not wear microphones, as is the tradition in opera.

“I don’t know the hall yet so I don’t have any preconceived ideas,” she says before dress rehearsals begin.  “I know that there has never been an opera produced there and that it is designed for amplified voices, but that is one of the things that will make it interesting.”

Moriarty is also curious about the lack of amplification in opera. “Broadway singers are trained to use amplification. Perhaps this is because they tour to all kinds of different venues, from the barn that is Fair Park to our smaller theater. Also, they usually perform seven performances a week. Opera singers are hard pressed to sing a show twice in one week without risking some vocal damage. It is all quite different in the composer’s demands as well as vocal technique and production with or without amplification.”

Dallas audiences will see the results of this unusual artistic marriage — or at least a serious first date — “The Lighthouse” is turned on March 16 for just three performances. But since the collaboration has been a happy courtship, look for more co-productions between the two titan organizations in the future, now that the light has been turned on.
— GREGORY S ISAACS
For review and video about the production of “The Lighthouse,” go to our media partner www.TheaterJones.com.

For show information and tickets, go to www.attpac.org.