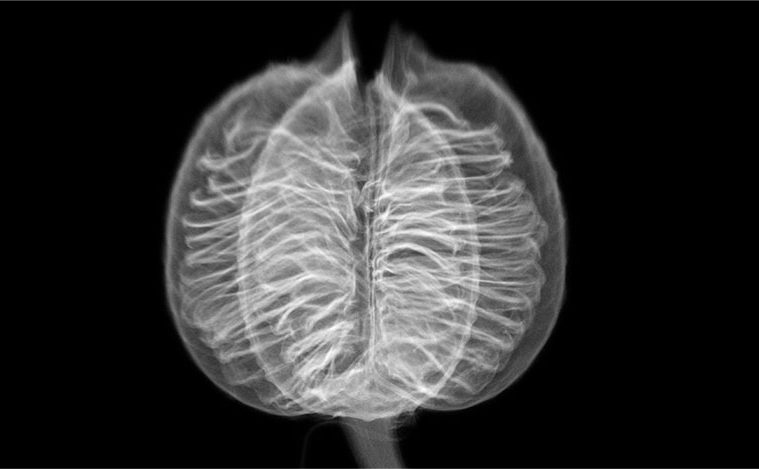 A black circle fills the frame; a dark void within which small white flecks float. These white specks are plant seeds captured with an X-ray, their ghostly white shells and tails caught in a black petri dish. The piece, by the artist Dornith Doherty, is titled Finite and is part of an ongoing series from her project Archiving Eden; the eponymous show is on view at the Amon Carter Museum of American Art until Jan. 14, 2018.

Driven by “a deep-seated anxiety about the acute gravity of climate change,” Doherty embarked on this expansive project in 2008 after reading about the completion of the Doomsday Vault—the world’s largest seed bank—which was built in the Arctic Circle. In subsequent years, Doherty visited this and other seedbanks, botanic gardens, and biological research institutions throughout the world, documenting the places and locations where the biodiversity of our planet’s flora is archived and conserved. Doherty used X-ray equipment at these facilities to capture the hidden structure and inner workings of seeds and plant samples which she turns into collages.

Through the penetrating stare of the X-rays, Doherty creates visually intricate and entrancing still-life images that reveal the disquieting fragility of the fledgling plants and seeds kept to ensure our survival.

Some depict a scattering of seeds caught in a sea of black like Finite while others focus on a single seedling or seed pod. In Red Yucca, we see the intricate entrails of a yucca seed head through its white translucent shell set against the black background. In other collages, Doherty inverts this familiar scheme. For example, Columbian Exchange III captures a bouquet of eucalyptus, pecan, and teosinte seeds. Against the white of the paper on which they are printed, the seeds are set in delicate greys which gives the print the appearance of a watercolor painting.

The other pillar of Archiving Eden is photographs of the research facilities Doherty visited. The artist meticulously documented the buildings and spaces in which Earth’s vegetation is gathered, studied, archived, and stored. Her photographs of these interiors capture the quotidian institutional world of these arks of the apocalypse: An endless monotony of racks, shelves, and containers, the storage rooms and archives are the embodiments of the rigorous practical rationalism of the scientific method. Absent people, these portraits of interiors tell the story of our incessant need to explore, collect, and categorize the world around us—from the wooden apothecary cabinets of the Barley Collection, Vavilov Institute for Plant Industry, St Petersburg Russia to the endless collection of glass bottles filled with seeds in Seed Vault, Kuban Experimental Station, Russia to the brightly lit aluminum shelves of the Incubator, EMBRAPA, Brasília, Brazil.

Doherty’s Svalbard Global Seed Vault, a photograph of the exterior of the Doomsday Vault, captures the grey concrete entrance protruding from the icy hillside overlooking the barren white landscape of the bay below. The permafrost on which the vault was built aids the conservation of the 4.3 million seed samples that can be stored inside, but the desolate landscape in which it is situated feels more like a foreshadowing. By documenting these places, Doherty shows the strangely contradictory nature of these institutions. The sterile rooms, rectangular racks, and clean metal surfaces feel antithetical, even hostile, to the life they are trying to preserve.

Only a small fraction of this extensive project is on view at the museum, but the exhibition represents the artist’s breadth of images. Often hung in pairs that play off each other, the rhythm of alternating ornate X-ray prints with meticulously composed photographs of research institutions creates a dynamic impression. Doherty skillfully and meticulously composes a captivating chronicle of institutions that embody humanity’s understanding and mastery of nature, and the seed banks that serve as monuments to humanity’s exploitation of natural resource—and our ultimate failure to control nature.