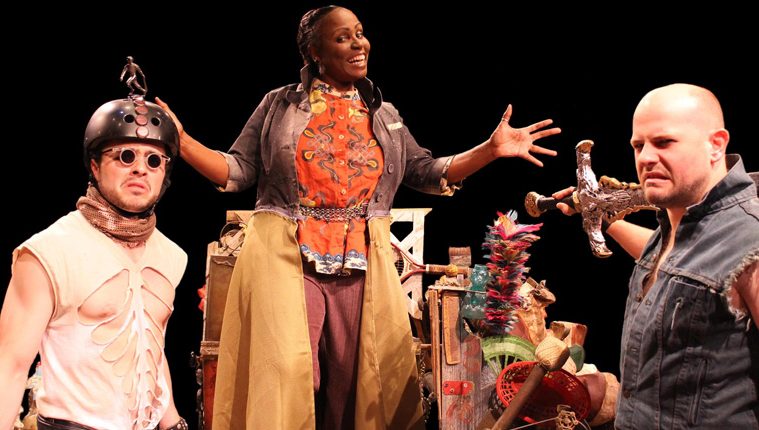 Liz Duffy Adams first amazed Main Street Theater audiences with her play/poem Or, a delicious period piece all set in rhythm. She’s back with Dog Act, a post-apocalyptic play set in the future, which follows Zetta Stone as she travels with Dog (a young man undergoing a voluntary species demotion) to China where there’s work for a couple of vaudeville players. Adams talked with A + C editor Nancy Wozny about her take on Dog Act.

A + C:  I love when the words “post apocalyptic” and “comedy” are found in the same sentence. I imagine you do too.  What brought you to this place?

Liz Duffy Adams: I grew up on science fiction and in particular, I’ve always loved post-apocalyptic stories. I love stories about how people recreate social/political systems and civilization in the midst or aftermath of catastrophe, and protect human culture through the darkest of times. In a usually more obscure way, I think all my work is about trying to think about how we live and how we are human in catastrophic times, which to me is not really all that distinguishable from ordinary life.

A + C:  Your apocalypse comes with a smirk and a smile though.

LDA:  I find that humor tends to enter into my work whatever I do, so I usually think about other things and let the humor take care of itself. In this case, I wanted to tell a certain kind of story set in a dark, dangerous, perilous world, and – since it was partly about theater itself – let it be as ridiculously funny as it wanted to be.

A + C:  Talk about setting a play in the future.

LDA: The future is the most fun setting because you can make everything up! No one who writes futuristic fiction really believes they are being prophetic (or if they do, they’re nuts) – the one thing we know about the future is that we can’t imagine it; it will always surprise us. But you can take things about the present and extrapolate them into the future as a way of talking about the present, and the past, and humanity – what is eternal and what is mutable.

A + C:  Rebecca Greene Udden told me that she selects plays based on the language. I could see her reading one page of OR and saying, “Let’s do it.” It’s such a word fest! Dog Act has it going on too though, especially in the banter. Can you talk about your savvy with colorful conversation?

LDA: I really believe in theatrical language – heightened poetic aggressive outrageous language – that’s what excites me in the theater. Dog was an opportunity to go to town with the language to define the world of the play, the characters, the various tribes by the way they speak. It was tremendous fun working all that out. When I teach playwriting, I always say that the way a character uses language isn’t decoration – it defines and creates the character, which is something I learned from studying Shakespeare. With Dog, I challenged myself to go to extremes with it.

A + C:  I’m curious about the concept of Dog, who is undergoing a voluntary species demotion from man to canine. Did you look at your dog once and think, “Huh, looks like fun?” Can you give us some insight into the character?

LDA: I don’t have a dog, as it happens, but I admire them. The natural virtues of your average mutt puts the best of us to shame. On the one hand, Dog has demoted himself from humanity out of shame and a need to survive in a dangerous world – to live as a dog; specifically a useful working dog, a life of humble, loyal service. Dog has radically effaced himself, a way of hiding in plain sight. No one wonders about a dog’s past. No one expects a dog to explain itself. But in choosing dog-hood, Dog has unconsciously expressed something true about himself, that he himself is unaware of; that he is doglike in the best sense: loyal, humble, loving, and valiant.

A + C:  Good to know that when all else is gone, vaudeville is still around. Can you talk about that choice?

LDA: One thing I’m always interested in is the cyclical nature of human history, the way certain historical moments repeat and echo through the ages. The vaudeville in this play is inspired by traveling players throughout history, from ancient Greece to medieval Europe up through American vaudeville troupes of the early-21st-century, to name just three incarnations. Over and over again, troupes have packed up their costumes and instruments and hit the road, to tell the same stories in new ways for audiences who need to hear them. And I love that, it kills me. To imagine it into the future, to have the characters be performers who are the sole source of art in a very dark future, was exciting to me.

A + C:  So China is hiring actors in the future. That’s pretty funny. It’s always strange to see what makes the cut. Why China?

LDA: In our culture, China tends to stand in for the farthest, most mysterious place, doesn’t it? When I was starting to write Dog and feeling daunted and paralyzed, the way you often do when starting something new, I thought: “Well, it’s like setting out to walk to China. You probably won’t get there, but with such an extreme goal, you’re bound to get somewhere.” So the phrase “walking to China” stuck in my mind and worked itself into the play.

A + C:  I cracked up when Claudia La Rocco in The New York Times called your play “The Road: the musical.” Rhythm, music and song factor into this piece.  It’s nice to hear a little tune as the world crumbles. For you too?

LDA: Yes! Again Shakespeare is my inspiration; the occasional song in a play does something theatrical that words alone can’t do.

LDA:  I rarely do. Sometimes I even dream in words. 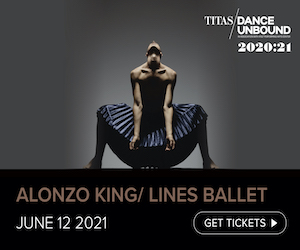