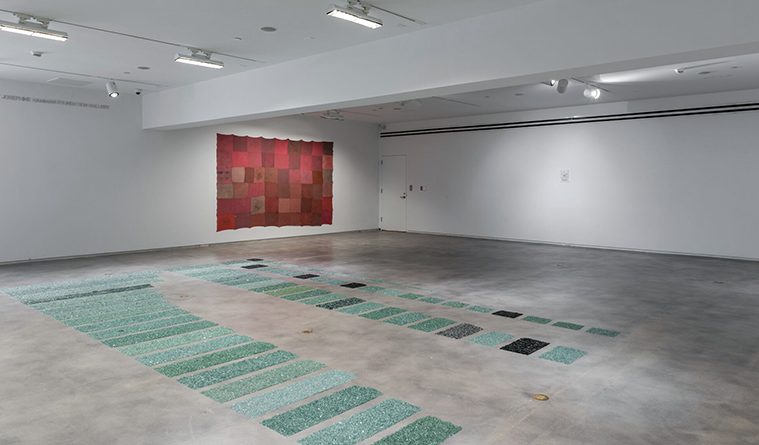 Everything Turns Away Quite Leisurely: Gabriel Martinez at Blaffer Art Museum

The cultural critic Michel de Certeau describes what he calls the Concept-city as an approach to the organization of urban space which views the city “from above,” from the heroic heights of an Icarus, a “scopic and gnostic” position from which the city might be seen in its totality and understood, predicted, organized, and mapped. The space below this totalizing image, this map of the city, is a messy one in which users (as opposed to consumers), bodies and materials traverse space laterally, following the lay of the land, encountering one another in strange and unpredictable or ungovernable ways.

In Everything Turns Away Quite Leisurely, on view upstairs at the Blaffer Art Museum through Jan. 27, Gabriel Martinez intervenes in or trespasses onto urban space and the rhetorical and material organizations, constructions, signs and strategies of significations which seek to make sense of and discipline the bodies and materials dispersed there.   Small blank white paper sculptures modeled after trash that Martinez has harvested from the street, put back there as ghosts of the trash now stripped of its branding; counterfeit local park signs named after political radicals, put up around the city to restructure public spaces; highway signs stripped of their coding, polished to mirrored steel, reduced to their fundamental signifier, the shield, in order to de-compose the strategies and military histories which organize our industrial centers. Martinez’s work highlights the discourses, textualities, signs and signifiers used in the production of space in our cities, the nomenclature of privileged figures and ideologies used to frame and fictionalize space and spatial histories, to extract an economics from the city, to impose an authoritarian ideal about human flourishing in what should ultimately be contested democratic spaces.

In the main gallery of the exhibition, Martinez’s poetic tactics and critique of spatial constructions culminates in a series of pieces that offer a deconstructed map, one which engages the dis-order and dis-integrations occurring beneath grids which are “mapped onto” the city. The centerpiece of the room is The Long Poem of Walking, a large-scale work comprised of shattered glass that Martinez has extracted from the street and arranged into a series of rectangles laid out according to volume, greatest to smallest, in a grid on the gallery floor. Strikingly beautiful, this detritus of urban space works as less an aesthetic repurposing of material or a metaphorical representation of violence, vandalism, etc., that takes place on the street, and more of a metonymical (part for the whole) tracking of material migrations and displacements through the city.

The glass is arranged in a way which refuses to represent, either in images or by way of mapping, demographic or didactic narratives about the city. The street names where the collections of shattered glass were found are displayed in large, white vinyl decals along one of the gallery walls. Easily missed, and necessarily viewed at a certain angle, the street names are detached from the glass, and recede instead into the white wall of the gallery, outsized and yet hidden linguistic markers. Martinez refuses to memorialize the violence or co-opt into easily readable narratives the trauma attached to a site, but instead offers the viewer an opportunity for a material engagement with the unseen trajectories of agents and objects moving through the streets of a boom and bust oil town like Houston with its newly minted slags of midrise apartment buildings restructuring neighborhoods, their economies and traffic patterns.

Migrations of value that wend their way through the city, constructing geological, industrial and urban space, are collaged into a high modernist grid in the piece Differential. A series of oil rags—the reddish-pink, gray, sometimes deep purple rags used at most gas stations and automotive repair shops—stitched together to form a large rectangle hung on the wall of the gallery, Differential references both modernist aesthetics as well as the traditions of quilt-making. The rags are stained with oil and petrochemicals extracted from the ground beneath our feet (the ground of the city that Martinez’s glass pieces makes newly visible), circulated from refineries to our cars, then wiped up as the waste, the excrescence of the mechanic’s labor. The rags imply unseen laboring bodies. Our own bodies are positioned by both the smell of the fluids still penetrating the surface of the rags, as well as the shards of glass on the floor, which still exists as a threat, a threat to the very body of the patron. The glass is sharp, one feels with one’s body the danger of leaping over it.

The shattered glass is the dis-integration of a claimed material totality, a threat to a master image of the city meant to ward off fear, the fear of the loss of an imagined wholeness rather than the violence of the production and distribution of materials and bodies through the constructed space of the city, the irruptions within contested urban space activated by a resisting body, the glass, harvested, gleaned, a reconstituted whole still glinting in its sharp edges.