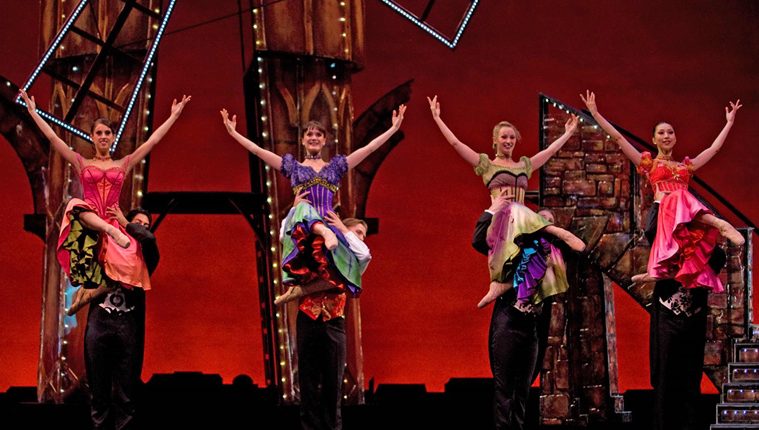 Fill Up Your Dance Card

A Virtual Feast of Out of Town Dance

WE ARE LUCKY TO HAVE SUCH a vibrant local dance scene, healing but it takes more than homegrown talent to build a dance city. Enter the out-of-towners, and fortunately for dance fans, the winter/ spring season offers a bounty of visiting dance companies. It took a savvy group of presenters and curators to bring this particular group of companies to town.

DiverseWorks is the city’s foremost presenter of edgy dance. Artistic director Sixto Wagan has a particular expertise for work that bleeds beyond the boundary of the proscenium. He found a perfect fit in Seattle-based Zoe Scofield and her artistic partner Juniper Shuey, know collectively as zoe|juniper.

“A Crack in Everything” is an installation and performance based on the Greek tragedy “The Oresteia,” opening on January 19, with performances January 19–21. Dominic Walsh Dance Theater will perform a version of the piece each Saturday through February 25.

“Zoe’s choreography is singular in its idiosyncratic approach to certain ballet traditions, which I thought would resonate well here — bringing together Houston’s contemporary dance audiences with the increasing appetite for contemporary ballet,” says Wagan. “‘A Crack in Everything’ pushes the boundaries of form, expectation and perspective. It’s re-interpreting the proscenium performance and creating an immersive experience for the audience, which will resonate both as a live performance and as an installation.”

DiverseWorks also premieres Ayman Harper’s “(theLID,” a collaboration with sound artists Matmos and Kidd Pivot’s Jermaine Spivey on January 13 & 14. Harper may hark from Clear Lake, but he has built his reputation abroad, dancing with the Forsythe Company and now based in Berlin. Harper has kept his Houston ties though, showing work with DWDT and at Barnevelder.

“DiverseWorks is excited to be part of an international co-commission of Ayman’s newest work, in part because we get to see how an HSPVA graduate has incorporated his experience with Hubbard Street and Forsythe to really develop his own artistic voice,” says Wagan. “We’re not just getting Ayman, but the incredible Jermaine Spivey, who dances with Kidd Pivot, and we get to bring his extraordinary musical collaborators Matmos to Houston for the first time.”

Dance audiences always look forward to what company Maxine Silberstein has selected for Dance Month at Jewish Community Center (JCC). This year’s it’s Andrea Miller’s Gallim Dance on February 11. Miller’s career has moved steadily upward since leaving Ensemble Batsheva Company. She’s performed at Jacob’s Pillow, graced the cover of Dance Magazine and shows no signs of slowing down. Her fresh voice has been in full evidence in the work I’ve seen at the Pillow and at The Juilliard School.

“I liked the fact that Andrea Miller was influenced by Ohad Naharin. We presented Ohad Naharin’s Dance Company when he had his own company in New York before he became the artistic director of Batsheva Dance Company in Israel,” says Silberstein, JCC’s dance director. “We were looking for companies that were smaller, newer and have not been presented in Houston, so Gallim fit the bill. She has a humorous as well as a serious side.”

Society for The Performing Arts

Getting the right company at the right time is never easy. “I saw excerpts from RWB’s “Cinderella” several years ago,” says Christensen. “I thought it was a beautiful company but the timing was not right for scheduling — then they planned to tour ‘Moulin Rouge’ in the 2011–12 season and it was perfect timing.”

Christensen marveled at Corella’s stage presence when he was here with American Ballet Theatre a few years ago. “There are those dancers that you just can’t take your eyes away from — even with a stage brimming full of fantastically talented dancers,” recalls Christensen. “I was following the opening of the Corella tour last year and, due to a last minute cancellation in my planning for 2012, the stars aligned in the touring world and made it possible to bring them to Houston. It was kismet.”

Houston has a long relationship with the Alvin Ailey American Dance Company, yet this is a historic visit; it will be the first time the company will be here with Robert Battle as the new artistic director. In addition to past Ailey shows, Houston dance audiences have seen Battle’s work on the Dance Salad bill and The Houston Metropolitan Dance Company. “SPA has been presenting the Ailey Company since the 80’s, long before I came on board at SPA.” says Christenson. “I think of Ailey as the best of the best and an institution of dance — everyone should see the company perform at least once, twice or as often as they come to Houston.”

Dance fans mark their calendars a year in advance for the annual festival, which always takes place over Easter weekend, this year on April 5–7.

Artistic director and founder Nancy Henderek has put Houston on the international dance map with her popular festival, which features up to nine dance companies. Henderek not only selects each piece of choreography, but works closely with the choreographer to choose the excerpt that will end up on the Festival stage.

“I proceeded to write out a map of the piece, starting from the beginning the end, making descriptive and timing notes of each section,” says Henderek. “After that, I look for how to weave certain sections together to make a shorter version that is basically never done this way.

This year Henderek is especially excited by Compagnie Pal Franak’s “Seven,” choreographed by Hungarian Pal Franak. “What I liked about this piece was the unique use of six tire tubes and how he used them,” says Henerek. “Sometimes set pieces can get in the way of the dancing, but a clever choreographer can make use of a set piece to make the dancers move in a very different way, which can create interesting movement.”

Broadway Across American presents Twyla Tharp’s “Come Fly Away,” at the Hobby Center, April 10–15. Tharp got her “Movin Out” groove back with this show. Set to Frank Sinatra songs, Tharp mines the wistful longing in old blues eyes’ voice with her outrageously athletic choreography. The crossover queen has a way of creating dance musical extravaganzas that appeal to both post modern dance lovers and Sinatra fans. The touring company features Cody Green, the break out star of TV reality show “Step it Up and Dance.”

It’s hard to discuss early music without dance, as at one time they were intertwined. So it makes perfect sense for Ars Lyrica to present the New York Baroque Dance Company (NYBDC) as part of their season closer, “Heaven and Hell,” on June 8. Directed by Catherine Turocy, NYBDC is an authentic experience that will take you back in time. Ars Lyrica artistic director Matthew Dirst has actually done a bit of baroque dancing. “I’ve known about Catherine’s work for years, since my own experience doing this stuff at the summer Baroque dance workshops at Stanford during my graduate work there,” says Dirst. “Plus, she lives in Dallas, so we’ve interacted in a number of different contexts since I came to Texas. It just requires calves of steel.”