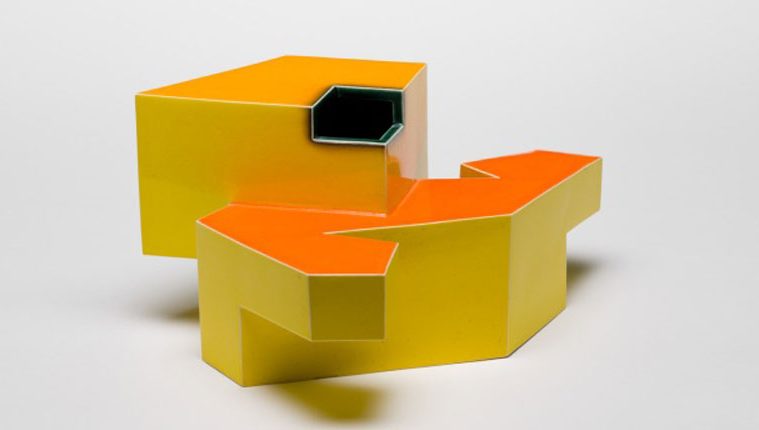 Nine hundred enthusiastic art lovers filled the Nasher Sculpture Center last week for a “grand” opening well worth the attention.  For many months to come, viagra buy visitors will be treated to Ken Price’s highly imaginative sculptures gracing the entrance and displayed in the first floor galleries and down the stairs in the gallery below. The Nasher’s distinctiveness in its devotion to present and collect modern and contemporary sculpture accounts for it being one of three museums in this country (and the only sculpture museum) to show this retrospective.

This exhibit of 100 pieces made by this artistic genius originated at the Los Angeles County Museum that published the catalog with original color reproductions; after Dallas it travels to the Metropolitan Museum. Sadly, Price died six months before this show opened on the West Coast. The celebrated architect Frank Gehry, a close friend of the artist, has stepped in to collaborate with the museums on the design for the installation.

“This brilliant exhibition demonstrates conclusively his position as one of the most important sculptors of the past half century,” stated Jeremy Strick, Director of the Nasher Sculpture Center. Price’s earned his reputation by elevating the traditional medium of clay out of the craft category to the level of serious sculpture and high art, inspiring a new generation of artists to question the boundaries and expand the possibilities of sculpture.

Price (1935 – 2012) predominately worked near the beach in Southern California. In the 50s he studied briefly under the originator of nonfunctional freely-formed ceramics, Peter Voulkos.  At the University of California in Berkeley Price received a BFA and later taught. The initial critical recognition of his original achievements began with shows in 1960 at the Ferus Gallery, the epicenter of Los Angeles’ “cool.”

Price liked to work in a series or groups of works. In the 60s his whimsical “snails” and “turtle cups” predominated; some were only six inches high. Stylistic terms like “geometric,” “mounds,”  “moon rocks” and “blobs” apply to the methods of creation. The object of his early experiments was to solve technical problems involved in making small scale abstract clay forms. In the 70s “Happy Curios” named in honor of his wife incorporated the landscape and architecture in New Mexico where they lived then. In the 80s Price began a process he continued to refine, sanding multiple layers of different colors, keeping a balance between form, surface and color. In works since 2010, scale was no longer controlled by the size of the kiln.

The works that finally put Price in a league of his own are the blob-like pieces he made in his final 15 years. Using up to 70 coats of paint, then distressed the surfaces by going at them with solvent and sandpaper, he created such luminous works that radiate with extraordinary colors.