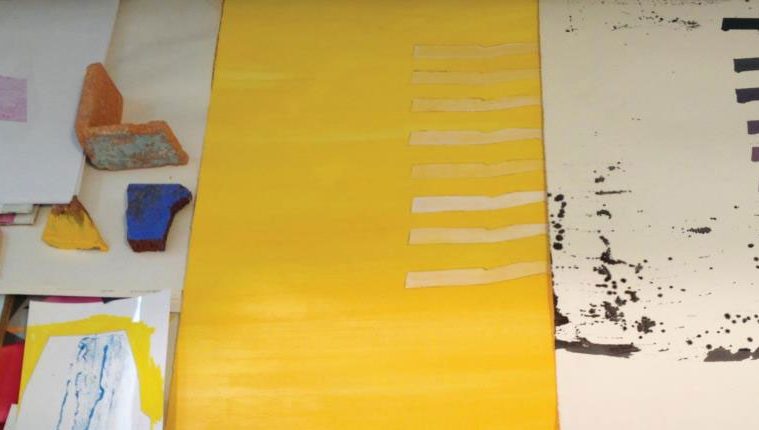 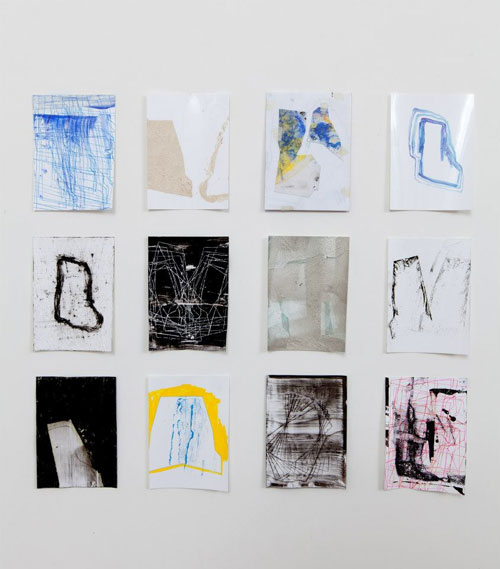 Works by Kristen Cochran at her recent show at RE gallery.

Kristen Cochran wants to speak in tongues. This might not be apparent at first, health but as you spend more time with her work you realize that she’s not merely experimenting with and synthesizing materials, she’s also intuiting a lexicon of private iconography.  Her latest show, “stutter slip stack,” at Wanda Dye’s RE gallery, offered an impressive selection of this process.

I was first exposed to Cochran’s sculptural works, works that seemed to investigate the space housing them as much as the materials and shapes out of which they were comprised. In certain ways her current exhibition title, “stutter slip stack,” indirectly alludes to this exploratory verve, this sense of works being worked and reworked right up until opening night. The difference here rests with this show consisting principally of works on paper. And yet they still convey the same restlessness and kinetic searching.

Stylistically these works display apparent variations, but they’re not essential. Such diversity doesn’t arise from eclecticism or a division of voice, rather from the search itself, from the process of experimenting with application, mark making, and above all else: using forms as language. This language doesn’t function as a proxy for ordinary communication; it wants to say something else, something unutterable. Cochran’s stuttering ought to read here as religious stammering, as glossolalia, as tongues — “but the spirit itself maketh intercession for us with groanings which cannot be uttered.” Stacking and stuttering, or repetitions at the intersection of the known and the unknown (perhaps the unknowable), in time develops into a language all its own. And being all its own implies that it has no referent within other tongues and thus awaits interpretation (a hyperbolic metaphor for reading whatsoever).

The slightly unorthodox hanging of the work contributes to its unconventional aim. Work in the front of the gallery hangs mainly in clusters; in the back pairings seem preferred. While not universally true of all the work in the show, you will find forms again and again taking centrality. The strongest pieces serve as meditations on both process and materials on one hand, and on what happens when certain forms — whether spontaneously intuited or discovered by happenstance — are repeated, slightly altered, or brought into relationship with foreign elements on the other. Cochran refers to these forms as symbolic characters called glyphs, which seems ideal given that the word reaches back to an ancient word meaning “to hollow out.” Here enters the slip of the stutter slip stack. 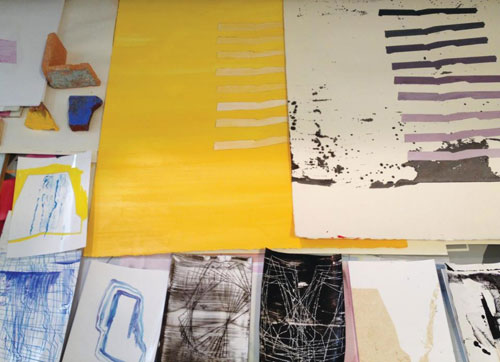 Works by Kristen Cochran at her recent show at RE gallery.

Language certainly brings us into the open of being, into the possibility of shared lives, of having a history and a future, of knowing, of communing. But words fail too, they slip off a little and misapprehension, confusion and discord happen. These unassuming little symbols we agree upon rest on nothing and are hollowed out. And yet they retain the very possibility of so much that is necessary to human life. For this reason it is not uncommon for artists to seek another grammar, to find a fashion of communing that doesn’t fail the way that ordinary language seems to. Consequently Cochran mines for a new lexicon of forms, glyphs that can be repeated and played upon to convey something that everyday words seem to her to be unable to do.

My criticism alternates at this point, as I cannot deny the inevitable failure and slippage of our hollowed out symbols — even the most successful and enduring ones. Add to this the private nature of a created or found language, of a language that is only one’s own, and the possibility of conveying something intelligible vanishes. Still, the desire to essay through art at all, however, grants Cochran a more flexible and receptive community. As strange tongues need interpreters, it seems beneficial that there remains a group of people — a cult of artists and cultural practitioners — generally interested in finding new and nuanced ways of understanding what visual works are saying and doing. In this way the artist’s paintings and sculptures and spatial explorations do what the very best art does: initiate critical and playful conversations. And it’s those interpretive and conjectural conversations that move her experimental stammerings toward the sort of unlikely communion with and between others that she so desires.