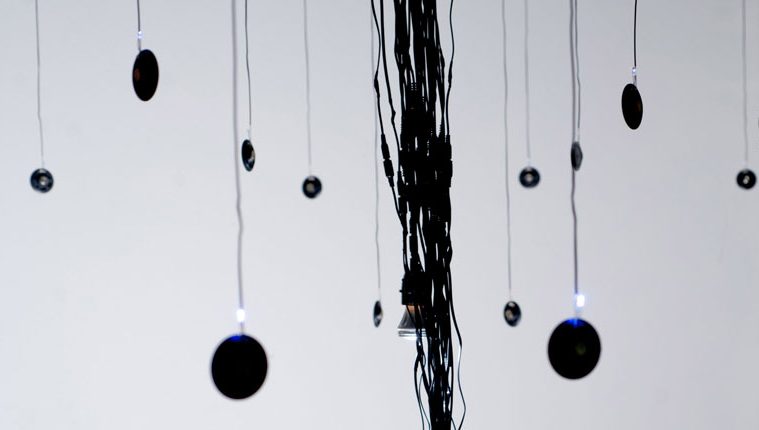 While some works are made with a wide audience in mind, salve others are addressed toward smaller communities, like fellow artists. And for both better and worse the content and presentation of Jason Flowers’ “Critique Machine,” in the Project Room at Conduit Gallery, certainly seems the latter.

Anyone who went through art school knows that the artist really learns how to see, think and talk about art in class critiques. The various surveys and seminars contribute to the artist’s education, but aside from the time an artist takes to make the work — that is, to learn the materials and techniques and to find a voice — it rests with critical examination and discussion to transition from artisan to artist. Such moments of interlocution place a demand upon an artist to articulate how they understand the work they make. An artist also learns how to critique the works of others, questioning formal decisions about the way the work actually looks and functions, as well as choices about subject matter and overall execution and relevance. And when an artist cannot well acquit his or her work it can get ugly. Further, after an artist leaves art school and group critiques behind they discover an even more uncomfortable and perplexing reality: art criticism.

One of the major concerns here, which Flowers highlights, is the confusion so often created by critique and criticism. Most artists desire a majority share of agency when it comes to deciding what their work conveys and how successful it is in any given consummation. But when artists think their work says one thing while a critic (or another artist) thinks the work says something else, a contradiction arises. And if another critic (or another artist) says yet something else, thus adding to the conflicting interpretations, the situation worsens and the confusion increases. And the state of perplexity deepens as more voices and interpretations are added to the dialogue. How ought an artist respond to rivalrous views? Flowers opts for satirization.

In the Project Room at Conduit, Flowers suspends an array of small speakers playing various sounds that, as one walks about the small space, give the impression of unintelligibility. The intent is clear enough: critique and criticism very easily amount to nonsense. Fair enough. Still, while witty and effective as a reverse critique of critique itself, in its substance and arrangement it is a work only other artists and cultural devotees can truly appreciate. And to be evenhanded, it has always been easier to resist and ridicule the critics and their critiques — the ones tasked with opening works up to inspection and wider appreciation — than it has been to merely ignore them if they are wrong.