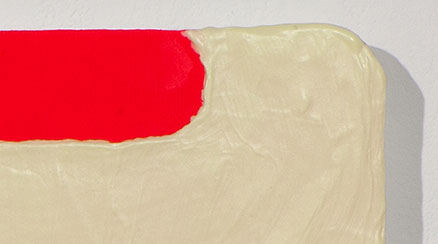 Every once and awhile you have to get a little outrageous. Tone down the seriousness, find take a break from the theoretical, throw back a few beers and just let things be awesome… like an awful 80s movie kind of awesome. This is exactly the kind of excess Kevin Todora and friends have served up at UT Dallas with “Maximum Overdrive.”

When Todora was thinking about a theme for the show and who to invite to participate, he realized that he didn’t want to do anything fussy or pretentious, rather something fun and a bit different, as well as something that pushed the usual responsibilities of a curator. He decided that Stephen King’s utterly horrible and spectacular directorial debut, “Maximum Overdrive,” possessed the thematic tone he desired. Taking his cue from the movie, Todora wondered if an apocalypse did actually come — be it machine, zombie, alien, whatever — and you were going to have to survive in a gas station with a group of people, who would you choose? And what if the gas station turned out to be an art gallery and the group of people nine artists? With these questions in mind, personalities and sensibilities played as much of a role in inviting artists as did the type of works they make.

As you can imagine, the work varies, yet it’s apparent that Todora brought together a group of artists capable of both understanding and sharing his lack of aesthetic moderation and his love of the excessively questionable. And while some go all out, others play between the two poles. Gregory Ruppe’s video, “Prepared piano,” for example, makes you wait — but not too long — to be rewarded by an act of humorous destruction. John Dickinson took some old T-Shirts commemorating the Patriots’ perfect 19-0 season, which culminated with a win over the Giants in Super Bowl XLII, and had their graphics etched onto glass disks, thus moving the everyday appreciation for the spectacular (T-Shirts) toward a selective commemoration of the common (etched glass); and in case you don’t follow football, the Giants beat the Pats in the Super Bowl, thus there never was a perfect season. And perhaps the piece most perfectly suited to the theme is M’s installation, the title of which is too long to list here (another reason it’s on target), comprised of bull horns, a Casio MT-45, notebook paper, and a hotdog loaded with ketchup.

In addition to the work, there was local beer at the opening and some deviled eggs — things Todora was glad to point out because they showed his curatorial interest didn’t stop with the art, but extended into auxiliary experiences as well. On top of that, he hired an Andy Warhol impersonator to attend the opening. You’d find him studying the work, taking pictures of people, grabbing a chair and sitting in the middle of the gallery. And he never broke character. It was all so absolutely “Maximum Overdrive.”