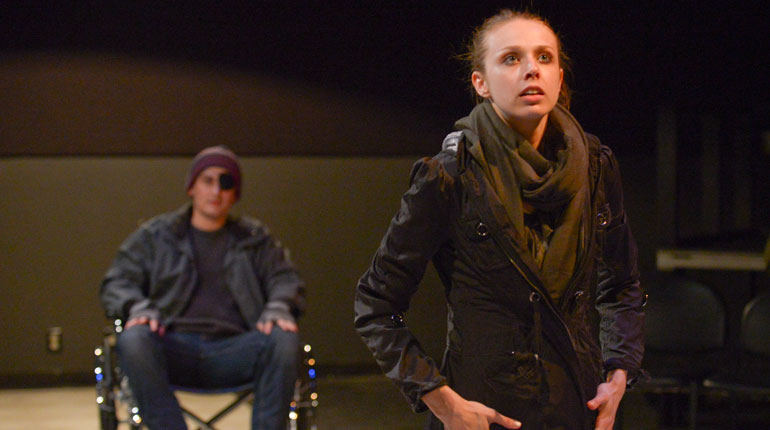 Romeo and Juliet have nothing on the often funny, possibly tragic, and always gripping, tale of Kayleen and Doug. They’ve suffered life’s slings and arrows, its heartbreaks, its electrocutions, and its blunt force traumas. Now, about to hit 40 and no more certain than ever of their place in the world, they spin the yarn of two lives that began with a meeting in a school nurse’s office, and crisscrosses through decades of injuries and mental illness.

It’s a web of emotions not lost on Joel Ferrell, who directs Gruesome Playground Injuries for Second Thought Theatre, opening June 6 at Bryant Hall on the Kalita Humphreys campus in uptown Dallas.

“I have had a number of relationships that really were cemented at moments of great pain or trauma,” said Ferrell, Dallas Theater Center Associate Artistic Director. “But most importantly, these two characters know each other for years and years, even though they are not around each other all the time. They have serious history. I think we all have someone we will always feel weirdly connected to because of some childhood trauma or incident.”

We see Doug and Kayleen at various points in their lives, flashing back and forth in time, from ages 8 to 35. It’s a story about the wounds we collect over time, both interior and exterior. And how the pain we’re forced to endure either tears us apart from the ones we love, or drives us closer together. And sometimes, pain can show a funny side.

“It’s definitely a dark comedy,” said Steven Walters, co-artistic director of STT. “It’s simultaneously hilarious and tragic. But that’s just like life, I guess. And I suppose that’s why the story is so compelling. Gruesome is hilarious because it’s speaking to a larger truth. We can recognize it. The play touches on something so incredibly human, and so universal, it strikes you to the core. Sometimes with profound sadness, other times with gut-busting laugh lines. It’s a roller-coaster in the best possible way.”

The play originally debuted in Houston in 2009, but has been produced nationwide, including New York City, where it received generally favorable notices. Joseph said he got the idea for the script after a casual conversation with an old friend who began telling him about all the terrible and insane injuries he’d endured over the course of his life – as if time markers in life.

“Rajiv Joseph has an astonishing ability to write about damaged people in a constant state of turmoil succinctly and directly,” said Ferrell. “This makes his characters approachable and familiar.”

Walters thinks the connection is easy for audiences, as it was for him when he first read the script.

“We all have someone in our lives who we deeply love who, at the end of the day, might be bad for us. But because of some inexplicable bond, we can’t sever ties, no matter how hard we try. Plus, we’ve all been hurt, physically and emotionally. I broke my arm when I was six. And I think the only pain I can remember that badly was the first time I lost a close friend. My broken arm healed, but the pain that derives from the loss of human connectivity, and the damage we inflict on ourselves and onto other people throughout our lives, that kind of pain has a way of sticking around. I guess that’s the part of this play that speaks to me the most.”

Joseph has plenty of cred in his relatively short career. His Bengal Tiger at the Baghdad Zoo was a 2010 Pulitzer Prize finalist for drama and was awarded a grant for Outstanding New American Play by the National Endowment for the Arts. He penned Gruesome as his follow-up production, although his latest is a new musical based on the story of Peter Pan, which Dallas Theater Center is mounting as their big summer production.

“(Dallas Theater Center Artistic Director) Kevin Moriarty approached me last year about doing a Rajiv Joseph play around the same time as DTC’s production of Fly, which Rajiv penned,” said Walters about his decision to produce Gruesome Playground Injuries at Second Thought Theatre. “The play had already been on my radar for a couple of years; I just hadn’t found the right director yet. Luckily, Joel was sitting in the room when I met with Kevin. Once I knew Joel was on board, it was a no-brainer.”