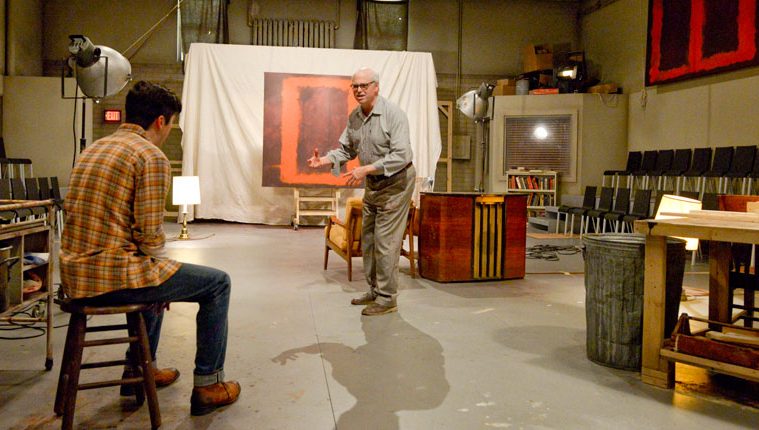 It is 1958 and New York City is on the rise, literally and figuratively. With the influx of immigrants at the turn of the last century and the subsequent wave of artists and architects fleeing Nazi-occupied Europe, the cultural quotient of the city erupted exponentially. Mark Rothko belonged to this post-war generation of artists. He not only helped establish New York as the center of the art world but was also a founding father of Abstract Expressionism. And it is in this year that he received his monumental commission for the Four Seasons restaurant murals in the newly completed Seagram Building on Park Avenue, designed by Philip Johnson and Mies van der Rohe.

Rothko arrived in America from Russia in 1913, at the age of 10. He attended Yale on a full scholarship from 1921-23. He left New Haven for New York in 1923 where he eventually enrolled at the Art Students League. During the rest of this decade and the next, Rothko’s work tended towards Surrealism while at the same time his figures became increasingly abstracted.

“In the early 1940s, he was responding to what he was seeing. In the late ’40s, he began to develop his floating rectangles, his classic style,” says Carol Mancusi-Ungaro, Director of Conservation at the Whitney Museum of American Art. While Rothko’s early works had their roots in classical mythology, primitive art, and, though he was Jewish, Christian iconography, these large planes of color took their inspiration from the golden light and jewel tones of the 16th century Venetian painters. Before long, he had the attention of critics and patrons alike, which brings us to the Seagram building.

“He was moving to a large scale with murals so that was a wonderful opportunity,” Mancusi-Ungaro says of the commission Rothko received to paint seven panels. It was a lucrative commission, consuming him between 1958-59 and led him to paint over 30 canvases.

As Rothko worked through the commission, the work evolved. His floating rectangles were replaced with luminous, frame-like red, black, or brown “portals” suspended over maroon or brown backgrounds. According to Mancusi-Ungaro, having a commission for a specific space is an enormous opportunity for an artist, especially since he knew the physical aspects of where the work would be placed.

Increasingly unhappy that only wealthy patrons would see this work, Rothko withdrew the commission, returning the payment he had received for it. These panels are now scattered between the National Gallery of Art in Washington, D.C., the Tate Modern in London, and the Kawamura Memorial Museum in Sakura, Japan.

John Logan’s acclaimed play, Red, deals with Rothko’s conflict over this commission and his relationship with his fictional assistant, Ken. The Dallas Theater Center is currently staging its production at the Dee and Charles Wyly Theatre. But before the curtain rose, as it were, the cast and crew spent a good deal of time at the Dallas Museum of Art working hard to get Rothko right. It is a collaboration that continues to blossom.

Carolyn Bess, Director of Programming and Arts & Letters Live at the DMA, recounts that Director Joel Ferrell and Scenic Designer Bob Lavalle initially came to the DMA to immerse themselves in all things Rothko, from what his studio looked like to the kinds of cigarettes he smoked.

For one of their first programs of the season, Arts & Letters brought together Mancusi-Ungaro; Maxwell Anderson, the Eugene McDermott Director of the Dallas Museum of Art; with Ferrell and his cast, Kieran Connolly and Jordan Brodess, for a public discourse on Rothko’s process and persona. While Mancusi-Ungaro was in town, the majority of the DTC staff, from the production team to the accounting department, streamed down Flora Street to attend the workshop she prepared for them. She spent an hour discussing Rothko’s career and giving them background on his materials and techniques.

“We sat in front of Rothko’s ‘Orange, Red and Red’ for 30 minutes. We wanted people to process their reactions and then we had everyone share their reflections,” Bess said. “What changed our perceptions was talking to people who know something about how the paintings were done. It was a physical experience as well as a cerebral one,” Ferrell added.

Now that the show is open, the dialogue continues. The Museum has installed Rothko’s 1962 painting “Orange, Red and Red” in the South Concourse. They have redone their online teaching materials and the staff of the Center for Creative Connections has, according to Bess, “developed wonderful activities that will change every week.” Also installed in the C3 is a continuous screening of Rothko’s Rooms, featuring interviews with Rothko’s children, Kate and Christopher. And that is just at the Museum. “Five DMA staff members are giving DTC Come Early Talks prior to Red,” Bess said. It is a collaborative effort lauded by both organizations.

In the years between the Seagram murals and his suicide in 1970, Rothko created some of his most memorable work, including two more large-scale commissions: five murals for the Holyoke Center at Harvard University (1962) and 14 paintings for the Rothko Chapel in Houston (1964-67). Of these three commissions, only the Rothko Chapel remains extant.

The paintings in the Rothko Chapel are significantly darker, an indicator that critics often cite as Rothko’s increasing depression. But according to Mancusi-Ungaro, this is an assumption that needs to be re-examined. Since doing conservation work on them, beginning in 1979, she says this work is more about light reflecting off the surface. Since she has had the opportunity to examine the work intensely, she says, “It was through that treatment that I began to understand reflectance in Rothko’s work,” adding, “The paintings themselves defy the myth” about his depression and suicide, especially since work that came after is of a much lighter palette.

“His lasting effect is that his paintings seem to resonate with people today. They draw us out of ourselves,” says Mancusi-Ungaro. The renewed enthusiasm shown for Rothko’s work by a new generation is testament to the power of these ethereal paintings. And as for the DMA/DTC collaboration, Ferrell sums it up best, “The DMA taught me how to be brave and ask questions about modern art.”

Red, Dee and Charles Wyly Theatre
in collaboration with the Dallas Museum of Art
Continues through March 24, 2013