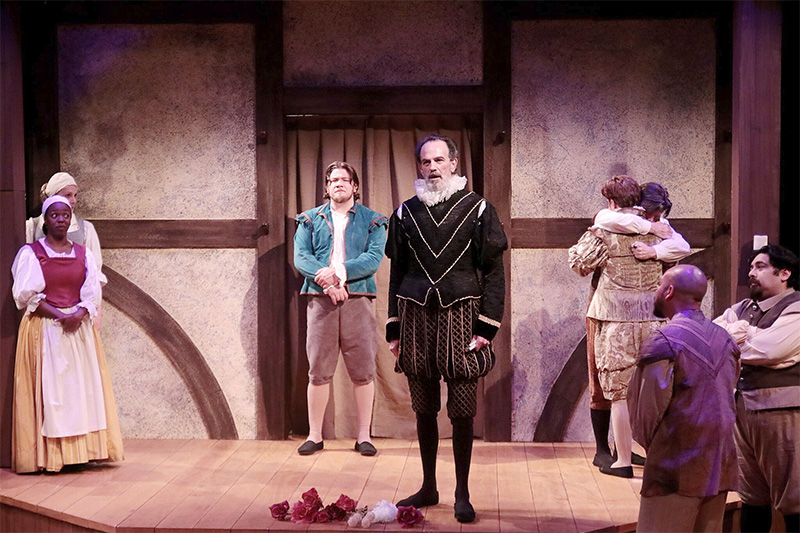 Friendship, Rivalries and Lots of Ale: ‘Book of Will’ at Main Street Theater

Will Shakspere, actor, theater owner and writer is dead; long live–for 400 years–William Shakespeare. How a mere playwright of pop (Elizabethan and Jacobean) culture stage hits became an immortal literary demigod is a tale told with very little sound and fury, but signifying the world, or at least the globe, in Lauren Gunderson’s lovely-melancholy comedy, The Book of Will.

Death permeates every scene and line in this Main Street Theater season opener (through Oct. 21), but mortality intertwines with hope, as director Rebecca Greene Udden and a cast of Houston favorites project a light and keep the lightness of this story of love, friendship, rivalries and lots of ale.

With the Bard’s death, his words began to fade. In London, a bunch of upstart actors working from hackneyed scripts performed warped imitations of his work. Only the Globe Theatre remained, still peopled with actors who remember the real Shakespeare and use original texts of his plays, or at least some of them.

With Shakespeare’s contemporaries slowly following him into the grave, Will’s friends and theatrical partners John Heminges (Joel Sandel) and Henry Condell (Dwight Clark) set out to save the true plays. How a bunch of actors, theater insiders and one unscrupulous publishing company managed to bring Shakespeare’s First Folio, the first printed collection of Shakespeare’s plays, into the world might seem like dry material for academic papers. Yet, Gunderson, a youngish-pro at bringing historical imaginings and re-imaginings to stage, imbues the legalese of 17th century publishing practices with real suspense.

But the will-they-or-won’t-they-publish plot never eclipses the real star of the show, a meditation on how storytelling and the illusionary world of theater makes the tragedy of just being (and dying) human a little more bearable. Udden’s direction of some outstanding, yet quiet, scenes from Sandel and Condell depict the pain of time’s bleeding of us all, sometimes healed by the deep balm and solace of art.

Since this is a Gunderson play, women have a voice and have their say throughout the story as well, with Heminges’s wife Rebecca (Ivy Castle Simpson) and daughter Alice (Brittny Bush) and Condell’s wife Elizabeth (Elizabeth Marshall Black) acting as three good witches of literary history. Inspiring and pragmatically prodding the men, they get shit done. Gunderson’s sensibility and the actresses’ skills at bringing nuance to their roles keep these wives and daughter, mostly lost to recorded history, from becoming mere muses. While they urge the reluctant and occasionally defeatist men to greatness, they become pretty great themselves.

Most of the rest of the cast do well taking on two or three roles. Rutherford Cravens sets the comic scene as the boisterous actor Richard Burbage and then plays the villain of the piece as publisher William Jaggard. Son Isaac Jaggard’s (Blake Alexander Weir) entrance into the story adds a nice Shakespearean father/son relationship to mirror the equally Shakespearean John and Alice father/daughter relationship. Gunderson also gives editors their due, making Ralph Crane (Brandon Balque in fine harried form)–labeled by scholars as the first Shakespeare editor – into a kind of genius Shakespeare fanboy.

John Feltch as Shakespeare’s frenemy, the perpetually inebriated Ben Jonson, manages to drunk-walk away with every scene he’s in. And Black should win some kind of best acting while-wearing-a-dead-octopus-on-one’s-head award for the wig she endures later in the play as Will’s dark lady of sonnet lore. Together, this crew of rogues and peasant slaves, a.k.a theater and publishing people, save Shakespeare and perhaps western literature for the future.

The characters and show do lose a bit of forward motion midway, though, and some of that poignant meditation becomes artful dilly dallying, but for Shakespeare lovers, this Book will likely be a treat. And for those who don’t know their Pericles from their Timon of Athens, Book of Will still offers a comic take on the length friends will go for each other,  especially when inspired by poetic theater and fueled with a few tankards of beer.