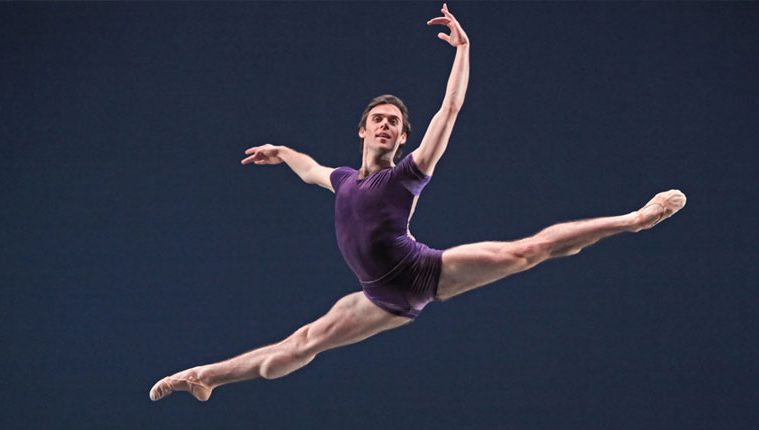 Blade-like limbs sliced through the air exactly in unison, mastering the fierce architecture of Aszure Barton’s Angular Momentum. The stage was jam-packed with dancers, blazing white lights and a striking linear set, yet Joseph and Connor Walsh’s brief but affecting duet galvanized our attention. The audience got a double dose of Houston Ballet’s talented team as both dancers moved with uncommon grace and power, adding a layer of pristine clarity to top off the wonder.

In many ways, Joseph and Connor epitomize today’s male ballet dancer, equally comfortable in classical and contemporary work, malleable enough to serve as the ideal raw material for a choreographer’s vivid imagination, which is exactly why they looked so at home in Barton’s highly idiosyncratic universe.

“Aren’t those Walsh brothers amazing?” a friend asked in passing. “Yes, they are amazing, but they are not brothers,” I replied. Joseph and Walsh not only share the same last name, but a similarly-rapid trajectory at Houston Ballet. Artistic director Stanton Welch is known for letting dancers define themselves through challenge, which is exactly what has happened for these two Houston Ballet principals. When either one of them is on stage, it’s a “look here” moment. Together, it’s a double dose of rocket fuel.

“Don’t forget William Forsythe’s The Vertiginous Thrill of Exactitude; we have a short duet in that piece too,” Joseph reminds me. “And then there’s another one in Stanton’s Falling and Christopher Wheeldon’s Rush,” adds Connor. “It’s great because I’m a lefty and he’s a righty when it comes to turns. We mirror each other well.” The camaraderie in the room is palpable; It’s evident that there’s a reason these two enjoy dancing together. They may not be biological brothers, but brotherhood is in the picture in the way they support and encourage each other. “I’ve learned so much from Connor, the way he conducts himself in rehearsal, the easy way he has goes about things,” says Joseph.  “He’s given me great feedback and has set a fine example – plus, with little or no drama.”

Both trained at Houston Ballet’s Ben Stevenson Academy, so they are homegrown talent, as we say in the ballet biz. Promotions came quickly: There was no dillydallying in the corps for these two. Opportunities early on gave them a chance to shine and strut their virtuosic stuff. They both possess clean, sleek lines, razor sharp technique and princely good looks, the trio of qualities one needs to succeed in ballet.

Connor arrived on Texas shores at age 15, fresh out of the Kirov School. Ballet master Claudio Munoz proved one the reasons for the move to Houston Ballet: “Claudio pushed me to a new level. They worked me from nine to nine; I started with the big boys and ended with the little guys,” Connor recalls. “It was also the first time I was at a school with a real company attached. That’s when I figured out that this is what I want to do.”  By the time he was 18, he had a contract in his hands.

Connor’s first year had its ups and downs. “I spent half the year injured,” he says. “I was frustrated and felt pressure since I skipped the apprentice stage.” He made his mark during his second year. The company was in flux, with older dancers leaving or getting injured. “I wasn’t focused on promotion; I was just trying not to screw up,” quips Connor. Opportunities opened up and Connor was there to conquer them. He was promoted to soloist in 2006 and principal in 2007, following a performance of The Merry Widow.

While still a senior at Walnut Hill School, Joseph came across a story about Connor and Bridgett Zehr’s promotions. “That was the first time Houston Ballet came on my radar,” recalls Walsh. “I thought, wow, this looks like a cool place.”  After attending Houston Ballet’s summer intensive at 17, Joseph was considering his many options when an offer arrived to be in the renowned training troupe, Houston Ballet II. “I remember getting my schedule with company rehearsals on in it, and thinking, whoa, this is scary.” Big opportunities arrived right away, from Lensky in John Cranko’s Onegin to Des Grieux in Kenneth MacMillan’s Manon. Joseph was promoted to soloist in 2010, and principal in 2012 after his performance in Cinderella.

Lensky proved to be the break-out role from the corps for both dancers. The similarities didn’t end there. Weather was involved. Connor performed the role during Hurricane Rita, while Joseph got his Lensky moment during Hurricane Ike.

Being cast as Des Grieux in Manon while still in the core proved a personal milestone for Joseph. “Manon happened at an extremely transitional time for me,” he recalls. “When the casting first went up and I knew I would be dancing the principal role, I was so excited. Then we started rehearsing and I was absolutely terrified. By the premiere, it was the perfect mixture of both. Throughout the rehearsal process I realized what it meant to be trusted with such an incredible role while in the corps.”

More big roles are on the immediate horizon for both dancers as they prepare to dive into the epic detail of one of ballet’s most beloved warhorse ballets.  Connor gets a second chance at Solar in Welch’s ravishing update of La Bayadère. It’s a role he cherished learning the first time around, and can’t wait to sink his teeth back into the role’s many challenges. “There are some hefty techniques in terms of jumping and turning. It’s brutal in a good way. Ice buckets are involved,” says Connor. “Solar is such a masculine role: He’s a hunter and a warrior. Plus, I get to kill a tiger. How much fun is that?”

This will be Joseph’s first go at Solar. “It’s exciting and so different than the princely roles,” he says. “The acting is so projected forward rather than in the choreography.”

After La Bayadère, they change gears completely for Welch’s new The Rites of Spring and more contemporary challenges.

A company is a social unit that moves according to the rules that allow success to flourish. Mentorship, camaraderie and learning from each other’s triumphs and mistakes all factor into a company’s success. When this spirit is modeled at the top, good things can and do happen.

The pair have a lot of dancing yet to do as both have another chapter of their careers ahead of them once they emerge from their boy wonder twenties.

Connor, who has been with the company longer, has seen the institution evolve. He’s ready for the new crop. “We are becoming a young company. It’s great to feel the pressure of younger dancers coming up on our heels. It’s been refreshing to have Joe by my side. We are in this together.”