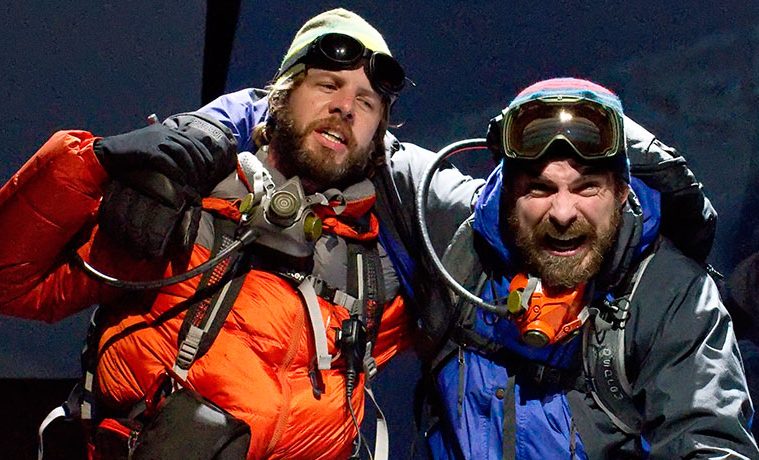 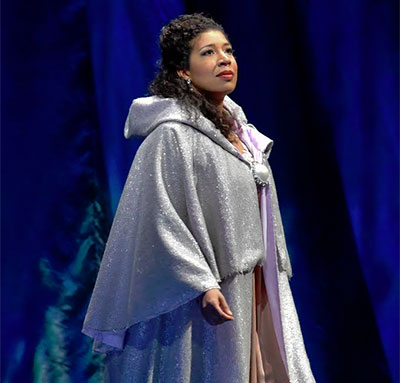 Opera’s power has always been in its ability to reduce complex situations or big themes, if you will, to their most simplistic and as if by magic, amplify our response using the most potent emotional trigger available. Music.

The Dallas Opera’s current dual productions of the fourth act of Alfredo Catalini’s La Wally and the world premiere of Joby Talbot and Gene Scheer’s Everest stand as powerful testament to that fact.

Commissioned by the Dallas Opera, Everest is a one-act opera which artistically retells a story familiar to most thanks to John Krakauer’s Into Thin Air, Krakauer’s first-hand account of the 1996 Everest blizzard which took the lives of eight people.

Everest describes two stories, moving back and forth between them. The first focuses on Rob Hall and Doug Hansen, Hall being the celebrated climber who served as guide to a group of eight climbers and personally assisted Hansen in what we now know was an ill-fated decision to conquer the summit. The second parallel storyline is that of Beck Weathers, who Hall asks to wait for him at 27,000 feet after he loses his sight, miraculously surviving after spending an unprotected night on the slope.

A quick word on La Wally before we dive into Everest. Catalini’s La Wally is a rarely performed gorgeous, romantic opera with one of history’s great arias opening the fourth act. During the opening night performance the roles of Wally and Giuseppe, her lover, were sung capably, if a tad uninspired, by Mary Elizabeth Williams in a Dallas Opera debut and Rodrigo Garciarroyo respectably. Notably Garciarroyo replaced tenor Carl Tanner after Tanner withdrew from the production due to illness. 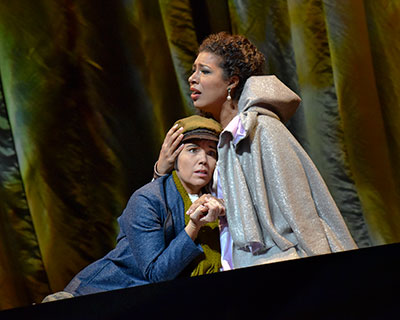 I understand the thematic connection; Wally escapes to the wintry mountains after romantic drama which includes an arranged marriage and unrequited love. Giuseppe pursues and the lovers are united only briefly before an avalanche sweeps Giuseppe away. I also understand the Dallas Opera’s commitment to the classics and the conservatism of their audience. It seemed, however, a dramatic distraction from what should have been far and away the focal point of the evening; a Dallas Opera commissioned and staged world premiere.

I’m sure another factor which precipitated the inclusion of La Wally’s fourth act in this production was due to Everest’s brevity, the show clocks in at barely 70 minutes.

Robert Brill’s sets and Elaine J. McCarthy’s projections transport the audience to a geometrically abstract Everest, massive cubes stacked haphazardly serve to visually signify the steep heights, and deep crevasses of Everest, making its trespassers look oh so very small. In tandem, McCarthy’s beautiful projections work to transform the white boxes into the heights above the clouds, and the deep darkness of night in turn.

The stage is great, and I in no way denigrate its artists when I say the performers in this opera could have been standing on an empty stage and it wouldn’t have mattered. The music is brilliant, both musically and lyrically.

Hats off to Talbot and Scheer for succeeding in making a 21st century opera chorus not only a vibrant, but an integral part of the story. They’re responsible for Scheer’s most poetic lines; carrying the immediate action to metaphysical heights with their in turns whispered and implored questions and reminders, “How many steps will you take in your life?” 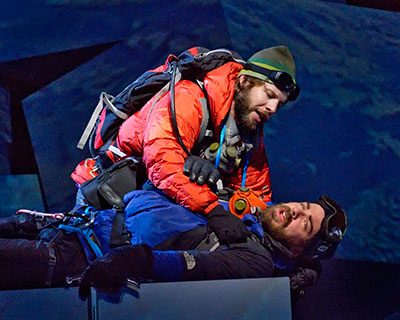 They also help viewers navigate between the climbers and their families back home. As mentioned, the story bounces between Hansen (Craig Verm) and Hall (Andrew Bidlack) stranded at the summit, and Weathers (Kevin Burdette), who lies, floating in and out of consciousness, several thousand feet below. Hall and Weathers both play host to dreamlike conversations with their families, in the case of Hall, he remembers (and at one point actually speaks to) his pregnant wife (Sasha Cooke), and for Weathers, it was his daughter (Julia Rose Arduino).

Of note, Scheer spent months speaking personally with survivors of the Everest accident, so while much of the dialogue is imaginative, as art should be, some of the conversations are culled directly from interviews.

Talbot’s music is of the 21st century and for the 21st century explicitly, filled with nods to the great minimalists that so transformed what we feel “classical” music should be, dramatic repetition and silence included, but with bursts throughout of unashamed dramatism. He inventively uses both electronic and acoustic instrumentation to recreate the frequency of the radio, or the winds of the summit. One of the highlights was the duet between Bidlack’s gorgeous tenor and Cooke. Taking place before Hall knows his fate for certain, it’s hopeful and big in a way most of the opera is not, to its credit.

Everest is an opera for the 21st century ear and audience but its themes resonate throughout the history of the art form, after all, what could be more universally heartbreaking than a husband realizing he’ll never see his son, or a father fighting his way from death thinking only of seeing his daughter one more time?

Sure it’s reductive, opera has to be, but when the music and poetry are this good, therein lies its power.