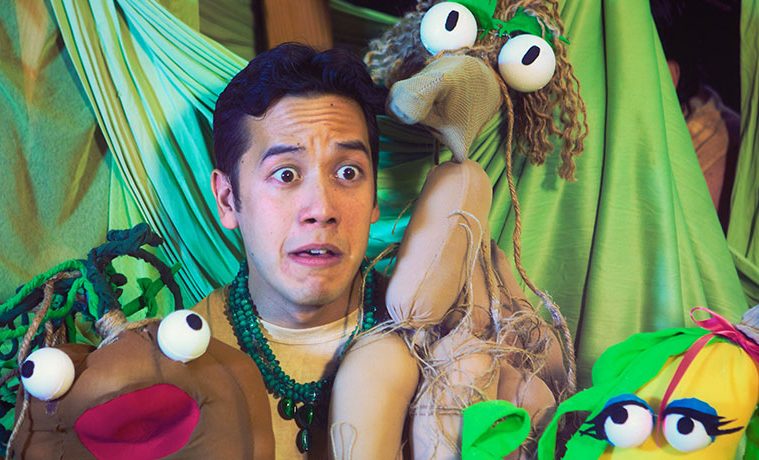 IMAGE ABOVE: Ricco Fajardo as Aki in the Cara Mia production of The Magic Rainforest. Photo by Adolfo Cantú Villarreal. 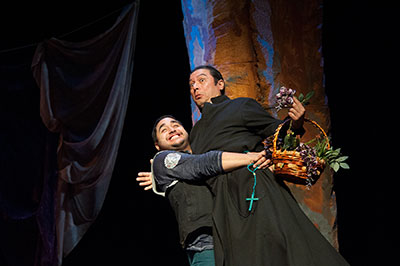 “There is always untapped creativity,” states David Lozano, Cara Mia’s Artistic Director, giving voice to an observation that is unfortunately all too true. But while most theater companies only wish they could utilize the untapped creativity they know lurks just outside their doors, Cara Mia Theater Co. actually does.

Their recent production of  The Magic Rainforest: An Amazon Journey is a good example. The play, which runs through June 8, is guest directed by Prism Co.’s Jeff Colangelo and features performances from many guest actors, some Southern Methodist University students, as well as the talents of various contributors who designed vibrant sets, puppets, costumes and more.

Over the last decade, Cara Mia has come into its own, building a robust staff and ensemble and assembling a roster of collaborators, both formal and informal who together populate a network which has helped to greatly expand the company’s audience base.

Cara Mia Theatre Co. dates back to 1996, when the company was founded as the first Chicano theater company in Dallas. The term Chicano specifically refers to the group of Mexican-Americans who choose to identify with, and celebrate their Mexican heritage.

In the early years of Cara Mia, the bilingual company stuck to the works of Chicano playwrights and focused on a canon of work that functioned as social critique as much as art, always keeping the Mexican-American experience at the core of their practice. The company filled a gaping hole in the Dallas theater scene as the Mexican and Mexican-American population continued to grow while their representation on area stages remained stagnant. 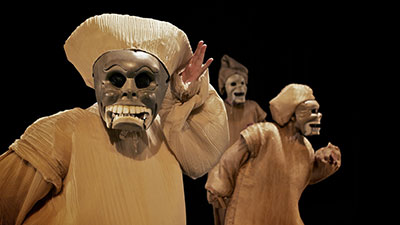 As the Dallas Latino population diversified (and Dallas theaters were no longer able to ignore the presence of the actors that came along with them) Cara Mia Theatre Co. diversified alongside them. With a growing pool of audience members and artists in Dallas from throughout Latin and South America from which they could draw, Cara Mia began producing a larger variety of plays focusing on the language, culture and history that was shared amongst Dallas’ diverse Latino population.

Although there have been some creative lapses in Cara Mia’s history, Lozano marks 2008-2009 as the years in which the company came into its own. That season saw the introduction of more professional design elements, sets, costumes, etc., and the creation of a resident ensemble.  The work of the pool of Latino playwrights from which Cara Mia could draw was also evolving, the strict social content of previous authors was diversifying, and Chicano and Latino playwrights were writing work that incorporated literary overtones in addition to social critique.

It is in the last five years however that Cara Mia has truly become a professional theater company, one that competes for audiences with the rest of Dallas’ vibrant professional theater community and it’s probably not a stretch to assert Lozano’s unique approach to creation as responsible in no small part for the company’s recent success.

Lozano has the mark of a great creator. “I’m collaborative to a fault,” he’s quick to admit, “I always want to know what I’m missing.”  That pervasive curiosity, and the surprising amount of trust he places in a roster of young artists, many of whom he has met through Southern Methodist University’s theater program with the help of former Meadows School of the Arts Dean Jose Bowen, have pushed Cara Mia in surprising directions and help to ensure the company continues to push boundaries and evolve. 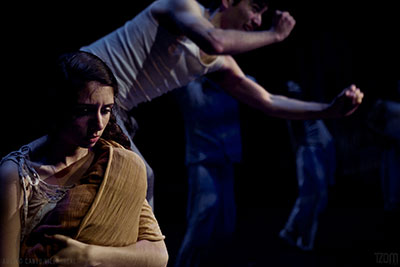 Formal partnerships have also resulted from Lozano’s penchant for collaboration.

One of Cara Mia’s initial partnerships was with the Dallas Children’s Theater. Two years ago Robyn Flatt, the theater’s Executive Artistic Director, invited the Cara Mia ensemble to workshop the development of a new script called Mariachi Girl by Roxanne Shroeder Arce. After a period of development and workshopping, Lozano served as consulting director for the Dallas premiere last month.

Over the past several years Lozano and his team have also been working on a trilogy of plays on immigration. The first installment was The Dreamers: A Bloodline, which Cara Mia’s artistic ensemble created and staged together. The working title for the second installment is The Dreamers: Deferred Action, an especially important collaboration for Cara Mia as it marks the first phase of what will hopefully evolve into a long and healthy relationship with the Dallas Theater Center (DTC).

Although performing without a permanent home, Cara Mia currently stages their productions in the Latino Cultural Center’s performance hall, the company’s lofty goals seem to serve as an abstract form of assurance that the group is poised for success.

According to Lozano the company’s strategic goal sees Cara Mia going from its status as a small company to a mid-sized artistic institution with an annual operating budget of $250,000. Put another way, “We want to be an artistic institution such that when people think of Dallas theater, they think of Cara Mia,” he says, and “We feel we have a group of artists, the goodwill and the imagination to make that happen.”

Director of New Play Development at DTC Lee Trull, who is co-writing Dreamers:Deferred with Lozano, seems to agree, “Cara Mia is a brave and curious company,” says Trull, “They steal from wide ranging influences and bend them into something new. It’ll be interesting to see if they keep their edge, their sense of play, as they get bigger. My guess is that they will continue to evolve into a major national theater.”

Although they’ve had a pretty solid four-year run, this year marks yet another major turning point for the company; it heralds the first time the theater will announce a full season. That well-researched strategic step, in conjunction with their established and burgeoning collaborative relationships, seem set to mark 2014 as a banner year for Cara Mia Theatre Co.

Despite recent year’s exciting developments however, Cara Mia is still small and still a relatively new player on the competitive Dallas scene. Lozano’s not worried though. “It feels delicate, but it also feels like we belong.”