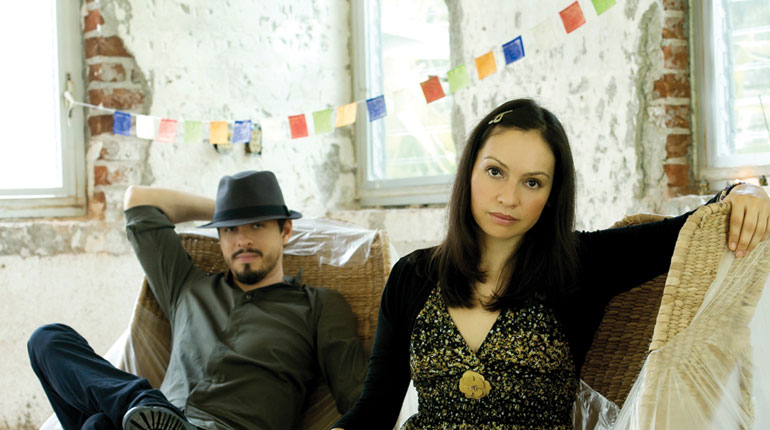 Rodrigo Sanchez and Gabriela Quintero have been playing together for more than fifteen years. First as young thrash metal fans in their native Mexico City, then as innocents abroad and street musicians in Dublin, Ireland, at the turn of the millennium, and finally as the globe-straddling, film-scoring, record-breaking artists they are today. The extraordinary interplay between Sanchez’s fiery lead lines and Quintero’s phenomenal rhythmic battery is truly universal. You probably have heard their sound without knowing it, as the married duo contributed to the 2011 soundtracks of Pirates Of The Caribbean: On Stranger Tides, and Puss In Boots.

Arts+Culture spoke to Rodrigo Sanchez as he toured the West Coast, prior to the couple’s arrival in Texas where they will play several shows in the state this July.

A+C: What are some of the influences in your life in regard to your music?

SANCHEZ: Musically speaking it is a real blend; we (he and Quintero) both were listening when we were kids and our parents were pretty musical so we were listening to everything. When we were growing up Gab went more into this ’60s and ’70s rock and I went more into the heavy metal side. Then we melded eventually and that is pretty much what it is now. I think when we left Mexico City 15 years ago and went to Ireland where we spent eight years living in Dublin, that changed the perception of what we were and what we became; it opened up different choices in our life to decide what we wanted to be.

A+C:   What were you thinking back then?

We just wanted to play music because it is something that we naturally like to do and, of course, we understand we are lucky because at the same time, that gives some kind of happiness to the people that like to listen to music.

A+C:   Going from Mexico City to Ireland, what was the step and the cultural shock of it?

We wanted to go to a place where we did not feel like we were in a big city, but at the same time it was a good opportunity to learn a different language and it was great because we did not go to an English school to learn. We were forced to work on the streets and it was a good experience. We played on the streets for a year and we moved around and played different countries and we were busking. We came back eventually and found our manager and our record label, but it was probably the most exciting time in our lives.

A+C:   Do you miss that raw passion that you had to have starting out playing on the street?

Of course, because we felt completely detached from all patterns that we wanted to get rid of, family and all that, and we felt free and you need that. Sometimes we really had to beg and hope that it was not going to be raining because we needed to pay the rent; that part of it was hard, but it was all part of the experience and we really enjoyed it. We didn’t really suffer at all and we were just in the middle of a great adventure. Nowadays, we try to continue to see things that way, but it is obviously not the same and the whole thing depends not only on us anymore, and it has been like that now for over five years so it is a different kind of way. We have to learn how to deal and live and enjoy every different stage in our lives.

A+C:   What is your take on the international music right now?

It is funny, but I think it has been like two or three years since…I have found myself away from the actual scene of festivals and all that. We never stay to see what other bands are playing and we are pretty cautious and we try to be fit and in great shape to do the full tour. When we started touring ten years ago we did the kind of things that you have to do when you are younger and you tour and you are having fun. You have to deliver and our music is demanding; we have to play the guitar and be pretty sharp when we are on stage so when we are on tour we barely stay at the festivals and we barely go out and check out bands and it has been like two or three years that I don’t even know the new bands. It was probably something I did unconsciously because I was like the guy ten years ago who was aware of what was happening and I knew the new bands and I had my opinion.

A+C:   What, if any, differences are there between writing for your own CDs and for films?

It is different because with albums we play what we feel and what we think our fans will enjoy. For film, it is pretty different because you are not free to do whatever you want. You are playing music, but sometimes it is a difficult situation and I felt that I was working for someone else, and we were. We had a boss, which is the producer, so no matter what you write, if they feel it is not music for the scene then you have to go and do it again. We were lucky because we worked with a lot of people who helped us do that. It is great if you set up your mind to do it, that it is going to be like this, and it is always good to do something different and learn something different.