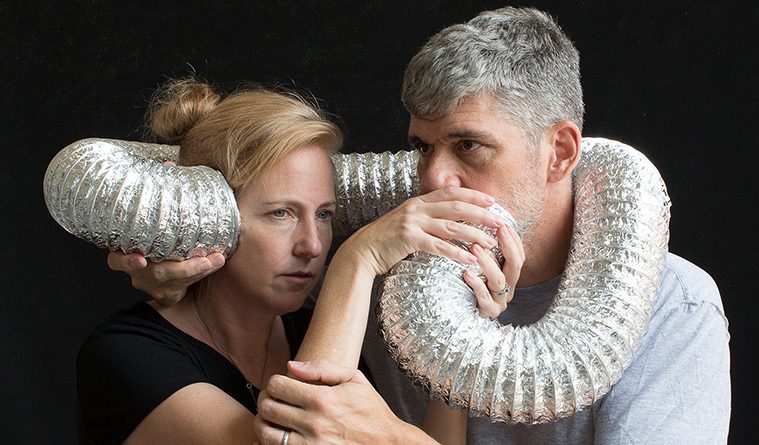 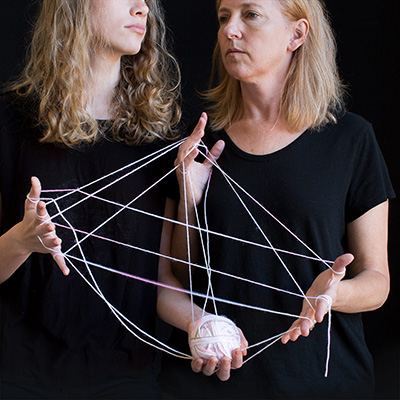 “I have an absolute burning sensation to participate. I cannot just simply take a photograph and put it on the wall,” says Stephan Hillerbrand. “We have to participate in the work now in a different way than we did before.”

Hillerbrand collaborates with Mary Magsamen as the husband-wife artist duo Hillerbrand+Magsamen. Together they address the growing tension of social disconnect and denigration of human connection with their new and striking multimedia performative artwork 147 Devices for Integrated Principles. From a piece of aluminum foil with duct tape to ensure fidelity or a length of twine to allow yourself to forgive all the people who have wronged you, Hillerbrand+Magsamen’s 147 analog devices incorporate simple objects as possible solutions to fix ails of modern society caused by digital devices meant to bring us closer together.

“These [digital] devices are building up bigger walls. We are less tolerant and feel more alone than ever before in American culture,” says Hillerbrand. To dismantle these walls, community is at the core of 147 Devices for Integrated Principles, and Hillerbrand+Magsamen knew from the project’s inception “this has to be a participatory community event.” Incorporating music, performance, video, photography, and hinging on audience participation and interaction, the 60-minute production, created in collaboration with Austin playwright and author Kirk Lynn (Rude Mechs) and Austin composer Peter Stopschinski, takes place May 15 and 16 at 7:00pm at MATCH – Midtown Arts and Theater Center Houston. 147 Devices is supported by Cynthia Woods Mitchell Center for the Arts through their Innovation Grant program, along with the Houston Arts Alliance and many others.

Participation is key in this performance and even the artists are taking part in new ways—it is the first time Hillerbrand+Magsamen have performed live. Audience members can expect to use their phones and follow instructions on how to use a “kit” found under their seat. Hillerbrand explains, “We hope the audience leaves this experience saying ‘Wait a minute! This is sort of like what I go through every day! There are all these things pulling at me in different directions and maybe that’s not a good thing. When I step back and see all these supposed ways to communicate, are they really bringing us all together or pulling us apart?”’

The hurricane preparedness kits Houstonians assembled during Harvey influenced the kit included in 147 Devices for Integrated Principles, and the artists pondered what to include in a preparedness kit for things society does not normally have devices to fix: a crazy president, violence in the schools, or the universal human condition of a broken heart. 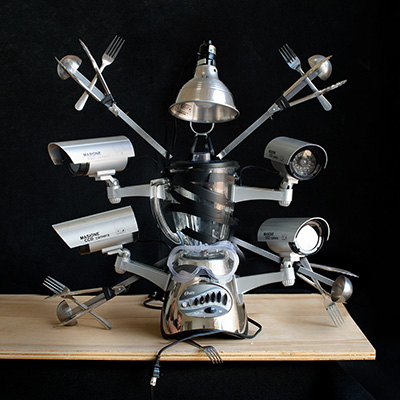 While attending a residency at The Vermont Studio Center during the fall of 2017, a fellow resident wrote Magsamen a note after confiding in her during the course of the residency, asking her to create a device to heal a broken heart.

“To me, it was the action of her asking me that was really profound,” says Magsamen. “I thought, wow, maybe we can make devices to help people. The idea that someone would ask for help extends to that idea of community again, and interaction, and making connections.”

Inspired by the inventive, engineering nature of their 10-year-old son Emmett, the artists maintain a childhood curiosity, a mad scientist approach to creating devices. Hillerbrand+Magsamen strive to mimic the simplicity of Emmett’s inventions—such as a toy gun made from a popsicle stick, scotch tape and paper—when designing devices to fix a broken heart or navigate political conversations. There is no need for artificial intelligence or a knowledge of coding to fix the world. A spoon and fork will do. “Stephan has taken every silver item out of the kitchen and brought it into the studio to make devices,” says Magsamen.

The artist’s individual practices have developed over the years. Hillerbrand is a recipient of two Fulbright Fellowships and a MacDowell Colony residency, Magsamen, curator at Aurora Picture Show, was recently awarded a Warhol Curatorial Fellowship, and both artists have spent significant time teaching. They have received numerous grants and awards for their inventive collaborative work, have participated in residency programs throughout the U.S. including the Lower Manhattan Cultural Council, Experimental Television Center, the Santa Fe Art Institute and others, and have presented their videos and installations internationally.

True to the Fluxus tradition, 147 Devices has become an integral part of Hillerbrand+Magsamen’s lives for over a year. The artists’ practice blurs the line between performance and life. Their intimate personal lives are the central theme of their work, but there is tonal shift present in this new work. Their 15-year-old daughter Maddie and Emmett have been major focal points in works such as Higher Ground or Home Balance. Now they are not as visible, and their absence is representative of the evolution of the themes Hillerbrand+Magsamen plan on addressing in the future. They see their work responding to their children leaving home and becoming adults, or the dynamics of the children becoming caregivers for them when Hillerbrand+Magsamen are elderly.

The personal as political is another tonal shift, and these brave artists are taking us beyond their domestic environment and into the world around them. The idea for 147 Devices for Integrated Principles came post-election, and a town hall was the original platform. As the concept grew, the artists realized live performance was better suited to explore the themes of community and participation. The need to do something, anything, post-election is an undercurrent driver for many artists now, and Hillerbrand+Magsamen see this new artwork as their device for action.