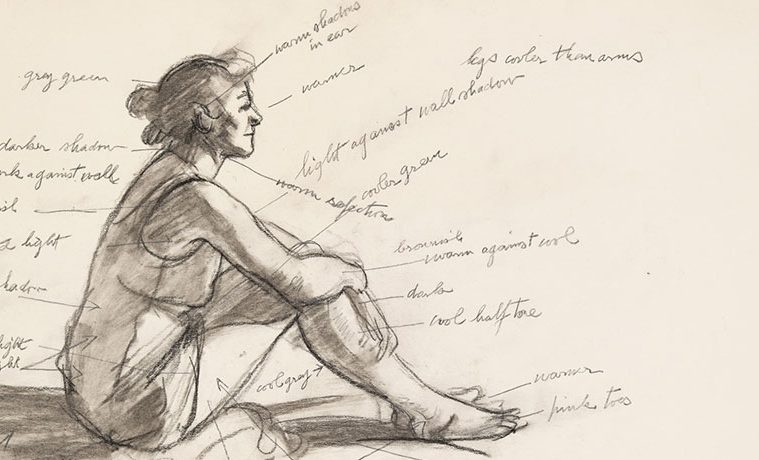 A little Edward Hopper goes a long way with me, though I can’t picture American art without him. In a 2007 review of a Museum of Fine Arts, Boston Hopper retrospective, The New Yorker critic Peter Schjeldahl put his finger on why, noting that “Hoppers in the flesh add remarkably small increments of pleasure and meaning to Hoppers in reproduction. … Their drawing is graceless, their colors acrid, and their brushstrokes numb. Anti-Baroque, they are the same thing when looked at up close and when seen from afar.”

As if to underscore the point, the Dallas Museum of Art’s presentation of the traveling exhibition Hopper Drawing: A Painter’s Process includes both actual and reproduced Hopper paintings for comparison with the numerous studies and preparatory sketches behind them. If Hopper were a better painter, the absence of in-the-flesh versions of his two most iconic paintings, Nighthawks (1942) and New York Movie (1939), might come as a more serious disappointment. (Happily, the original Nighthawks appears in Art and Appetite: American Painting, Culture, and Cuisine, opening Feb. 22 at the Amon Carter Museum of American Art in Fort Worth.) Then again, as Clement Greenberg observed, if Hopper “were a better painter, he would, most likely, not be so superior an artist.”

And his drawing—as graceful on paper as it is graceless on canvas—might not come as such a surprise. This show is packed with them, starting with early works revealing an exquisite delicacy and deftness of touch before he consciously coarsened his rendering. Agile studies of the artist’s own hands and lively, uncannily observed pen-and-ink sketches of characters he encountered in cafés, parks and streets during his youthful Parisian sojourns are among the unexpected delights from the years before he settled into his characteristic style.

But even that familiar Hopper—the Hopper of such moody classics as Early Sunday Morning (1930), Office at Night (1940) and Morning Sun (1952)—becomes unfamiliar in crayon, charcoal or fabricated chalk. There’s a bristling confidence in the way he tackles a picture’s architecture—sometimes paradoxically both expanding and compressing the same building—and experiments with the placement of his figures. (“Hopper bets everything on composition, which, in his work, is almost as tautly considered as in a Mondrian,” Schjeldahl wrote in his 2007 review, in which he also advised viewers to sketch Hopper’s paintings in order to better grasp them: “Just get the main shapes, including those of empty space, and how they nest together in the pictorial rectangle.”)

Particularly fascinating are studies in which architectural details or parts of a figure are surrounded by arrows and scribbled color notations—pale gray here, dull purple there—that Hopper wanted to remember when he returned to the studio to paint. Showing Hopper thinking out loud, these drawings capture the “tension between the real and the imagined that was really at the heart of Hopper’s art,” says Whitney Museum of American Art curator Carter Foster, who organized the show, on an audio guide on whitney.org. 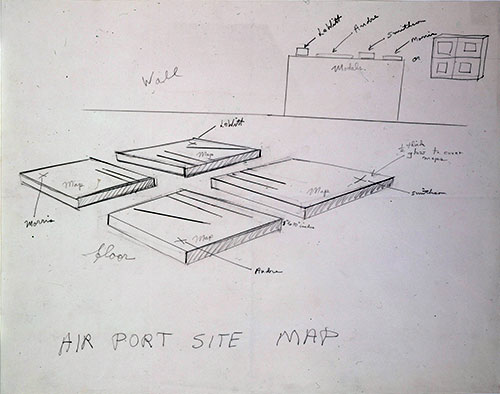 They also serve as a reminder of the fundamentally conceptual nature of drawing, making the timing of Hopper Drawing’s Dallas stop especially timely, since it overlaps with the DMA’s homegrown gem of a show, Robert Smithson in Texas. Organized by consulting curator Leigh Arnold, the exhibition examines five projects Smithson—another artist you can’t picture American art without—proposed in Texas between 1966 and 1973. (Only one, the earthwork Amarillo Ramp, was realized. It was posthumously completed after Smithson died in a 1973 plane crash while surveying its final arrangements.)

Walking through the Smithson show before visiting Hopper Drawing, I gravitated mostly toward the photographs of Amarillo Ramp and a geometric “aerial map” made entirely of pieces of mirrors for one of his Dallas-Fort Worth Regional Airport proposals. Terse and schematic, the drawings seemed too dry to reward much lingering.

But after spending time with Hopper, I returned to the Smithson show’s gallery, where suddenly the latter artist’s notations came similarly alive and I began linking his ideas together.