More than a century ago, the western art world found a new subject of intrigue. As Europeans began heavier colonization of Africa, they began returning home with a variety of exotic art unlike anything the public had seen before. In turn, European modernists, including Pablo Picasso and Henri Matisse, incorporated visual elements inspired primarily by African masks and sculptures, applying the bold, sharply etched lines and warmer color palettes to their own works. And while this would lead to some radical new art movements and a new curiosity in art from the African continent, it was still art through western eyes and criteria. What defines “aesthetic” varies widely among cultures; beauty and ugliness are subjective and based on their cultural context. It would take a long time for westerners to understand and appreciate many of these African works more deeply, by focusing on their functionality and what they meant to the people who created them.

That’s what sets Language of Beauty in African Art apart from other exhibitions centered around a similar theme. “The umbrella theme is that we’re exploring indigenous perspectives on beauty and ugliness as expressed in local art forms in Africa,” says Kimbell Art Museum’s Jennifer Casler Price, serving as the in-house curator for the show. Price notes the importance of using the word “language” in the show’s title. The intent of head curator Constantine Petridis was to use as many African terms as possible to describe the aesthetic ideals contained within the collection. The show is on view at the Kimbell Art Museum April 3- July 31.

Organized by the Art Institute of Chicago, the Kimbell is the debuting institution, presenting nearly 250 objects collected from museums and private collections from around the world. Twenty African cultures from approximately ten countries are represented, primarily from the western and central parts of the subcontinent.

The exhibition’s first section is dedicated solely to the Chokwe people, a population long admired for its relative naturalism and refinement. A wood carving rendering a male figure, identified as the culture hero Chipinda Ilunga, represents male power and virility, but also moral integrity. The Chokwe have a word that describes all of those traits cibema—and it’s an example of the recurring trend of one term having multiple meanings to convey beauty.

­­­
A section further into the show looks at the concept of ugliness and how it functions in the context of art. “In our western language, ‘ugly’ is a negative, right?” Price says. “And beauty is a positive. And what people will discover in parts of this exhibition is that ugliness is not seen as ugly. It’s powerful, it can be fearful, it can be horrifying, it can be humorous.” She references the ceremonial masks as an example, noting that they weren’t meant to be decorative, but were worn in ritualistic dances to summon spirits connected with the otherworld. Additionally, many of these masks and headdresses have animal elements. “There’s something really interesting about how the human world is kind of identified with beauty and the animal world is identified as ugly,” Price explains. “Because the animal world is a world that we don’t understand as well as the human world.”

But not all masks serve to represent masculinity. A section of the exhibition examines four different cultures and their standards of beauty, which includes clarity, youthfulness, moderation and balance. Included here is a helmet mask from the Mende culture called a sowei, which has been carved out of dark wood to resemble a woman with supple neck rolls. The wood is polished to symbolize fresh, plump, youthful skin, depicting a young and healthy woman in the prime of her life who is ready to bear children.

“Another thing that’s inherent in a lot of African art—and again, kind of a symbol of beauty—is the practice of scarification or tattooing,” Price says, adding that it’s often done in conjunction with ritual ceremonies to mark milestones in a person’s life, such as reaching puberty. That subject is presented in the section titled Gracing the Body and the Head, which contains one of the exhibition’s oldest pieces: a terracotta head from the ancient city of Ife, dating sometime between the 12th and 15th  centuries, the face of which bears striations indicative of the traditional scarification patterns. The section also looks at the importance of elaborate hairstyles, which are still seen today, echoed in sculptures, ornate combs, and hairpins. 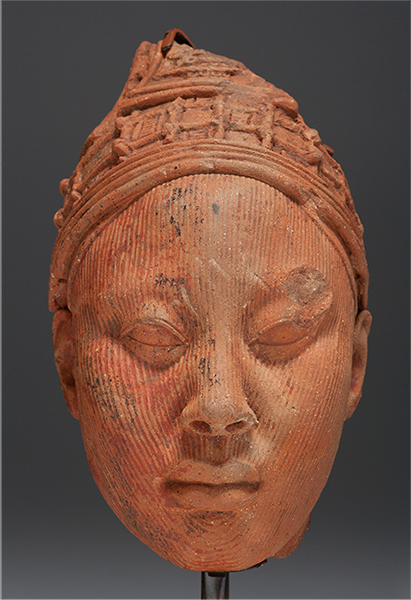 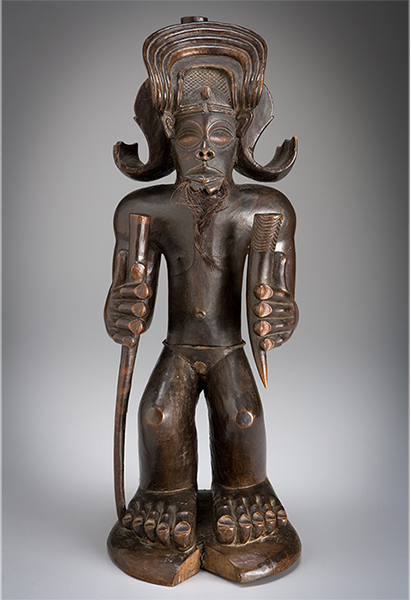 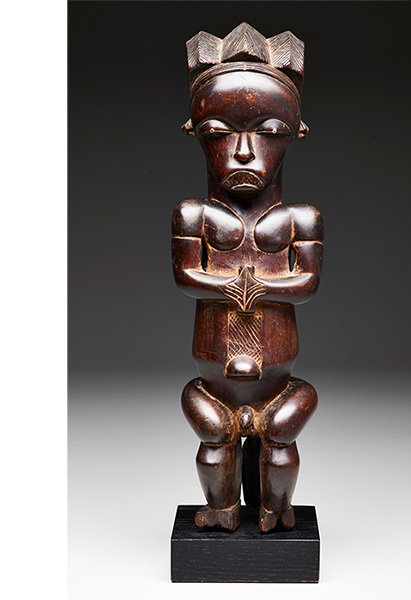 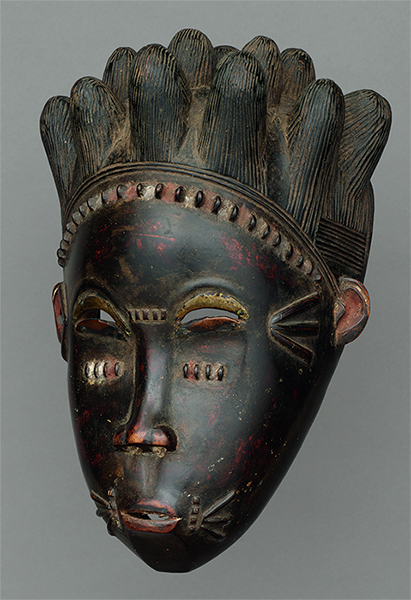 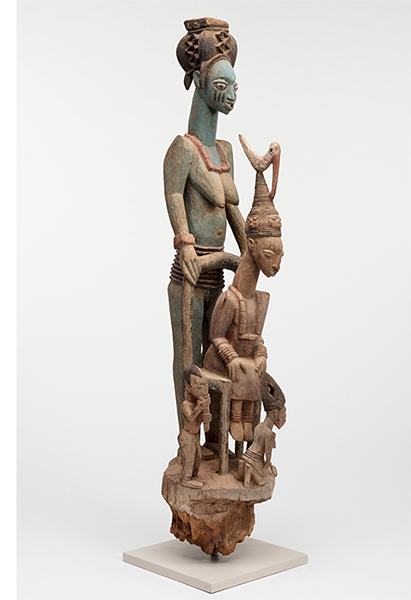 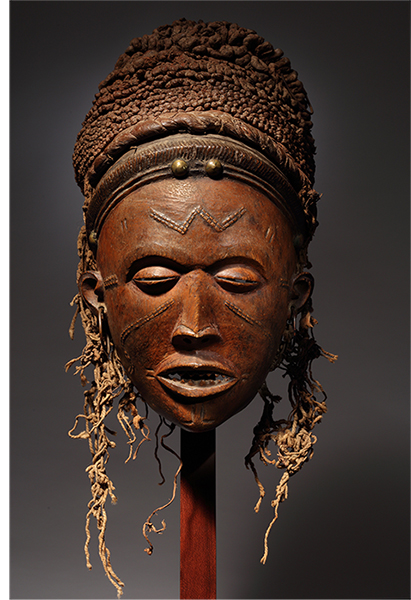 Cross culturally, extravagance has long implied prestige and power, and that holds true in Language of Beauty. Items that would ordinarily be purely functional, like a spoon or cup, become status symbols when supreme craftsmanship and fine materials are involved. From stunning gold jewelry to intricately carved spoons, visitors will get a glimpse into how beautiful little objects carry larger than life messages. There is, however, an object that’s nearly larger than life. A stately wooden veranda post from the Yoruba people, likely used as part of a portico, is carved into the form of a king and queen. Price points out that scale is what’s important in this case—it’s the queen who’s larger, assertively standing above the king and conveying a decidedly dominant presence. 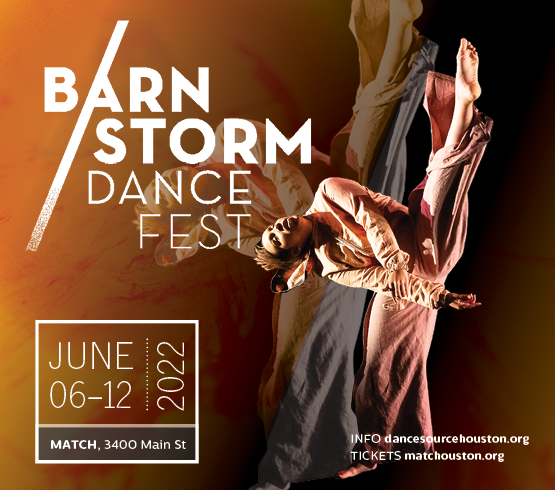 In the show’s eighth and final section, ten wooden statuettes covered in nails command sheer awe the moment they’re encountered. Derived from the Kongo and Sonye cultures, these power figures (also known as nail fetish figures, though contemporary scholars have been using that term less) are primarily rendered as humans, with the exception of one two-headed dog. Upon first sight, these nkisi nkondi may be unsettling, which, says Price, is the point. The nails were usually hammered into the objects as an attempt to heal a sick person or attack enemies. “To the cultures that made it, it’s not ugly,” she explains. “In fact, the ugliness is serving a really, really important purpose—to drive out these spirits and to imbue that sculpture with this sense of both fascination and being terrified… so the awesomeness is combining those two elements, that something can be fascinating and terrifying at the same time.”

Price recalls an idea that resonated with her in a recent conversation with Constantine Petridis: “Going back to that idea that it entails use and functionality that goes beyond appreciation, beyond aesthetic evaluation, that their idea of beauty is very pragmatic… It’s art for life’s sake.”