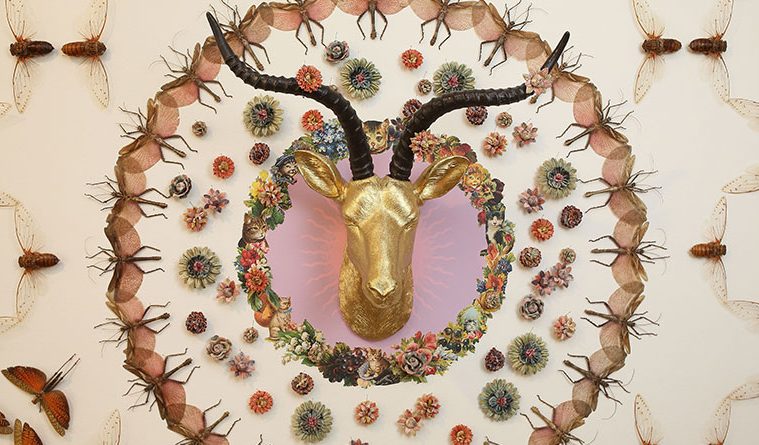 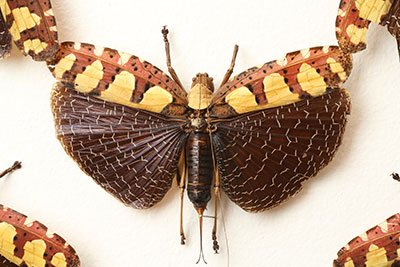 The contrast between the beautiful and the grotesque, the attractive and the repulsive, is deeply mined territory in visual art. Artist and textile designer Jennifer Angus takes these ideas to visceral extremes with her latest installation, Silver Wings and Golden Tales on view at the Esperson Gallery in Houston, through June 28. An overview of the show reveals the intricate beauty of the patterns she has created. Lacy circles repeat on the wall’s surface, culminating in bursts of color and delicate line, crowned with golden animal heads. A closer inspection produces the shiver-inducing realization that these patterns are created using pinned insect specimens, remarkable in their level of preservation and uniformity of size and color. Angus, a professor of textiles at the University of Wisconsin—Madison, has created a room-filling installation, her first in a town that (based on familiarity alone) should be entirely inured to what seem like prehistorically large insects. It’s our discomfort with six-legged creatures, our own squeamishness at nature, that Angus sets out to exploit by laying on the beauty as thickly as she can. Even a reluctant viewer will be convinced. 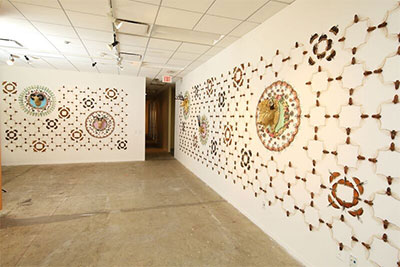 Like the multiple species she uses as material, it’s helpful to think of this artist’s work in terms of categories. There is installation, sculpture, and narrative, all of which intertwine to various degrees depending on the piece. Angus’ unmistakable medium is the omnipresent aesthetic thread, as well as a Lewis Carroll-esque, Victorian sense of wonder and naturalism. She uses the methods of an amateur naturalist, rehydrating, arranging and pinning her specimens, but plays fast and loose with their conceptual associations. Like the Victorians, Angus seems less intent on the scientific specifics of her many species, and more interested in romanticizing and stylizing the undervalued, lowly insect.

In addition to the astonishing installation, there are voluminous bell jars with insects combined from several species, a la Frankenstein’s monster. Are these fantastic hybrids merely novel aesthetic arrangements or grim indicators of our incessant need to “monkey” with nature? Angus’ visual clues don’t answer such questions, providing only deeper narrative paths to wander down. She shows us iridescent beetles under glass in a multi-drawer box. Each beetle’s wings are etched with a single word, the group laying out several potential stories depending on the viewer’s self-direction. 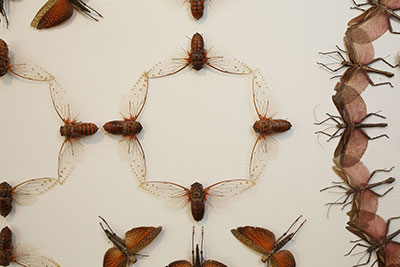 It won’t be a huge leap for viewers to learn that the artist has penned a novel, directed at the voracious YA audience, about a Victorian-era boy who has the ability to communicate with insects. There is a profound sense of childlike wonder in all of her work, an insistence on aesthetic connections and poetic narrative that leave us with a comfortable amount of mystery. She includes a wall-mounted series of glass bubbles that spell out a line from a mid-19th century illustrated poem by William Roscoe using letters made of tiny six-legged bodies.

This work is made of bugs, but it’s not about bugs in a didactic sense. Rather, Angus plays on our relationship with them, for better or worse. We are free to unspool this idea to include our relationship with the larger natural world. As Angus has presented them, these creatures are unnatural, too perfect, disguised by their uniformity. She’s imposed the type of order that our species finds compelling and beautiful, one that represents dominion over the ‘chaos’ of nature. We are presented with a contrast even more pointed than that of attraction vs. repulsion, one that is decidedly unbeautiful. It’s the contrast, irony even, that our need to impose our version of order on the natural world may be our undoing.