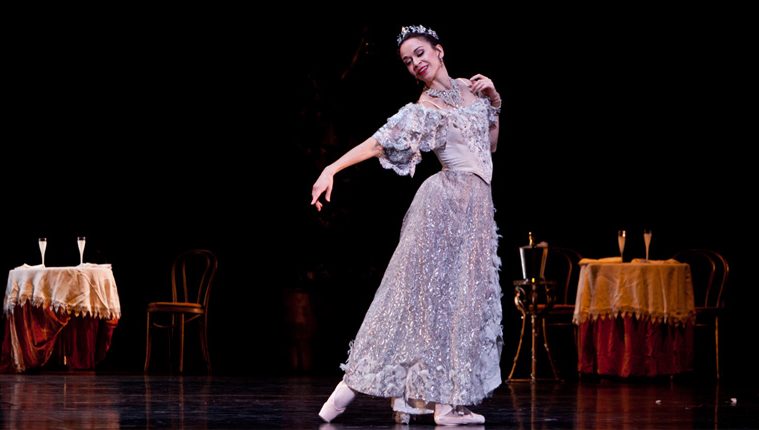 Jubilee of Dance: A Tribute to Amy Fote

What a bittersweet night at Houston Ballet’s Jubilee: a Tribute to Amy Fote.

Although we could have watched her dance all night, there were other treats in store.  As usual, the Jubilee provided a smashing sampler of what’s to come and greatest hits, including Melissa Hough and Connor Walsh’s powerhouse pas de deuxfrom Nicolo Fonte’s See(k). Strong, sexy and sensuous, Fonte’s off-kilter shapes fit perfectly on this dynamic couple. Christopher Gray had a great night in Stanton Welch’s Clear, assisted by Ilya Kozadayev, Lauren Strongin and Derek Dunn, a newcomer to watch. Karina Gonzalez and Christopher Coomer emphasized the more exotic tones of Welch’s signature Indigo. Pure elegance oozed from the company’s performance of Twyla Tharp’s Brahms-Haydn Variations, which offered to soothe our sorrow over the departing Fote.

Fote danced excerpts of her favorite roles in Manon, Marie and Merry Widow, reminding us all of why she was a ballerina like none other. It was her breathtaking interpretation of Manon that had the audiences gasping, “I will never see Amy Fote dance this again.” Fote imbues every character in her grasp with such depth. A master of proportion, she knows when to use her generosity and when to hold back, letting us lean forward. Fote leaves a legacy of excellence. During her eight years at Houston Ballet she set a shining example of artistic discipline, commitment and extraordinary abilities.

A video tribute, written by David L. Groover and narrated by Louise Lester, took us on a journey through her extraordinary career from The Milwaukee Ballet to Houston Ballet, where she ends her career. During the rose-filled farewell, Welch dropped to his knees as if to say, thank you and don’t leave. We were right there with him. We already miss her, but remember, you can catch her as Sugar Plum on December 29 in The Nutcracker.

Our last glimpse of Fote was one of her waltzing with joy, out of the ballet world and into the next chapter of her life. I wish her well and have been honored to be one of many in her spell.