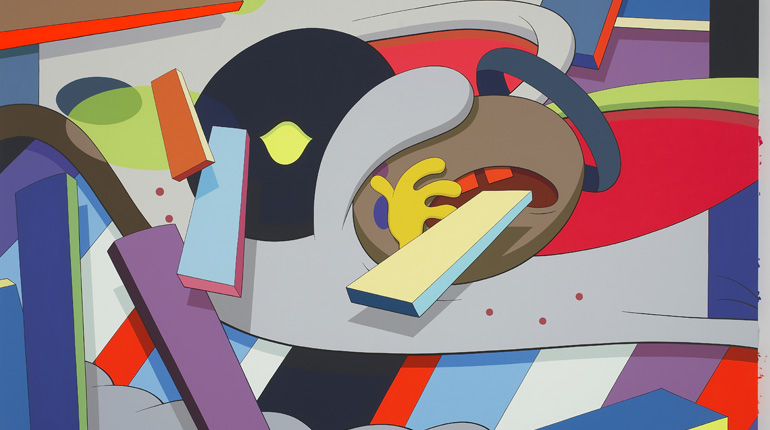 The silken concrete walls at the Modern Art Museum of Fort Worth would seem like a tempting canvas for the work of a former graffiti artist. That artist, drug who used to paint the sides of billboards and trains, ed now works on canvas, discount in sculpture and with special edition apparel and toys. Furthermore, he has parlayed these beginnings into an international art brand.

Brooklyn-based artist Brian Donnelly began his career as a graffiti writer. He took the tag KAWS, using it, according to the museum, on “his painted-on interventions to ads in and around Manhattan.” KAWS explains, “At first I chose it for the way the letters balanced with each other, but later I realized that by working under this name it becomes harder for people to form opinions about who is making the work and leaves them with just the work.”

When he entered New York’s School of the Visual Arts to study illustration in the 1990s, he already had a following. Before long, his subverted imagery on bus shelters and phone booths became popular not only in New York but also in Paris, London, Berlin and Tokyo.

“He (KAWS) is following directly from iconic pop culture and making it into something else,” says the Modern’s curator Andrea Karnes.

Now in his 30s, KAWS has taken pop art to a new level in this global community. Icons such as Snoopy, the Simpsons and Spongebob Square pants have found their way into his work. His Kimpsons series, he says, “were all unique paintings that I produced packaging for to make them look the same as the toys that are sold in blister packaging. I started this series as a way to bridge the parallels between collecting art and collecting toys or sneakers, etc. I thought it was really interesting that many young people would sooner spend money on a rare toy or sneaker than art and often didn’t consider art as something you could own.”

“His work is falling along the lineage of pop art. But whereas Warhol and Rauschenberg were giving a more straightforward view of pop culture, KAWS is updating it,” explains Karnes. These images are recognizable icons in the way that Andy Warhol used Campbell Soup Cans in the 1960s, but they go beyond Warhol’s images of a consumer society.

In the same vein, KAWS has created a commodity. The apparel and special-edition line of toys that he designs and sells through his successful Tokyo boutique has launched an international brand. “OriginalFake is a company I started six years ago in partnership with a Japanese company called Medicom Toy. I was making different products and collaborations for 10 years before I started OriginalFake. I started the shop/company as a way to have a direct outlet to my audience with the products I make,” says the artist. “It seemed really natural that I set up the shop in Tokyo. I was already working with a lot of friends there for years and have a Japanese partner and the fact that we mostly produced in Japan and China made it just seen right to open in Tokyo,” he says.

In the past decade, KAWS has embraced the contemporary art community in Japan, forming deep friendships with artists such as Takashi Murakami, who also works on the principle of artist as gallerist. KAWS was also one of a roster of internationally renowned artists, including Murakami, Damien Hirst, Cindy Sherman, Jeff Koons and Luc Tuymans, among others, who participated in November’s New Day Auction: Artists for the Arts. This event raised over $8 million for the victims of Japan’s earthquakes.

“When I make sculptures I work with a foundry and there are other people involved in getting to the end result. This goes the same for the objects I create for OriginalFake. When I’m painting there is more of a direct one to one relationship,” he says in explaining how the work he does for museums differs from the work for his boutique.

His creations, whether for OriginalFake or for museums all bear his logo, X. Branding and selling art as a commodity is one of particular interest to KAWS, “I try not to differentiate between my approach to painting and to designing product. Often drawings that are developed while gathering ideas for a painting might work their way into the different things I make for Original- Fake and vice versa.” The Xs are one thread that connects all of his work, each carrying different meanings. Individually they can signify a kiss while in triplicate, they can represent pornography or poison. When something is X-ed out, it is eliminated. The eyes and hands that KAWS Xs out, seen in the exhibition’s “KAWSbob” paintings and his “Accomplice” and “Companion (OriginalFake)” sculptures, signify the virtual death of his characters.

“I’m looking forward to having my work exhibited for the first time at The Modern in Fort Worth. I love the Tadao Ando architecture and look forward to see how the work adapts to this setting,” KAWS says of his first public exhibition in North Texas. Karnes is also looking forward to the exhibition, saying, “This is a way to connect to viewers of all ages”, adding that the exhibition is a coup for the museum. Having KAWS’ work shown locally is an opportunity to participate in this 21st century dialogue about art and culture: is it Original or is it Fake? Does it matter?