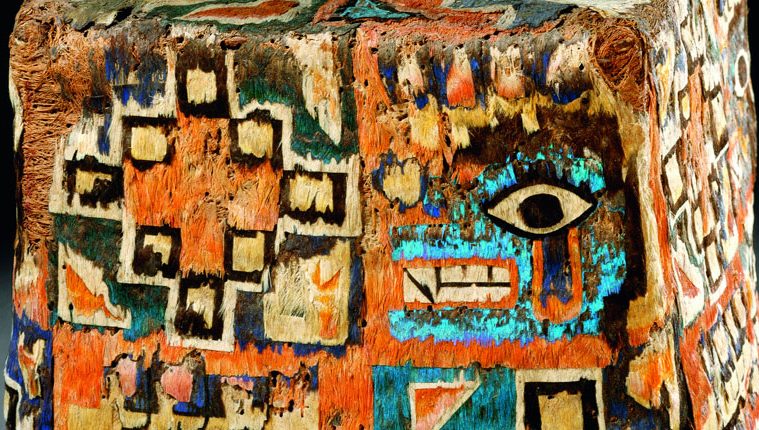 Lords of the Ancient Andes

Between AD 600 and AD 1000, long before the Inca, the Wari forged a complex society widely regarded today as ancient Peru’s first empire. Wari: Lords of the Ancient Andes, the first exhibition of its kind in North America, opens June 16 at the Kimbell Art Museum for a summer run. This momentous exhibition explores the Wari’s artistic achievements through more than 145 objects highlighting all major media in which they worked – polychrome ceramics, ornaments made of precious metals or colorful mosaics, sculpted wood and stone objects, and textiles of striking complexity.

“This insightful exhibition depicts the culture of a brilliant but relatively unknown ancient society,” commented Eric M. Lee, the Museum’s director. “Visitors to the Kimbell will be astonished at the artistry and condition of the more than 1000-year-old artifacts on display.”

As predecessors of the Inca Empire, the Wari had no previous example of expansionist states to draw upon and thus represent a major development in Andean civilization. Unlike their Maya contemporaries, the Wari never developed a written language. Thus, modern opinion about their achievement is based exclusively on their artwork and other material remains. In the absence of writing, the artworks that circulated throughout Wari society acted as vehicles of communication, recording and preserving the way in which the Wari regarded themselves, nature, and the divine realm.

“A remarkable quality of Wari art is the way in which it appeals to the modern eye,” said Jennifer Casler Price, curator for Asian and non-Western art at the Kimbell. “This is particularly evident in the extraordinary array of tapestry-woven tunics in the exhibition.”

These tunics, the most artistically complex objects that Wari artists created, depict supernatural beings that are so abstracted into geometric forms that the original motif disappears from view. A tunic of this type is masterfully depicted in stone-and-shell mosaic on the Kimbell’s figurine of a Standing Dignitary, whose commanding presence belies its diminutive scale. Many of the Wari’s greatest artistic accomplishments are realized in small, portable items – such as a Bag with Human Face – which could be transported across the Andean region, spreading the Wari culture to diverse and distant communities. It is through these objects that we are able to gain access into the values and beliefs that shaped Wari society and contributed to its imperial expansion.

The exhibition explores several themes in Wari art. The Gift of Food and Drink presents vessels reconstructed from a three-ton buried deposit of deliberately shattered ceramics that may represent an offering of wares used in official feasts. Such feasts were lavish affairs with food and chicha (native corn beer) and apparently were a major component of Wari statecraft. They allowed Wari hosts to build prestige, assert authority, and indebt guests, since, then as now, gifts of any kind are rarely free. Wari feasts may have capitalized on the Andean belief that the world exists due to the interaction of two forces harmonized through the mutual dependence that reciprocity creates.

The Wari Realm demonstrates the spread of Wari imagery – most importantly, a staff-bearing deity that was the focus of Wari state religion – to many areas of the Andes. This frontally posed supernatural being is probably a nature deity, perhaps the sun or thunder. It carries staffs of authority and is sometimes flanked by profile attendants in a formal expression of hierarchy that may have paralleled the Wari earthly political structure. Though the role of religion in the Wari’s expansion is not well understood, images such as this make it seem likely that religion and politics were part of a single process. Indeed, the art suggests that Wari lords drew their authority to some degree from affiliation with the divine and that they may have owed their success in part to the belief that they could mediate human and cosmic matters, shaping the lives of women and men. 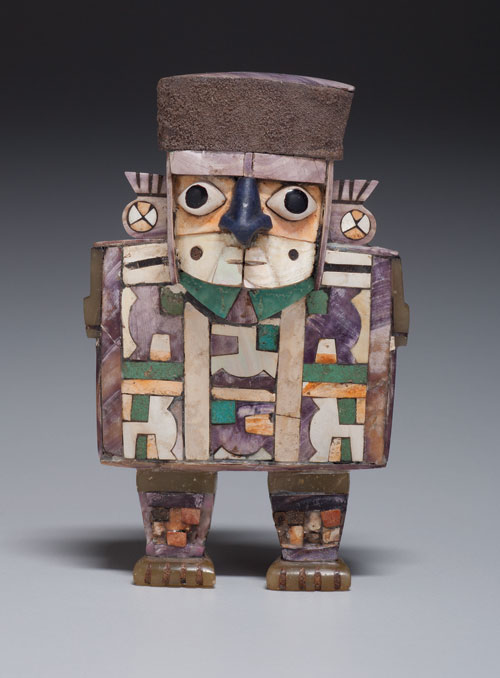 The Art of Regalia examines the ceremonial clothes worn by Wari lords and the spread of these objects to different places in the Andes, many perhaps as diplomatic gifts that fostered alliances or as imports treasured for their prestige. Among them are textiles – a crucial Andean art form – including elaborate tapestry-woven tunics, vibrantly colored tie-dyed garments and cloth lavishly covered with exotic feathers. Remarkably, many of these Wari textiles have immediate contemporary appeal; the brightly hued tunics, worn as emblems of status, exhibit a penchant for hard-edged geometric shapes and intricate color patterning across a flat surface. Moreover, the sophisticated designs of the tapestry-woven tunics, the garments of elites and rulers, demonstrate an aptitude for experimenting with the form that is on par with 20th-century artists. Also featured in this section are personal ornaments made of precious mosaic or noble metals.

Offerings and Ancestors considers offerings that the Wari made in varied contexts. One of the most common was the tombs of the honored dead, where many of the exhibition’s objects likely were found. The characteristics of highland tombs suggest that Wari elites venerated important ancestors, who probably endowed descendants with legitimacy and spiritual protection. The Wari also buried fine objects in offerings unassociated with human remains; these likely had varied votive or dedicatory purposes that are still under study. The most elaborate of such offerings included human figurines or well-decorated ceramics that were deliberately shattered in rites that must have impressed all who witnessed them.

Wari: Lords of the Ancient Andes contains superior examples of Wari artwork selected from more than 40 public and private collections in Peru, Europe, Canada, and the United States, including the Museo Nacional de Antropología, Arqueología e Historia in Lima, the Ethnologisches Museum in Berlin, the Metropolitan Museum of Art in New York, and the Textile Museum in Washington, D.C. Many artifacts of the Wari were originally discovered in their eponymous capital, one of the largest archaeological sites in South America.