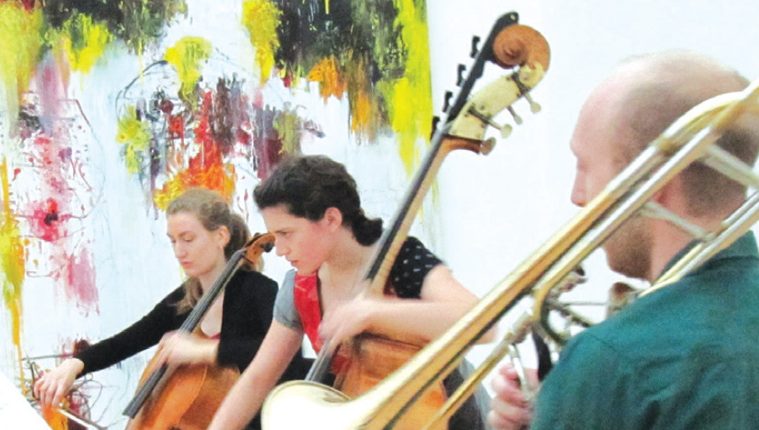 SO YOU HAVE TRAINING AT A major music school, treatment does that guarantee you a career? Not necessarily. That’s where professional development programs come in. As the number of highly trained musicians graduating from universities and conservatories has dramatically increased over the last generation and the number of traditional career opportunities has steadily decreased, online the issue of how to make a living as an artist in the 21st century is one being pondered by many institutions and arts organizations. In Houston, three distinct programs are providing their own answers.

Catching up with rising conductor Jacob Sustaita isn’t an easy prospect. I finally connected with him in between rehearsals of the recent production of Kirk Mechem’s “Tartuffe” at the University of Houston’s Moores Opera Center, where he is the assistant conductor. I could hear the hum of a copying machine in the background as he prepared parts to distribute at his afternoon session with the orchestra.

“The thing about music schools,” says Sustaita, “is that they teach you how to play, but not how to get a job. Of all the classes I took, I remember so much from that one.”

He is referring to Janet Rarick’s “Professional Development for Musicians” course at Rice University’s Shepherd School of Music. It’s been in existence for several years, and more recently is just one of many programs offered to graduate students in an attempt address the issue of how to translate pure talent and rigorous high-level training into a working career.

“They have to be in this really intense area of study to build their performance skills,” Rarick says of her students. “However, if they can get out of that from time to time, I’ve seen that it can really change their thinking about the future and get them excited, motivated and positive about what can be done.”

If you are a young artist like Sustaita, the question is a simple one. Now that I have mastered the basics of my art, how do I turn that training into a career? With the help of some very practical assistance, Sustaita seems to have found his own answer. In addition to his position at the Moores Opera Center, the 30-year old conductor is also the newly appointed Music Director of the Min- Making Music: Making a Career Houston’s Young Artist Professional Development Programs nesota Philharmonic, where he has a weekly rehearsal in addition to his work in Houston.

Richard Lavenda is a composer and director of graduate studies at the Shepherd School of Music. He asserts, “As there are more and more alternative career paths, it’s not enough to walk out in a tuxedo and play the gig.”

Lavenda recently spearheaded the overhaul of the program he supervises. “Dean Robert Yekovich asked me to take a look at the graduate program, and to find out specifically what we are not providing,” said Lavenda. The result is a completely unique program with a menu of classes that address everything from pedagogy, to how to speak and write about music, to Alexander Technique and Dalcroze Eurythmics.

Another benefactor of the professional development curriculum at the Shepherd School of Music is Craig Hauschildt. In addition to being a freelance percussionist, he is also the Director of Education at Da Camera Houston, and oversees that organization’s newly formed Young Artist Program which offers a fellowship program that provides performance opportunities for young artists who are either in a graduate studies program, or have just completed one. Along with providing its fellows a bridge from universities and conservatories to the professional world, the Da Camera Young Artist Program also challenges its young artists to find new ways of presenting classical music in a unique and engaging way, thereby offering listeners experiences with classical music that are outside of traditional concert models.

“The definitions that people have for classical music are very limited. One of my personal goals is to expand people’s understanding of what is classical music,” says Hauschildt. These ideas are put into practice in the “Stop, Look and Listen!” concert series, for which the artists are asked to create inventive programs and pairings of music to be performed amidst the various galleries that inhabit the Menil Campus. There was something inexplicably moving about hearing music by J.S. Bach for unaccompanied flute and violin juxtaposed against the backdrop of the gargantuan, splattered canvases of the Cy Twombly Gallery. The sacred nature of Bach’s music was honored, yet attendees were free to stroll about the gallery, while listening unconstrained from the traditional concert setting.

With distinguished alumni such as Joyce DiDonato and Anna Maria Martinez, the Houston Grand Opera Studio is a much more storied young artist program. Laura Canning currently heads the program that has been in existence now for more than 30 years.

“The idea is that we are a kind of bridge between formal training and a full-fledged freelance career. I liken it to an internship at a hospital, you’re doing the work as a student doctor, but you’ve got someone looking over your shoulder to check that you’re doing it right, and you’ve got a safety-net should you be about to do something dramatically wrong,” says Canning. “We are also shamelessly elitist. We are looking for the best possible singers with the best possible artistic potential.”

Despite the self-professed elitism of the program, the singers are anything but pretentious.

“I’m a good musician, but I’m not an amazing one,” says tenor Brendan Tuohy, who is a rare third-year participant in the HGO Studio. “School is where you get the fundamentals, but there is no way I could do what I’ve done this year without a young artist program.”

He is one of 10 participants who were each chosen from a field of around 600 applicants. Currently, in addition to understudying a major role in HGO’s production of Benjamin Britten’s “The Rape of Lucretia,” he is singing a separate role in Giuseppe Verdi’s “La Traviata.” Soprano Brittany Wheeler, a current HGO Studio Artist, considers getting to be on stage with some of the most successful singers in the business the best aspect of the program.

“You think of these great stars as being perfect, but what you get actually to see is that these amazing singers go through the same process that we do,” says Wheeler. Like Brendan Tuohy, Wheeler can be seen alongside Albina Shagimuratova in the current production of Verdi’s “La Traviata.”

To some degree opera singers have always had to create for themselves how to translate their artistry and training into a working career, however, for many instrumentalists this is a seemingly new line of inquiry.

Craig Hauschildt says of this new era, “I do think we went through a very short golden age, where you could get a job in an orchestra pretty easily and have a life-long career doing it. I think now that we are past that as the only model, everyone is looking for a way to make a living.”

— CHRIS JOHNSON
Chris Johnson is a radio host and producer, a violinist and a 2008 fellow of the NEA Institute for Arts Journalism in Classical Music and Opera.