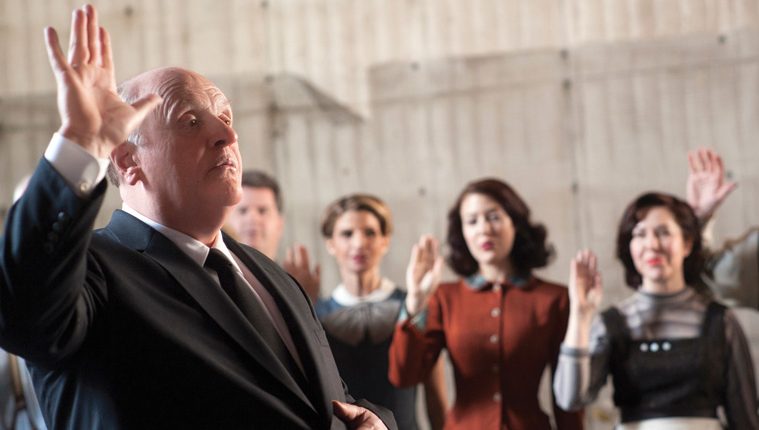 Anthony Hopkins as the lead in Hitchcock.
FOX PICTURES.

No one utters the salutation “good evening” quite as chilly as Alfred Hitchcock.

Those two words greeted viewers from 1955 to 1965 when the mystery anthology series Alfred Hitchcock Presents aired on CBS-TV (and later rotated to NBC-TV). Even by the time the popular television show sent chills up the spine of audiences, clinic its famed host had already been making his mark directing nail-biting films for over three decades.

In a career that spanned six decades and produced more than 60 films — including The 39 Steps, pills  Vertigo, pharm  Psycho, and The Birds — Alfred Hitchcock set new standards for cinematic invention and storytelling. He had an edge and his influence on the film culture outlives the portly director, who died over 30 years ago at age 80.

“Hitchcock is lord of the psychological thriller,” says James Faust, Artistic Director at the Dallas Film Society. “You know when it is his film, like if you see a Spielberg film and you know it is his or Woody Allen and then there is Hitchcock. Things are Hitchcockian for a reason and he gets into the recesses and parts of our minds and things that we don’t want to discuss and puts them onscreen in pretty blatant and violent manners, but we still accept it.”

Fox Searchlight is hoping that audiences will accept the film Hitchcock released Thanksgiving week and just in time for a nod for Sir Anthony Hopkins to win another Oscar. The British actor plays the man himself. In fact, Stephen Rebello, screenwriter of Hitchcock as well as author of the 1990 book Alfred Hitchcock and the Making of Psycho which the film is based on, says, “Hopkins wanted to do this film from the beginning and he would not let go.” According to the author, Hopkins met Hitchcock once and it did not go well, but he loved the work of the notoriously difficult director.

On paper, the story of Hitchcock and his wife, Alma Reville Hitchcock, during the filming of Hitchcock’s masterpiece Psycho from the 1959 to 1960 timeframe might not sound as interesting as it turns out to be. Oscar winner Helen Mirren plays Alma with her usual flair for extraordinaire and there is also the additional cast including Scarlett Johansson, Toni Collette, and Jessica Biel.

On the screen Hitchcock will keep you interested as the ebb and flow of relationships intermingle from film to personal life and back to the behind-the-scenes making of the film Psycho again.

“From everything I have read, Alma did play a big role in Hitchcock’s life,” Faust says. “She was a former editor and had a keen eye. Living with a genius like that, some things rubbed off and I think she was very influential in shaping him and giving him a rock to be crazy against, using her more logical side and sort of reigning in his insanity.”

Rebello, who, incidentally, was the last reporter to interview Hitchcock before his death in 1980, says Mrs. Hitchcock had an unerring eye for what audiences wanted and she had good taste. For example, he says that Hitchcock wanted a jazz score for the horror film but she convinced him it was a bad idea. In the end, composer Bernard Herrmann wrote a tense, hurtling score that defined the final cut.

Rebello says, “Hitchcock made movies for his audiences, but he did not get attention until he died because people did not get it yet.” Faust says, however, that Hollywood genius is usually rewarded with money and Hitchcock was indeed rewarded.

“He was a very successful director in London and overseas and when he came to the states it continued. The studios all wanted to have Hitchcock films and he was very successful as a director. He had some flops but like anyone else, he was always a successful and sought after director and there was a reason he was so powerful.”

Psycho initially received mixed reviews when it was released in 1960, but outstanding box office attendance led critics to reconsider its merits. Faust continues, “Today, as we move forward in film history and learn more about filmmakers Psycho is ranked among the greatest films of all time and is famous for bringing in a new level of acceptable violence and sexuality in films.” But the film almost never got made, as it took some high-power negotiations between the director and his studio, Paramount Pictures, to green-light the project. It wasn’t like the horror genre was lacking; in fact, he had plenty of competition in the marketplace, but Hitchcock knew his film would have audiences screaming in fear, so he made the studio a deal they couldn’t refuse (although they desperately tried) .

He made the film for less money than he was used to making a movie for, but lest we forget, Psycho was not the typical Hitchcock film either. Indeed, most of the lead characters in all of Hitchcock’s films really want to do the right thing, but they are flawed. They either think about doing the wrong thing or they do the wrong thing and then try to get back and there is no way back.

“Hitchcock made Psycho to prove a point and the film was a box office success,” Faust says. “I think it is an iconic film, but for me personally I don’t think it is the ultimate in Hitchcock films.”

“I think we would not have Red Box or it would be a lot emptier if Hitchcock had not been around,” says Faust. “Psychological thriller is because of him,” but Rebello concludes, “I don’t like seeing artists pigeonholed as one thing. I think of Hitchcock as pretty complex and I hope that is portrayed in the movie — kind, flawed, genius, complex, and troubled.”

Complex, funny, entertaining, and with a certain twist of violent humor — that was Hitchcock and in the film or in real life, the bottom line is the man was as complicated as the legacy he left behind.