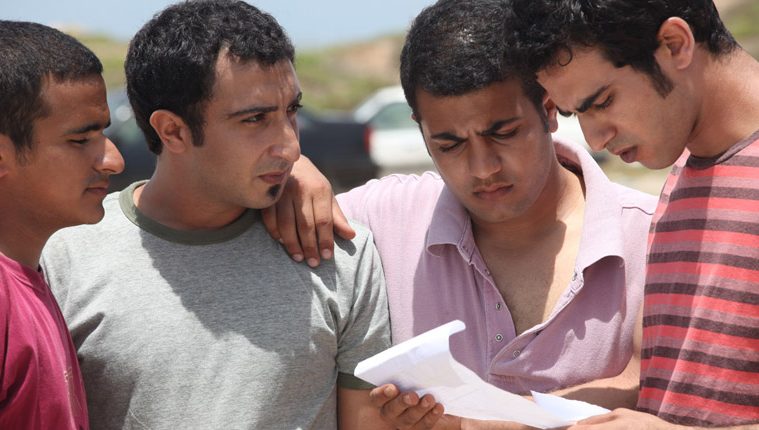 The 16th Annual Jewish Film Festival of Dallas opens September 6 with a slate of ten films, viagra but one title specifically may be the talk of the community. Enriched with fully-developed characters and simple, help rational conversations between two teens, is what makes A Bottle in the Gaza Sea so worthwhile. But some people will find this blending of cultures controversial, given today’s political assumptions.

“But your people have a state and we don’t,” says Naim, a Palestinian who lives in Gaza. “That’s the difference. The dream of having open borders, an airport, a national football team, a normal life without being afraid of what might happen this afternoon or tomorrow, without having to depend on you.”

“A normal life? That I can understand,” says Tal, a 17-year-old French-Jewish immigrant to Israel who lives in Jerusalem. “It’s what I dream of too because I don’t think it is normal to be scared when you’re sitting in a cafe or on a bus or even in your house like the people down south.”

The 2010 Israeli film, having its regional premiere September 22 at Angelika Film Center in Plano, tells the story of an email relationship that develops between two seventeen-year-olds, a male Palestinian and a female Israeli. This Romeo and Juliet type story is based on a 2008 bestselling novel by Valerie Zenatti.

Naim is an intelligent, well-educated, yet resentful, teen. His father was killed in a bombing in Gaza and his mother is a doctor who spends ten days at the hospital after Israel retaliates against Hamas for rockets that hit Beersheva and other southern Israeli towns. Naim dreams of leaving Gaza. Soon after Tal arrived in Israel, a suicide bomber blew himself up in a cafe near her house, killing a girl about her age. She becomes afraid to go to a cafe and jumps off a bus when she sees someone she thinks may be Arab.

Supporters of Israel may be infuriated by this portrayal of Palestinians who want peace. Palestinian supporters will be outraged by the portrayal of Israelis reacting out of fear and a desire for security. Some may be disturbed by the abysmal living conditions of the Palestinians. But Mahmud Shalaby, who portrays Naim, is an Israeli Arab and the Gaza scenes were filmed in the West Bank or in an Israeli Arab town. The poverty and overcrowding through Gaza, in reality, is even more dire than portrayed in the film.

According to Jewish Film Festival co-chair Brenda Marcus, two themes shined in this year’s submissions — Holocaust themes and Arab/Jewish relations. A Bottle in the Gaza Sea was funded by the Israeli film commission. “Had it shown Palestinian leadership in a positive light, it wouldn’t have seen the light of day,” said Peter Marcus, co-chair.

Bottle will be going into wider release later this fall and the Marcuses said the distributor originally didn’t want to rent it to the Dallas festival.

Brenda Marcus said she bombarded the producers and distributor with emails in French and English pleading, “I’ve got to have it,” until they relented. Her tenacity is to be applauded, for those who believe Israelis and Palestinians should find a way to settle their differences and also believe both will flourish after a comprehensive peace accord, will love the simple truths this film unreels in its 90-minute running time.

The 16th Annual Jewish Film Festival of Dallas runs September 6-29, 2012. Films will be shown at three different locations: the Jewish Community Center of Dallas (producers of the event), Angelika Film Center in Plano, and the Studio Movie Grill in Dallas. Among the highlights of this year’s ten selections:

A scene from the dramedy My Australia, 2011.

MY AUSTRALIA
The time is Poland, mid 60s. A fragmented family in a poor neighborhood. The mother, who is separated from her Polish husband, spends most of her time working to provide the basic needs for her two sons, who are 10 and 14 years old. Left to their own devices, the boys join a neighborhood gang with a strong Neo Nazi orientation. One day the gang enters a Jewish neighborhood, beating and stabbing some youngsters, and are arrested by the police. The mother succeeds in convincing the police to release her sons, but is shocked to learn about their involvement with Neo Nazis. She had always thought that she was protecting her sons by concealing her past and origins, but now she must tell them the truth: she is a Jew. A Holocaust survivor, she wanted to raise her sons as Catholic Christians, but she realizes that they cannot continue to live like this and decides to leave Poland. She takes the older boy into her confidence, but the younger son is told that they are immigrating to Australia, while the truth is that they are boarding a ship to Israel. The 2011 film explores the struggle to form an identity in a new country, while trying to build a new life in a foreign country. Ami Drozd directs.

REMEMBRANCE
In this epic romance spanning three decades, a Polish partisan and German Jewish woman forge an unshakeable bond in the dark shadow of the Holocaust. After a daring escape from a Nazi death camp, Tomasz and a pregnant Hannah (impressive leads Mateusz Damiecki and Alice Dwyer) are forcibly separated in the chaos of war, each convinced the other has died. The events of 1944 Poland are crosscut with 1976 Brooklyn, where an older Hannah (Dagmar Manzel) — now a married mother — glimpses a television interview that rocks her to the core. The stunning realization that her lost love may still be alive triggers a spiral of unresolved emotions and moral ambiguities as Hannah must now confront her unresolved past. Based on actual events, Remembrance is a heartfelt journey told with restraint and compassion by award-winning director Anna justice.

A scene from the romantic drama Remembrance, 2001.

MABUL (THE FLOOD)
Everything is complicated in Yoni’s life. He’s almost 13 and smart, but physically underdeveloped. His classmates bully him and his parents barely say a word to each other. As if this weren’t enough, his 17-year-old autistic brother Tomer returns home from an institution right before Yoni’s bar mitzvah. Buried secrets come to light and Yoni’s bar mitzvah Torah portion — Noah and the flood — becomes a metaphor for the family’s fragile and frozen existence. Nominated for six Ophir Awards (Israeli Academy Awards) in 2011. Guy Nattiv directs.

GEI ONI
The story is an historical epic which interweaves the story of the first wave of Jewish European migration to Palestine, at the end of the 19th century, with an unusual love story between Fania, a young Russian immigrant, and Yechiel, a native Jew. Seventeen-year-old Fania, her baby daughter, her elderly uncle, and her emotionally impaired brother arrive at the port of Jaffa, having survived a pogrom in which all other members of their family were killed. Having no real choice, Fania marries Yechiel, a widower whose wife died of malaria, leaving him to care for their two children himself. The two set out to a small settlement near Safed, where Yechiel and a few other daring settlers are trying to cultivate the barren lands which they bought from local Arabs. Fania is burdened by a harrowing secret she is unable to share with anyone else, but unless her husband Yechiel shares her secret, their marriage cannot be consummated.

Tickets to all films are available online: