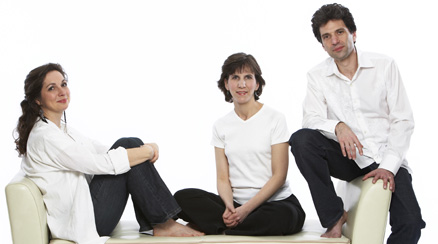 Music Out of the Box

Marina Piccinini will perform in the March “Soundings” concert at the Nasher Sculpture Center.

In 2010, viagra 60mg the Nasher Sculpture Center added a chamber music series to its many other offerings. In keeping with the eclectic quality of its art collection, Nasher’s Director Jeremy Strick, wanted something completely different so he turned to Seth Knopp, a founding member of the award-winning Peabody Trio and artistic director of Yellow Barn, an internationally recognized chamber music study and performance program in Putney, Vermont.

“Soundings: New Music at the Nasher,” is the happy result. Now in its second season, the nearly sold out series has intrigued and delighted classical, as well as world music buffs, throughout North Texas.

Knopp and Yellow Barn have been integral to this effort right from the start. This internationally respected music center is a hotbed of musical innovation and ongoing musical exploration. Its principal activities are a five-week summer chamber music festival/training program for young professional musicians, a training program for high school instrumentalists and composers and a year round series of artist residencies and workshops.

So, what does this mean for Soundings conceptually? Well, past selections have consisted of traditional ensembles, such as the eminent Julliard String Quartet on one bill and street-wise slam poetry of young poets on another. One concert featured the music of Paul Lansky, Georges Aperghis, Johann Sebastian Bach, Dmitri Shostakovich and George Crumb — an unlikely group of composers to find sharing the same bill. Last November, internationally acclaimed clarinetist David Krakauer, a klezmer specialist, was paired with Iva Bittová, a violinist-vocalist who explores the folk music of her native Czech countryside. They added Merima Klju?o, an internationally acclaimed accordionist, and the result took the audience through a modernist take on a vaguely Hebraic-Middle Eastern-klezmer-influenced musical landscape. It was wonderful to be a bewildered visitor in a different world.

So what does Soundings have to do with sculpture you may be wondering.

“In effect, Seth Knopp has curated this series much as we would curate an exhibition or a presentation of the Nasher Collection,” said Strick. “Juxtaposing and weaving together disparate musical themes and forms, highlighting individual works, while creating a comprehensive experience that resonates with and references the art and architecture of the Sculpture Center.”

Knopp points out that the Nasher calls itself a “center,” which speaks of a place in the middle of motion, as opposed to a “museum,” which has more static connotations. Some of the sculpture itself, such as the Calder mobiles, moves and is constantly changing. Also, works from all eras share the space. Knopp trys to emulate this in the concerts, “…by presenting works that show those traditions to be ever evolving through the artists that build upon them.” In other words: Bach and Crumb, Mozart and klezmer, ghetto and grotto.

Knopp said that the original idea was to use the entire gallery. They experimented with some other places, as opposed to the more traditional hall in the basement. At one of the earlier concerts, they moved the audience from the downstairs hall to the upstairs gallery. They all marched up with the accompaniment of a fife and drum.

In November 2010, they did a piece by Peter Maxwell Davies called “Eight Songs for a Mad King,” based on the same potentate as the 1994 movie, “The Madness of King George.” The publisher, Boosey and Hawkes, makes this comment, “The string and woodwind players are the captives of his insanity, intended to play from within giant cages, while the percussionist is his keeper, holding him within the confines of a maddened musical sensibility.”

For the presentation, students at the Greenwood School, which shares a campus with Yellow Barn in Putney, made the cages and the musicians dutifully climbed into them.

“There are a lot of open minds and a sense of adventure involved in Soundings,” Knopp says without a trace of irony.

One amusing story involves a ’60s-era pseudo theater piece/composition, by the adventurous composer György Ligeti, called “Poème Symphonique.” The piece is written for 100 metronomes, wound tightly and then set loose to tick away until they wind down. A tricky feat to pull off as Knopp discovered.

“When we did it at Yellow Barn, we had a complete disaster. Fifteen of the metronomes were brand new and, while the older ones wound down in a reasonable time frame, the new ones just kept on clicking. Eventually, I had to go out on stage and stop them manually. Needless to say, this ruined the effect of waiting for that last tock. When we did the score at Soundings, we had a couple of metronome-only rehearsals to make sure that all wound down at about the same time. It was an odd rehearsal,” Knopp said with a laugh.

The upcoming March 9 Soundings concert continues this offbeat approach. Entitled “Tradition and Invention” traced by the voices of three centuries, the concert will feature flutist Marina Piccinini, violist Kim Kashkashian, and harpist Sivan Magen. They will play the very well-known sonata for that combination of instruments by Claude Debussy and a transcription of Jean Philippe Rameau’s “Pièce de Clavecin.” Typically, there is also a list of unfamiliar composers on the program: Michael Colgrass, György Kurtág, Sofia Gubaidulina and Yoshihisa Taira. The combination will take the audience on a time journey from the late 1600s right up to today.
— GREGORY S ISAACS