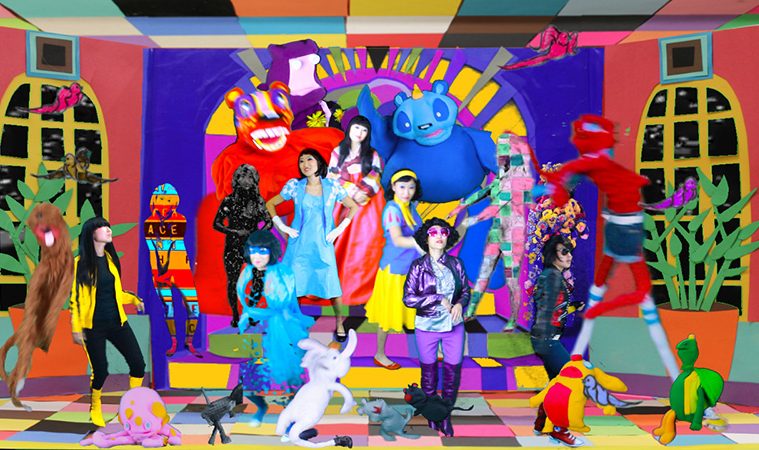 Old and Improved: Art as Wish Fulfillment in CAMH’s A Better Yesterday 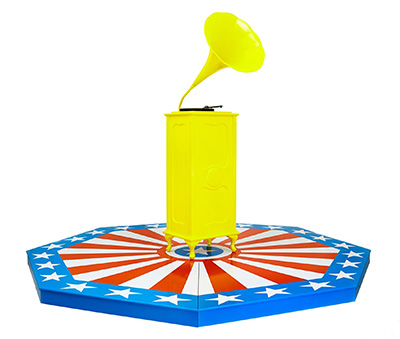 It’s interesting, this idea of A Better Yesterday. It sounds like the kind of wish fulfillment that artists are particularly adept at. So what brought this show on?

BILL ARNING:  I had just seen the Jack Early piece of his life story and listened to the audio of it, having known Jack as an artist through all the ups and downs of his career—including seeing him on and off for 13 years when he wouldn’t show in galleries or museums. He tells it in a sing-songy way and it’s like a children’s story of your life.

So I started looking at other artists who were working along the same lines. At this point, Jack had just done the work where he had his family as sort of life-size pillow stuffed animals where they’re kind of huggable and cute, and I thought, well they’re kind of an interesting way of literally remaking your family in this adorable kind of way. 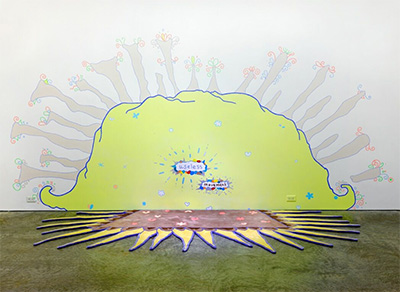 I can see how JooYoung Choi’s fantastic cosmologies might play off that kind of work.

I saw JooYoung’s show at DiverseWorks when it was at the old space. She was doing these stage sets for public access TV shows. It reminded me of growing up and seeing these kinds of shows where … everything seemed magical and I loved that JooYoung Choi was doing it. I’ve since gotten to learn how complicated her cosmology is. Even trying to finish a brief essay on it is difficult because she brings in so many characters. She grew up as one of the only Asian kids in Concord, New Hampshire, and she needed to retreat into these things in order to find a place. And then for her last show at Project Row Houses she gave a quote to the effect of, “Why should imaginary friends be reserved for kids? We should all be able to have all the imaginary friends we want.” That was really fascinating for me.

Then you filled out the exhibition with Lily van der Stokker.

I knew Lily’s work—she’s one of the best-known Dutch artists; she’s shown at the Hammer Museum and many other museums around the world—and I was thinking of her work in a much more straightforward nostalgic way. Then I got to go visit her studio in Amsterdam, and I learned that when she uses dates and times and names in her wall paintings, they can be real or they can be fake narratives. But then there was a series related to a long-term relationship she had with a Dutch filmmaker while he was based in New York, and she did the “Jack and Lily” drawings—like “Jack and Lily have a date”; “Jack and Lily go to Mexico in 1985”—and sometimes those were true and sometimes those were false. Sometimes the drawings were made at the time the date said; sometimes they were made before or after. So it was all about creating the Jack-and-Lily narrative. 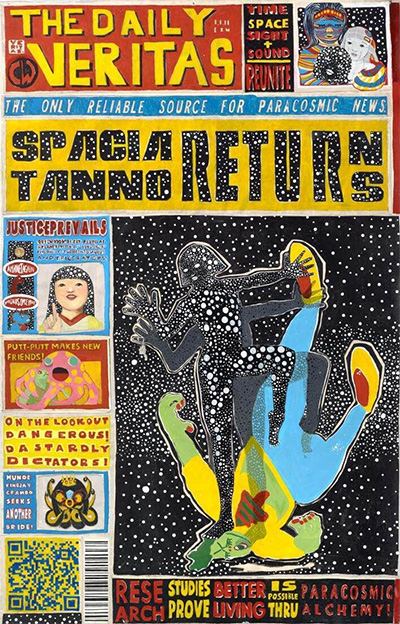 We have a suite of three of those drawings, and she also came back with a drawing for a wall painting that had the words “useless movement.” This came from the idea that when you look back on your past, you know that three years ago this time you were rushing off to a meeting that felt like the most important thing in the world and now you can’t remember what it was. And when you look at the whole your history, there was a lot of useless movement, but it’s not; it’s the way we live our lives. You have to be invested in where you are. So when I saw Useless Movement, I thought that’s a wonderful way of detaching from the past: “I have no idea what I accomplished, but it was a lot of movement.”

How do these artists interact in the exhibition?

They’ll be three separate solo shows under the rubric. So we’re dividing the space into thirds, and they’ll each have a room to do with what they please. In JooYoung’s case, I don’t think any artist in Houston has shown more than she has in the last few years. So she’s bringing all the paintings together, and she’s crazily working in her studio. I love the middle-of-the-night texts about what the characters did in the night.

One of my favorite elements of Jack’s show relates to the first time he remembers making a decision based on aesthetics, which is when his parents let him pick out the wallpaper for his room and he found this soldier wallpaper. In his proto-gay mind, the soldiers were all boyfriends, so when he remade the wallpaper (in his art), he moved them together so they were couples. And he remembers matching the trim of his walls too. He said in that moment he knew he was gay.

I guess the two discoveries went hand in hand.

I had soldier wallpaper too, so when I saw that in the studio, I was like, yeah, I get this.