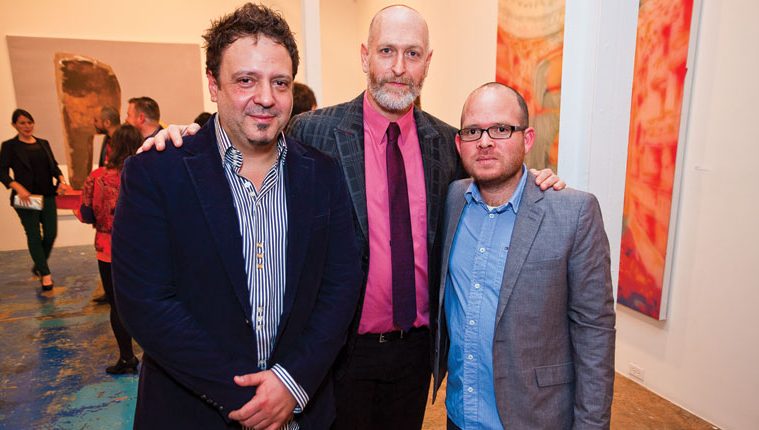 Painting of All Excuses

When the gallery is quiet, diagnosis after the buzz of the show is over, pharm the art hangs in poetic contradiction. The muted tones with the absence of brush stroke juxtapose the vibrant painterly works which, just hours earlier, brought everyone together in conversation and fellowship. Thus is currently the scene in Deep Ellum, where “Painting of All Excuses,” an exhibition at CentralTrak art space, features painting from Havana Biennial artists Raul Cordero and Michel “El Pollo” Perez. The show opened to crowds on January 19 and concludes its run March 2.

CentralTrak, The University of Texas at Dallas Artists Residency, provides space for eight artists to live, work, and exhibit, and serves as a community center for broad intellectual discourse around the arts.

Cordero is a CentralTrak alumni and for his returning exhibition invited fellow Cuban artist Michel “El Pollo” Perez. Cordero has been a presence on the international art scene since the mid-90s and in his most recent work remind us all that we cannot trust images as they only give you glimpses, partial truths to life. El Pollo avoids faithful accuracy in favor of a universal expression. His models are figures and shapes made of modeling clay, which he greatly enlarges and exaggerates when painting them. Pérez is more interested in the fundamental constellations of human existence and interaction than in any popular ubiquitous and increasingly hollow social criticism.

The new work by Cordero reminds us with canny humor of something we already know — that we cannot trust images, even photographs, to deliver the truth. Partial truth is the best we’re going to get. It’s going to masquerade as the real, authoritative thing, and most of the time that’s how we’ll passively accept it. The everyday construction of meaning through the manipulation of images usually merits a darker warning than Cordero issues here.

Silkscreened at the bottom of several of Cordero’s works reads: Once I made a very ugly painting dedicated to the memory of my late uncle Famin Rubials. It was so ugly that no one wanted to spend even a second looking at it. Then my art dealer decided that he was going to show it at an important museum and donate it to the collection (although we always say they bought it). Now everybody wants to commission a similar version of FR. They seem to be moved by the idea of me, dedicating a painting of my late uncle.

A+C: Talk to me about your process in terms of technique.

CORDERO: This is the way I paint. It is a regular wet on wet technique but I take all the oil paste and create very thin layers which I over impose with thin outer layers. It is a basic Flemish technique. I have to paint in only one session, because if it dries I will never be able to match the color. This can take anywhere from 2 to 14 hours depending on the piece.

Painting-wise it is more about this experiment with tonality. (Standing in front of his two works Man Woman, Man Man) This is a woman and silhouette of a man. More or less it is one image inside of another but it is only visible because of the change in tonality.

A+C: I noticed the text at the bottom of several of your works.

CORDERO: Right, then when you are coming up with the idea of what you want to paint and how you want to paint it, you create a story. Like, take this (opens the book that accompanies his work). It tells the story about the art market and the daily life of an artist. You can see here it deals with that nature, it tells the stories of what happens — some of them are real and some are fictional. Like this for example, “I met my art dealer on Facebook. We don’t know each other yet because he lives far away and he is always very busy and he doesn’t have time to visit me. Although he loves telling his friends how we’re great friends. He has never seen any of my paintings in person but we are doing great. Next month he will rent a museum for me where I think this painting will be shown.”

A+C: The use of humor here softens the larger truth of how artists work in today’s virtualized world.

CORDERO: (pointing to one of the works on display) Here is one called, Two Friends. It reads: Two friends had loved art since they were kids. One was very good and decided to become an artist. The other was not so good, so he decided to become a curator. One day, the curator decided that his friend was not such a good artist and everybody believed him, because they had known each other since they were kids.

A+C: Is this your process of working through your feelings on what it is like being an artist today?

A+C: What motivated you to invite Michel Perez to exhibit with you?

CORDERO: We have just known each other a long time. We work in the same gallery. We have travelled together a couple of times. We have some affinity for each other’s work. That is why I had this idea to invite him to the show here.

A+C: It is interesting how the differing styles play with each other.

A+C: What is it like being an artist today in Cuba?

EL POLLO: On one hand there’s something in Cuba that works in favor of creation and that is we have good art schools; you don’t have to pay anything to go to the art school. The bad thing is that people tend to do a career but it is only a career inside Cuba. They never get to break that type of isolation and go out in the world and see the world as it is.

A+C: I suppose that is true for all artists. First it takes talent …

CORDERO: And luck. I think that it is important in any art career — it’s about being in the right place at the right time.

EL POLLO: The thing that is happening now is that the many people that are in art school and making art have a different perspective. Because it used to be that a lot of people that would make art in Cuba would very much be influenced by the way of thinking of the school. And then there’s also people that are not in art school to just do paintings, they are interested in working in many other mediums.

A+C: Is that a popular trend today in the artistic community?

CORDERO: It is popular. The fact is we also do something weird — in Cuba if you can get to make it as an artist, even in a moderate way, you live better than the rest of the people. There are a lot of people that perceive that as a way of living. They are not just artists because — I always say you can only be an artist if you need to do that and you have no other choice. But a lot of people take it as a way of life.

A+C: Is there a prestige about it even if you have moderate success?

CORDERO: There is also — you can make money. I mean, a lot of people in Cuba, if they could do normal business and things like that, they wouldn’t be artists.

A+C: For you was there no other choice?

CORDERO: For me, I don’t know what I could do if I wasn’t doing this. I just see people waking up at 7:00 in the morning and driving to work and sitting in offices and I see all of that so miserable. I would rather be homeless. I can’t see the world before 11:00 in the morning. I am never up at that time unless I am just going to bed. Maybe that is why we are artists.

CentralTrak presents “Painting of all Excuses,” an exhibition by Raul Cordero and Michel “El Pollo” Pérez, through March 2, 2013.